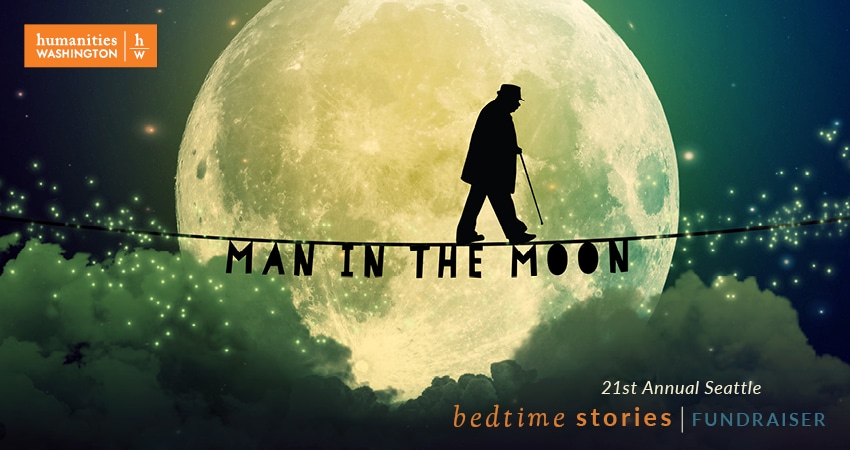 Bedtime Stories Spokane is our annual fundraiser in support of Humanities Washington’s work. The event raises critical funds to create “public squares” across the state—places where communities come together to explore ideas and new perspectives.

At Bedtime Stories, Northwest writers unveil original short stories created just for the event. Join us for readings by Northwest authors Charles Johnson, Claudia Castro Luna, and Sonora Jha based on this year’s theme, “Man in the Moon.” The evening will also feature the presentation of the Humanities Washington Award to Kenny and Marleen Alhadeff for their significant contributions to the Seattle community.

Charles Johnson is the author of over 23 fiction and nonfiction books including Middle Passage (winner of the National Book Award in 1990), Nighthawks, The Way of the Writer, and Dr. King’s Refrigerator and Other Bedtime Stories. He is the recipient of a MacArthur Genius grant, NEA and Guggenheim fellowships, two Washington State Governor’s Awards for literature, and numerous other accolades. He is a professor at the University of Washington and lives in Seattle.

Claudia Castro Luna is the current Washington State Poet Laureate. She is the author of the poetry chapbook This City and the collection Killing Marías, and is the creator of the online poetry projects Washington Poetic Routes and Seattle Poetry Grid, the latter of which was featured on PBS NewsHour. She was recently the recipient of a major grant from the Academy of American Poets to present One River, Many Voices/Un Río, Muchas Voces, a series of readings and workshops in communities along the Columbia River. She was previously the Seattle Civic Poet, a teacher, and urban planner.

Sonora Jha was born in India where she worked as a journalist in Mumbai and Bangalore. She is now a professor of journalism at Seattle University. Her first novel, Foreign, was published in 2013. She was the 2016-18 Writer in Residence at the Richard Hugo House and is an alumna and Board President for Hedgebrook Writers’ Retreat. She is currently writing a book of essays about how to raise a feminist son and is working on a second novel.

How can poetry help with grief?