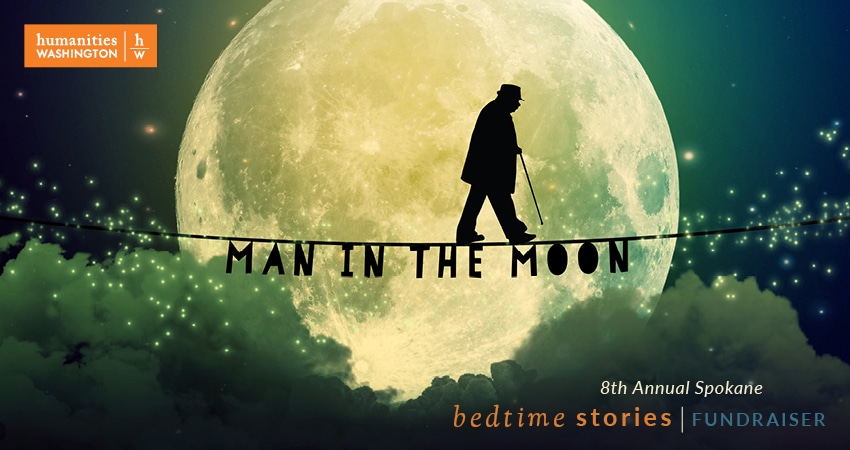 Bedtime Stories Spokane is our annual fundraiser in support of Humanities Washington’s work. The event raises critical funds to create “public squares” across the state—places where communities come together to explore ideas and new perspectives.

At Bedtime Stories, Northwest writers unveil original short stories created just for the event. Join us for readings by Northwest authors Jess Walter, Sharma Shields, and Ben Goldfarb based on this year’s theme, “Man in the Moon.” The evening will also feature the presentation of the Humanities Washington Award to The Salish Language School of Spokane for their significant contributions to the Spokane community.

Jess Walter is the author of six novels, most recently Beautiful Ruins. A finalist for the National Book Award in 2006 for The Zero, Walter won the Edgar Allan Poe Award for Citizen Vince in 2005 and the Pacific Northwest Booksellers Award in 2007, and has been a finalist for the LA Times Book Prize and the PEN USA Award in both fiction and nonfiction. His stories have appeared in Harper’s, Esquire, McSweeney’s, Best American Short Stories, and Best American Nonrequired Reading, among others. His books have been published in 22 countries and he recently adapted his novel The Financial Lives of the Poets for film. He lives in Spokane.

Sharma Shields is the author of a short story collection, Favorite Monster, and two novels, The Sasquatch Hunter’s Almanac and The Cassandra. Sharma’s short stories and essays have appeared in The New York Times, Electric Lit, Catapult, Slice, Fairy Tale Review, Kenyon Review, Iowa Review, Fugue, and elsewhere and have garnered such awards as the 2016 Washington State Book Award, the Autumn House Fiction Prize, the Tim McGinnis Award for Humor, a Grant for Artist Projects from Artist Trust, and the A.B. Guthrie Award for Outstanding Prose. Shields has worked in independent bookstores and public libraries throughout Washington State and lives in Spokane with her husband and their young children.

Ben Goldfarb is an environmental journalist and the author of Eager: The Surprising, Secret Life of Beavers and Why They Matter, winner of the 2019 PEN/E.O. Wilson Literary Science Writing Award. He is recipient of a 2019 Alicia Patterson Fellowship, through which he’ll be covering the global ecological impacts of roads. His writing has appeared appeared in Mother Jones, The Guardian, Science, The Washington Post, National Geographic, Scientific American, and other publications. His nonfiction has been anthologized in the collection Cosmic Outlaws: Coming of Age at the End of Nature.

What do Northwest writers actually write in?