The History of the Civil War Through Music

Speakers Bureau presenter Hank Cramer shares the history, stories and music of the Civil War, through the eyes of his great-grandfather.

A folksinger for over 20 years, Hank Cramer has always been passionate about music, just like his great-grandfather, who was a singer and a cittern player during the era of the Civil War.

When attending one of Hank Cramer’s Speakers Bureau presentations, you would swear that the American Civil War happened yesterday.  Learning about a soldier’s experiences is powerful. Knowing —and relating the experience through history, music and stories through someone who had actually been in the war —- exaggerates the sentiment exponentially.  This is just what Hank Cramer does, and why his presentations are so compelling.

Cramer is a well-known folksinger in the Northwest. His great-grandfather, Wilson Cramer, served in the Union Army throughout the Civil War, fighting in several major battles and receiving the  promotion in rank from Private to First Sergeant during his service. Though Wilson Cramer survived of all the battles, the war took one of his brother’s lives and injured the other three. The traumas of the war led him to become an itinerant preacher later in his life.

Having once served in the Army himself, Hank Cramer shares the story of the Civil War through his great-grandfather’s experiences in his presentation, Through a Soldier’s Eyes: Wilson Cramer’s Civil War, as part of Humanities Washington’s Speakers Bureau. In addition to sharing his grandfather’s experiences in the war, Hank Cramer also plays some of the songs of the era to  provide an opportunity for audience members to look into lives behind the Civil War. As an historian, educator and beloved folksinger, Hank integrates music and history through his way of storytelling to encourage audiences to think, learn and engage in conversation about the rich history of American Civil War.

Hank Cramer recently spoke with Spark to share insights about this presentation.

Hank Cramer: To me, it was a very powerful experience (to learn about my great-grandfather), a young man leaving home really for the first time and then serving for a cause – to keep the Union together (and) to free the slaves.  He had the experience of seeing that cause through, but also seeing the horror of war and how many friends he lost during the course of the war, the price he paid.

When the war was over, for a few years he worked at a regular job, at a dry goods store, and eventually became a preacher. He traveled all around Pennsylvania founding new churches and congregations.  I think, in a lot of ways, that was his way of rebuilding and renewing, whereas war had been such destruction. By becoming a traveling preacher, I think he was able to apply salvation instead of destruction. I think it is a very powerful story, a powerful theme in his life, how he survived the war and saw the causes achieved, preserving the Union and freeing the slaves, but at such a very high cost.

I became a soldier and spent 28 years in the Army myself.  When I was a young man, I think I didn’t have much insight into my great-grandfather’s experiences, but as a solider, my perspective broadened.  As I went to war, I think I gained a lot more insight and a lot more empathy for what my great-grandfather must have gone through. That’s part of why I want to present the war through his eyes.

Cramer: Simply because I love both of those things. I studied history in college and I have taught history. I have a real passion for music and, after a while, I found the real boundary (division) between the two.  When I would read history and then find the songs from that period, the songs would make the history clearer to me. History can teach you the facts, but the songs bring out the feelings and the passion of the time.

What I want to do is not just talk about the Civil War as a modern historian,but actually, for less than an hour I want to be my great-grandfather, going back in time.  Every song that I sing will be a song from the era that he would have known.

HW: What and why do you think people should know about the music from the Civil War? 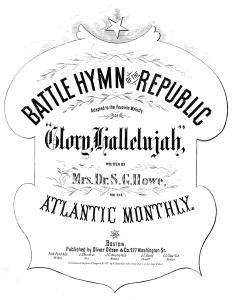 “The Battle Hymn of the Republic” written by Julia Ward Howe is one of the best-known folk songs from the Civil War era. “I would just like to ask her what inspired her (Julie Ward Howe) because the words are beautiful and very powerful,” says Cramer.

Cramer: I think it’s important for people to understand how the music of a particular era can  reflect the moods and the thoughts of people of that era. I can do that in different ways. When I look at the songs from the Civil War, they were very optimistic and idealistic. People of the era had clear goals that they wanted to achieve. They wanted to preserve the Union, and they wanted to free all mankind. The messages that they put into the songs are very powerful.

If I compare another era, like the 1930s when we were in the middle of a terrible Depression, the music from that era also represents what people were thinking about, but in an indirect way. For the most part, people didn’t want to talk about sadness and how poor they were and how hopeless they felt. Instead, music became an escape. People wrote songs about being happy and giddy and dancing and having a fun time, so really the music from the 1930s was an escape from the overwhelming sense of desperation that people felt.  The music of the Civil War, I see as (having) a very uplifting and positive message. I can see that the music reflects the mood and what is on people’s mind, but not always directly.

HW: In your opinion, what is unique about folksongs? How are folksongs different from other means of storytelling in terms of delivering messages?

Cramer: (They) can represent many people’s voices, because with a copyrighted song, the songwriter writes the words which remain permanent.  For folksongs, sometimes the melodies last for three-to-four hundred years, and different people, as they go through their life experiences, go ahead and change the words of the songs. In some cases, they completely replace the words and write a whole new set of words to the songs, and that’s why finding out about the origins of folksongs is fascinating to me.  For example, you might find a song that takes you back to the 1600s and then find different versions of it over the years where people have written different words tothe same melody. A folksong is a living thing. In some cases, they are hundreds of years old, and continuously changing to match the times.

HW: How do you hope your presentation will provoke discussion about the history of the Civil War and the music behind it?

Cramer: First of all, people may look for a universal message.  I think that if there is anyone who is a Vietnam veteran or an Afghanistan veteran, or even a family member of a veteran, they will look at (the) parallel between the Civil War (and) Wilson Cramer’s experience, versus those of … modern veterans. Another question I think will provoke discussion is: “To what extent were our dreams realized in the Civil War?” It was a very (idealistic) battle to preserve America as a country (and) to free the slaves. I think it will be a good time to (have) the conversation, to see how free are we (are) and how much, or how little racial prejudice, still exists in America in this age, compared to 150 years ago.

Editor’s Note:  In 2015-2016, Hank Cramer will present “One Trail, Many Voices:  Songs of the Oregon Trail” as part of Humanities Washington’s Speakers Bureau series.  For details about booking him for a presentation, contact zaki@humanities.org.