Photo by Rose Gudex Back To All Blog Posts

Speakers Bureau presenter Anu Taranath’s library contains lessons for life, ethical dilemmas, and debates on identity and race, all between the covers of children’s books.

All the children’s books in Anu Taranath’s library — two hundred or so — were chosen because they can teach crucial lessons for living in the world. Small wonder that one of them is from Sesame Street.

Red Or Blue, I Like You!, a 2007 book by Sarah Albee and Tom Brannon, finds Elmo the red monster visiting the home of his blue friend Angela, and vice versa. There the things they have in common, and the things that make them distinct, come into clearer focus.

“It’s an exciting tale for kids because it’s colorful and it’s about playing, but for us adults, it’s a great invitation to sit and think,” says Taranath, a University of Washington professor and consultant. “What assumptions do I bring when I meet someone different than me? What kind of judgments and mental chatter do I have running through my brain about “those people” at all times?”

A new look at fiction written for children can help adults refresh their view of the world, Taranath argues in her Speakers Bureau talk, “Not Just For Kids: How Children’s Literature Inspires Bold Conversations.” Many of these small tales for young people teach basic tools for living together in a diverse society, and those lessons can hold value for their parents as well.

“Many people I talk to think child’s literature is cutesy — that it shouldn’t be political or inflammatory,” Taranath says, “when in fact there’s a whole lot happening in children’s literature itself.”

Humanities Washington: How did the idea emerge of using children’s literature as a lens for looking at the world?

Anu Taranath: Maybe for a couple of reasons. As a person of color growing up in the U.S., many of the books that I read as a child did not feature any kind of diversity in terms of race and ethnicity. And sometimes when you are reading what is not you, that’s really exciting — but sometimes, it’s also a testament that you don’t matter and don’t belong. Since I was young I’ve been really aware of who reads what and why. Somewhere in my late teens and early twenties, I started to create a collection of children’s books from around the world, that I would see at thrift stores or garage sales or on my travels elsewhere. I’ve used it as an archive of sorts in a lot of my work over the years. 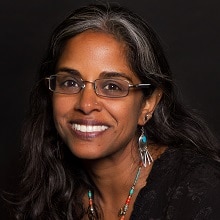 Another reason that I chose children’s books is because there are so many good-intentioned people who want to be more inclusive these days, and books represent one way to do so. I know many teachers, librarians, community center staff, who have realized many of the books they have are not representative of all the people that they serve, and they would like to have their books reflect more of the people. … I wanted to take that very sweet notion and try to take it one step further by creating a program around children’s literature that asks, who’s been published? Who’s not being published? What do you think that means? Can books help us get along better, and if we think so, how? If not, what do we do? And hopefully in a gentle way it brings people together to deepen their own capacity for having what are often uncomfortable conversations about identity, society, and race. Those are often slippery conversations to have these days, and children’s literature seems like a really safe, neutral non-confrontational way to have them.

Humanities Washington: I’ve read interpretations of Curious George as an immigrant story, and Goodnight Moon as a story about death. Do those ring true?

Anu Taranath: Certainly. I think the books that become classics for us are because of the illustrations and the cadence of the words, but also because they touch on something else. Goodnight Moon is so popular because I think it tugs at our heart with what’s real and what’s possible and what else is there. For some people it’s death, for others spirituality, for others it’s goodness. The books I gravitate to are the ones that talk about society and belonging and not belonging, and often do so in subtle ways. Sometimes books discuss these issues in pretty obvious ways too — the child that’s bullied in school, the family that doesn’t feel welcome when they move — but there are also books that talk about the heterogeneity of us as a people.

Humanities Washington: How do you pick books for your library that meet those tests?

Anu Taranath: I think it’s kind of capricious — whatever strikes my fancy, whatever appeals to me. And it’s important to note that in my library of children’s books at home, it’s not just about characters who are brown or black, who have two mothers or two fathers, or represents a child in a wheelchair. I like books that ask us to ask hard questions, books that might make us have to rethink what we know. That to me is the exciting part. If you’re open to what a book can teach you, if you’re open to asking those hard questions of yourself, it can really deepen who we are. For example, I’d like to have as little contradiction between the values that I believe in and the actions that I take. If I think I’m a well-intentioned person, and yet my mind is really occupied with a lot of judgments about people, that doesn’t really match. Children’s books, because they’re often simple, can help us ask complex questions of ourselves.

“I like books that ask us to ask hard questions, books that might make us rethink what we know.”

Humanities Washington: Are there trends you notice in kids’ literature? Things changing as the world does?

Anu Taranath: These days in U.S. publishing, there are two trends I think that are important. One is that the number of books published that feature characters of color is minuscule compared to the number of books that feature white characters, inanimate objects like talking trucks and talking trains, and fluffy rabbits and foxes. The statistic these days is that 10 percent of publishing focuses on characters of color. That’s wholly bankrupt if 40 percent of our students are children of color. Secondly, there’s a lot of bold literature being published in the last ten years that talks about having two mommies, being a kid of color, or having one parent who is transitioning their gender. These two trends might seem contradictory, but they’re happening at the same time.

Humanities Washington: How does children’s literature become great? What does it take for a story to take hold with a wide world of readers?

Anu Taranath: Well, maybe we should ask who first says they’re great. When we talk about the British canon or American canon, we say, “These are the great works of art,” or, “These are 100 books all kids should read.” I often come to those with a bit of skepticism about whose work is great and whose is not, because I’ve seen so often these lists actually reflect those who have more power in society. Whose worldview is being reinforced or challenged in these lists? If your culture is reflected everywhere, you don’t even need to talk about it, because it’s just normalized. It’s just “regular” and how things are. It’s only when you do have a different perspective that challenges what is seen as regular, that a light shines on what needed to be said before.

As a member of Humanities Washington’s Speakers Bureau, Anu Taranath is traveling the state presenting her free public talk, “Not Just for Kids: How Children’s Literature Inspires Bold Conversations” at venues around the state. Find an event near you.