Amy Wheeler on Hedgebrook and the LGBTQ Themes in Her Plays

The executive director of Hedgebrook writers retreat talks about the messages within her plays and balancing being a playwright and an organizer.

Amy Wheeler came looking for a place to write … and stayed.

Since 2006 the playwright has held a “day job” as executive director of Hedgebrook, a 24-year-old retreat for women writers on Whidbey Island, where she first came seeking a place to craft her stage plays.

For information on becoming a sponsor or purchasing a table, contact Kari Dasher at (206) 682-1770 x103 or kari@humanities.org.

Wheeler earned her master’s from the Iowa Playwrights’ Workshop and proceeded to create eight produced plays – some of them gestated at Hedgebrook, where she first came after winning a residency in 2002. That year, she wrote her first draft of a three-act play during five days in a Hedgebrook cottage … and the production went into rehearsal two months later. Her gratitude to Hedgebrook led her to join the board the following year, and finally throw her hat in for the directorship.

Wheeler appears Oct. 12 at Humanities Washington’s Bedtime Stories event in Seattle. Her plays include Wizzer Pizzer, KISS IT and Weeping Woman, performed in New York, Atlanta, Portland and elsewhere. She often tackles themes of queerness: In Wizzer Pizzer, L. Frank Baum’s Dorothy is cast as a gay man seeking his own happiness, the Witch is a manifestation of Dr. Laura Schlessinger, and the clinic that aims to “cure” its clients of homosexuality is called Getting Over the Rainbow. 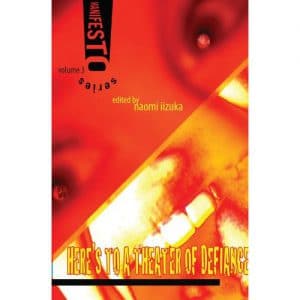 Wheeler’s latest, Wizzer Pizzer, can be found in Manifesto Series V.3: A Theater of Defiance.

Humanities Washington: Many, many writers have created their best works in artists’ colonies or other self-contained worlds like Hedgebrook, that are set apart from mainstream communities. How important is “retreat” – that is, solitude, comfort, freedom from distraction – to a writer’s creative process?

Amy Wheeler: Retreat is essential. Especially in our fast-paced, plugged-in lives, it’s necessary for artists to have a place to go to be quiet and settle into the world of our work. It’s a paradox that to write about the world, you have to leave the world to some extent. So to be in solitude, without distraction, where you can keep your mind puzzling on the knot you need to untangle in your story, or to do the deep diving necessary to get to the heart of what it is you’re trying to say, is a rare gift. It’s so hard to find that head space in “life” – there are so many things that take you away from it. For me personally, the internet is my diversion of choice. If I can’t figure out a scene, I jump to email or Facebook – or Wikipedia, where I can convince myself I’m doing research. Then it’s down the rabbit hole for the rest of the day. At Hedgebrook, our cottages aren’t wired, so when you want to get on the Internet, you have to get up from your desk, walk out of the cottage and down the path to the pumphouse. It’s not a long walk, but it’s an intentional one. You have to be mindful, fit it into your day rather than having it at your fingertips as a constant fall-back plan. The other thing that’s often unexpected for writers coming to Hedgebrook is the importance of being in community with other artists, sharing a meal at the end of a day of being alone, coming back out of that head space and talking about where you’ve been, what you discovered, or where you’re blocked. Commiserating, encouraging each other to get back to your desk the next day. The balance of solitude and community, with delicious meals prepared for the writers-in-residence by Hedgebrook’s chefs from produce our gardener harvested that afternoon, is what we call our “radical hospitality.” Every artist needs it.

HW: Your play Wizzer Pizzer was produced in 2005, and aside from its very non-Wicked take on The Wizard of Oz, it also satirized the ex-gay conversion movement. That movement was a lesser-known quantity then, and has since gathered a lot more media scrutiny. (Think Marcus Bachmann and Chick-Fil-A.) Do you feel prescient?

Wheeler: I wish I wasn’t! Although I do believe it’s the artist’s work, responsibility even, to blow the whistle, sound the alarm, raise the flag and point out the fact that the emperor is indeed naked. And sometimes that causes us to be, or to seem, prescient. But the truth is, when we – as a people, as a culture – repress our feelings, or suppress the truth, or oppress each other – those feelings and truths and ideas are still there, simmering under the surface. And they will continue to come bubbling up to be dealt with. So, the idea of reparation therapy, or “healing homosexuals,” is surfacing because there is once again a political climate that is trying to engender fear of homosexuals, and to turn gay people on themselves. Which, I believe, is a backlash to the positive attention going toward “It gets better” and marriage equality. You know your movement is gaining ground when the backlash is virulent…. I wish my play weren’t still relevant this many years later. But since it is, I hope it gets produced all over the place – and the dialogue it provokes causes real, lasting civil rights change to happen.

One of the cabins at the Hedgebrook retreat

HW: There are writers who want to change the world, and writers who just want to tell a good story. Is an activist message foremost on your mind when writing a play or other piece, or do the needs of plot and character interaction shape the message?

Wheeler: I want to change the world through a good story. But most often, and especially in recent years, I’d have to say that message is foremost for me. I create characters who can carry that message by being in conflict with each other. They don’t all agree with each other, or with me, and that’s key! I don’t write “message plays,” I write plays that raise questions and provoke dialogue. I’m the kid of a preacher and a teacher who was also an actress — a couple of intellectual, dramatic, dynamic people. So in a lot of ways, theatre is my church. It’s where I can bring my angels and demons to life and have them battle it out. It’s also where I can be in dialogue with other people about the things that keep me awake at night. And when you get down to it, theatre and church have a lot in common: ritual, spectacle, dramatic storytelling, music, a communal experience, the symbology of myth, the drinking of wine. But unlike most churches, the theatre can be provocative and irreverent, sacred and profane. It challenges your beliefs and makes you question authority. I need that in my life.

Wheeler: It’s a challenging time, there’s no doubt about it. But what we’ve found at Hedgebrook is that our message to support women writers who are authoring change through their work as a way to give voice to causes that you care about is resonating with people. So we’re thriving in unexpected ways. In challenging times, we come back to the arts to help us make sense of what’s going on, and to find a new way together. My sense is that the arts organizations that are thriving now are being innovative and forward-thinking, trying new ways of approaching their programs, sharpening their message, affirming their core supporters and reaching out to new audiences. When the going gets tough, the tough get creative! And Seattle arts organizations are a hearty, resourceful lot.

HW: Does your work as an organizer and curator ever conflict with your personal writing, in terms of demands on your time and so on?

Wheeler: Oh my gosh, yes! All the time. It was especially true when I took the position of executive director in 2006. Hedgebrook was in a big transition, as was I — and I was a writer and teacher, who knew how to raise money, but had never run an organization before. So there was a learning curve, and an economic shift and a heckuva ride for a few years! But I’ve grown, and so has Hedgebrook, and over the past year or so, I’ve come back to my own writing. Which is thrilling, because I realized a couple of years ago that that part of myself — my playwright — had basically gone to sleep. And I had to wake her back up, and find space for her, and she and Lady Hedgebrook needed to find a balance together. And we’ve done that over the past year. It’s always amazing to see how you’ve grown and changed when you’ve been away for awhile.