Philanthropist Ellen Ferguson and poet Tod Marshall will be recognized for outstanding achievement in the public humanities at our Bedtime Stories fundraising events in October. 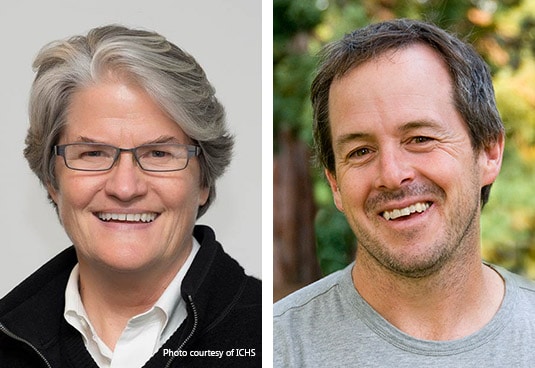 We’re excited to announce that philanthropist Ellen Ferguson and poet Tod Marshall are the winners of the 2015 Humanities Washington Award.

The award recognizes outstanding achievement in the public humanities in two categories: “Philanthropy and Leadership” and “Scholarship and Service.” The awards are presented annually to two individuals or organizations whose time and talents enlarge the meaning of the humanities in our lives and whose work reflects the spirit and programs of Humanities Washington. Ferguson is the winner in the Philanthropy and Leadership category, and Marshall in Scholarship and Service.

The awards will be presented at the two Bedtime Stories fundraising events held by Humanities Washington on October 2 in Seattle and October 23 in Spokane.

Poet and Gonzaga professor Tod Marshall was the first in his family to attend college—an experience that inspired him to bring humanities education to underserved populations.

“As a first generation college graduate, I never forget how empowering exposure to culture can be,” he said, “and I know that it’s very important to build cultural bridges between academia, where I work, and larger communities, where I live.”

He participated in Humanities Washington’s first Clemente Course in the Humanities, a program that teaches the humanities to economically disadvantaged college students. More recently, he became a scholar for Prime Time Family Reading, a program serving at-risk children and families that combines reading, storytelling, and discussion to encourage reading and library use. In Prime Time, he worked tirelessly to increase participation in the program and even revised the curriculum to increase families’ comfort level with the material.

Marshall earned an MFA degree from Eastern Washington University and a PhD from the University of Kansas. He is the author of the poetry collections Dare Say, The Tangled Line (a finalist for the Washington Book Award), and the recently published Bugle. His collection of interviews with contemporary poets, Range of the Possible, was named to the New York City Public Library Poetry Book List for 2003.

“Tod’s commitment to the public humanities through his work with Humanities Washington has been constant and significant,” said Ziegler. “Between his mentoring college students, leading humanities programs for underserved populations, public radio appearances, and his writing and teaching, I have no idea how he has time to sleep.”

From the very start of her career, Ellen Ferguson has thought creatively about bringing cultural experiences to the people of Washington. As a graduate student in museology at the Burke Museum, Ferguson wanted to provide cultural enrichment to patients at Seattle Children’s Hospital. But to bring natural and historic objects into an environment that must be highly sterile was a challenge. So Ferguson developed the Burke Box, which contained museum objects capable of being washed, sterilized, and handled, along with an educational curriculum. Ferguson created the Burke Box 35 years ago, and continues bringing this content to patients to this day.

Ferguson was raised in a family of prominent philanthropists, and is the president of the Hugh and Jane Ferguson Foundation. The Foundation has regularly supported Humanities Washington since 1997, most recently with a two-year grant for our Speakers Bureau presentations in museums.

Ellen Ferguson and her late father Hugh Ferguson were honored on National Philanthropy Day in 2001 as the state’s outstanding philanthropic family.

“She is not only a generous financial supporter of culture and the humanities,” said Ziegler, “she is a boots-on-the-ground leader in the community who works tirelessly to help make Washington State the thriving cultural hub that it is.”

Julie Stein, executive director of the Burke Museum, said, “When you are in a meeting with Ellen, you know that she will sit there and absorb the conversation until the point when she speaks a pearl of wisdom that renders the group speechless.”

Hear Tod Marshall read his poem “Three Dreams from the Eastside of the Mountains” on KUOW here.