Debbie Cruz, her husband Rocky, and their three children pose with a traditional Marshallese Tipnol canoe, part of the Burke Museum's Contemporary Culture collections. Canoes will be an entry point into a celebration of Marshallese culture in the Burke's Home and Away: Canoe Stories of the Marshallese Community in Auburn. (Photo credit: Holly Barker, Burke Museum) Back To All Blog Posts

“The Washington Stories Fund brings a larger megaphone to those communities whose stories can help us better understand our state and each other.”

Newly discovered art from a prominent Native artist, Marshallese canoe journeys, North Central Washington tribal history, and an oral history exhibit are the focus of four projects awarded Washington Stories Fund grants in 2019. The purpose of the fund is to record and widely share the lesser-known stories of people or communities in our state. Started with generous seed funding from the Lenore and Charles Hale Family Fund, the Washington Stories Fund is a tool to dismantle barriers and add to the cultural richness of Washington State.

“Too often the stories of one culture dominate, and the voices of groups who might lack connections, power, or resources are buried,” said Julie Ziegler, CEO of Humanities Washington. “The Washington Stories Fund brings a larger megaphone to those communities whose stories can help us better understand our state and each other.”

Any nonprofit organization can apply, and recipients are selected once per year through a competitive process.

Portrait of Gene: An Artist, a Time, and a Tribe 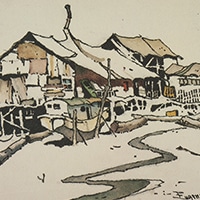 Eugene Landry (1937-1988) was an artist from the Shoalwater Bay Indian Tribe in the Willapa Bay area. He created a large body of work that went missing after his death. Tokeland artist Judith Altruda recently discovered more than 70 of Landry’s paintings in the attic of an old building where it had been stored for 25 years, forgotten. Despite decades of exposure to dampness, cold, and rodents, much of the collection was salvageable. Altruda began the meticulous cleaning and restoration process determined to bring Gene’s art and the stories it tells back into the daylight. Gene created many portraits in his post-impressionistic style.

In an effort to learn more about the artist’s personal history, Altruda spoke with some of his models, now elders in the tribe. Their stories create a portrait of the artist that is both intriguing and inspirational. Despite an illness suffered during his teens that left him severely disabled, Gene attended art school in Seattle during the early 1960s and went on to have a prolific art career. Unfortunately, today Landry’s work is largely unknown off the reservation. His art and story offer untold history and perspective on challenges faced by Native Americans in Washington State in the mid-twentieth century.

The project will result in an exhibit of Landry’s art, and will initially be installed at the Na`m`sc`ac` Heritage Museum on the Shoalwater Bay Indian Reservation and travel to other locations throughout the state. 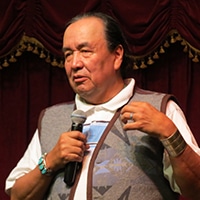 Randy Lewis, museum consultant and Colville Tribal Member, will conduct work that leads to the creation of a better understanding of the Native American heritage of the North Central Washington area. The project will specifically focus on the history, stories, and lifeways of the P’squosa/Wenatchi. Of particular interest is the area at the confluence of the Wenatchee and Columbia Rivers now occupied by the Horan Natural Area and Confluence State Park. The project will record Lewis’s extensive knowledge of the Horan Natural Area and conduct outreach with other P’squosa/Wenatchi, then disseminate the history and stories through public presentations, classroom visits, an edition of Confluence magazine, and a new curriculum for third grade students to engage with local Native American history and culture. 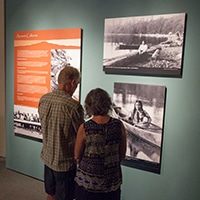 The Whatcom Museum’s Elder Oral Histories project is the second phase of the People of the Sea and Cedar: A Journey Through the Tribal Cultures and History of the Northwest Coast exhibit. A semi-permanent exhibit, People of the Sea and Cedar originally opened to the public in 2017. The exhibit shares the history and art of the Northwest Coast Native people, blending both historical and contemporary perspectives, and features historic photos, artifacts, hands-on learning experiences, and a language interactive. The goal of phase two is to provide elders from the Lummi Nation and the Nooksack Indian Tribe, two of the most prominent tribes in Whatcom County, with the opportunity to share their stories—including both good or bad experiences—through recording and preserving their oral histories. These histories will then be available for visitors to listen to as part of their experience in the exhibit. Many of the elders grew up in a time when their culture and language were being suppressed, and their lands, livelihoods, and properties were all but destroyed. Even today, many elders whisper when talking about the past. By sharing stories through these Native voices, visitors will gain a deeper understanding and awareness of the lasting legacy of the colonization of the area.

Home and Away: Canoe Stories of the Marshallese Community in Auburn 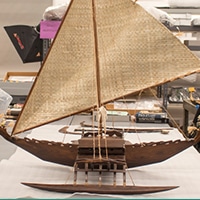 The 70 square miles of the Marshall Islands extend over 750,000 square miles of open ocean; the shared language and culture that exist across the region is a testament to the highly sophisticated canoe building and navigational skills that have connected these islands for centuries. In the 1940s and 1950s, US nuclear testing in the Marshall Islands resulted in large-scale migration, including to the Puget Sound area, disrupting the intergenerational transfer of this traditional cultural knowledge.

Today, the Marshallese community in Auburn is an underserved and often misunderstood population. Holly Barker, the Burke Museum’s Curator of Oceanic & Asian Culture, is partnering with the community to address this problem by building understanding and respect for the cultural gifts and strengths of the Marshallese people.

The project will support storytelling events in conjunction with a community-wide canoe building project, and will provide funding for Marshelle Island community leaders to work directly with Auburn residents. Partners include Canoes of the Marshall Islands, White River Valley Museum, the Auburn Library, and the City of Auburn.