Johnson’s commitment to the humanities in our state to be celebrated at Seattle Bedtime Stories Gala Oct. 4. 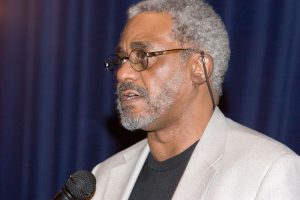 Charles Johnson, the recipient of the 2013 Humanities Washington Award and founder of Bedtime Stories literary gala.

Johnson will receive the award for his longtime support for the humanities in our state, including his involvement in Humanities Washington’s Bedtime Stories literary gala. At Bedtime Stories, writers from around the Northwest develop original short works inspired by an annual theme, then present them live at a dinner event. The event has sparked the creation of several books, including Jamie Ford’s latest, Songs of Willow Frost, and Johnson’s own Dr. King’s Refrigerator. Johnson helped found Bedtime Stories fifteen years ago and has since penned a story for the gala annually.

What: Bedtime Stories Seattle literary gala, featuring the presentation of the Humanities Washington Award to author Charles Johnson; this year’s event also features authors Erica Bauermeister, Rebecca Brown and Harold Taw, with emcees Gene Ambaum and Bill Barnes and honorary co-chairs Garth and Drella Stein.
When: Friday, Oct. 4, 2013, reception begins at 6 p.m., program begins at 7 p.m.
Where: The Spanish Ballroom at The Fairmont Olympic Hotel, 411 University St., Seattle [Details]
Tickets: A limited number of individual tickets will go on sale later this summer. Tickets, event sponsorship and information about purchasing a table are available from KayLee Jaech at (206) 682-1770 x103 or kaylee@humanities.org.
On the Web: humanities.org/programs/bedtime-stories/bedtime-stories-seattle-2013

“It’s very humbling,” Johnson said of this latest career honor. “I was just looking over the past recipients of (the Humanities Washington Award), and they’re very, very distinguished and diverse people … who’ve all made very selfless contributions to the humanities, to culture, to literacy.”

The Humanities Washington Award recognizes outstanding and exemplary achievement in the public humanities. Past winners have included Rep. Norm Dicks, the Northwest Museum of Arts and Culture and celebrity librarian Nancy Pearl.

Johnson received the National Book Award in 1990 for Middle Passage, making him the first African-American man to earn the award since Ralph Ellison in 1953. Johnson is the author of numerous works, including four novels, three collections of short stories and over 20 screenplays. Johnson is a professor emeritus at the University of Washington and an active force in the Seattle arts and humanities community.

“We are thrilled to honor Johnson’s contributions to the Washington state literary community – his prolific writing, meaningful mentorship, and, not the least of which, the fifteen years of original fiction he sparked by fathering Bedtime Stories,” said Julie Ziegler, Humanities Washington’s executive director.

The Humanities Washington Award was initiated in 1995 in memory of Heather C. Frank of Yakima. Frank was a dedicated and articulate supporter of the public humanities throughout her lifetime and gave generously of herself to a variety of cultural community activities.