Photo: Bridget Coila Back To All Blog Posts

Battleground in the Delivery Room

Making the rounds of Amish homes in central Pennsylvania, Natalie Jolly learned to see childbirth in a different way. In those cloistered communities that prize separation from mainstream influence, Jolly spent two years accompanying a midwife and assisting women giving birth to their children without ever leaving home.

“My reaction at my first Amish home birth was, ‘This needs to be in a hospital,'” she recalls. “‘I need those little sanitizing shoe covers, because I just walked through a barn to get here!’ … It was a long time before I was even able to say, maybe that’s not the single story here.”

The experience led Jolly to become a different kind of sociologist — one who specializes in studying the cultural contexts of birth. While pursuing her study, she’s written widely on birth and pregnancy for both academic journals and high-profile outlets like the Huffington Post.

For Humanities Washington’s Speakers Bureau series, Jolly — herself a mother of four — explores the American birthing complex in her talk “Should We Call the Midwife?: How Culture Shapes Childbirth.” Now an assistant professor at the University of Washington Tacoma, she explores how what appear to be “choices” for childbearing women — vaginal delivery or C-section? epidural or “natural” pain relief? — are actually constrained by preferences, prejudices and the medical industry’s bottom line.

“I think there’s more recognition of women’s roles when we open up those choices,” she says. “There’s different theories and different approaches, and I think women are asked to concede so much in the hospital, in terms of decision-making and valuing other folks’ opinions over their own.”

“You see a transfer of authority, even bodily autonomy — and idea that this is not something women can do, they need to have it done for them.”

Humanities Washington: Why does home birthing persist among the Amish?

Natalie Jolly: I think their ability to preserve this approach has been this lack of media connection and exposure. I think we’re seeing a more singular mainstream approach to birth — and we’re starting to realize that maybe we’re intervening in too many ways, and causing complications that don’t need to exist. The cesarean rate is now one in three — it’s the most common surgery done in the U.S., so a lot of national agencies and even the World Health Organization have gotten involved to say hey, we need to lower this rate. We’re getting a lot of bad outcomes healthwise, but also spending a lot of health resources we don’t need to.

Humanities Washington: Historically, when did the medicalization of childbirth start?

Natalie Jolly: I’d say it started in the turn of the century, with the field of obstetrics gaining popularity and trying to grow as a business. You really saw the medical community try to figure out how to bring birth to the hospital, because it was conventionally something that happened at home, with midwives. There’s a really interesting history about the demonization of midwives as backwards and dirty. It became a class marker, where if you had enough money, you could have your baby with prestige by going to the hospital. It moves from a natural process to a medical emergency that needs to be handled by trained professionals in a medical environment. You saw a real shift in how we think about birth. Some of the early doctors, even the language they used was fascinating, about the damage that babies do. You see a transfer of authority, even bodily autonomy — and idea that this is not something women can do, they need to have it done for them.

Humanities Washington: Post-natal care and recovery seems to be kind of a battleground right now. 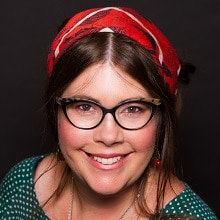 Natalie Jolly: Absolutely. I just have spent the last year with mothers in the military, and they talk about the social pressures on them to stop breastfeeding. They feel like there’s external judgment that they’re not committed to their job or to being good soldiers, because they’re taking fifteen minutes twice a day to try and pump milk. There’s a lot of places where women have internalized these external expectations — “What am I willing to give up?” That issue is much larger than childbirth. The way women are socialized in our society may be influencing the choices we make in childbirth.

Humanities Washington: Without advocating one path or another, how do you advise women to choose their approach to birth?

Natalie Jolly: I don’t know if I would necessarily make personal recommendations, but I would at least say that you need to think about the place where you’re going to be most comfortable. For some of us, that is a hospital environment, and we can just understand that’s going to be the right choice for us. More than that, I’m interested to think about what’s going on in society. I want women to have as many options as possible — but I want to understand why someone might make a decision that puts them in a high-risk position. Why would I agree to a C-section if I’m a low-risk patient? Are there other cultural factors influencing that decision?

Humanities Washington: Are mothers now allowed to more fully own the childbirth experience than they were in past decades?

Natalie Jolly: I definitely think that more women are talking about having experiences that are contrary to the experience they wanted to have. They go in with a sense of what they want their births to be, and there’s been more conversation about, “I didn’t want to have surgical delivery, but then this happened, so I made all these concessions along the way.” There’s maybe a growing frustration with the concessions women are asked to make.

As a member of Humanities Washington’s Speakers Bureau, Natalie Jolly is traveling the state presenting her free public talk, “Should We Call the Midwife? How Culture Shapes Childbirth” at venues around the state. Find an event near you.