Sita looking away as Ravana slaughters Jatayu the vulture. By Ravi Vari. Credit: Wellcome Library, London. Back To All Blog Posts

Rituja Indapure overcame the shame she felt from a long-hidden trauma in a novel way: by revealing it onstage in front of hundreds of strangers.

Rituja Indapure found her voice when she saw other South Asian women find theirs.

It was a 2009 production of Yoni Ki Baat, a culturally-specific variation on Eve Ensler’s The Vagina Monologues, staged by the Seattle arts and film nonprofit Tasveer. Participants in Yoni Ki Baat tell women’s stories of “things you want to sweep under the rug and not talk about,” as Indapure puts it. “Pain or pleasure or violence.”

A mere spectator at first, Indapure, an analyst at Costco and a community volunteer, became a Yoni Ki Baat performer the following year. The experience of talking about her own sexual trauma, and helping other women unearth and explore their own, led to her Speakers Bureau presentation The Healing Tale: How Stories Can Move Us Beyond Shame. She intertwines personal stories and elements of South Asian culture and mythology in her talk. And when the #MeToo movement arrived recently — with women creating change by sharing personal accounts of sexual victimization — Indapure was ready for it.

“One of my biggest fears, when I shared my story initially with a small group of women, was that they would ostracize me, they weren’t going to talk to me, they were going to shun my family,” she says. “But almost every woman in that circle had a story of her own experience —or was telling it to me in the third person — about being on the wrong end of an unwanted touch.”

The search for human stories has led Indapure to launch tale-telling projects, including her podcast, Roti Kapda aur Makaan (“Food, Clothing and Shelter” in Hindi). She’s also at work on a documentary about colorism in South Asian gender politics. As for the stage show that inspired her zeal for personal stories, Yoni Ki Baat has been held every year since its inception, including this past March.

“We just don’t have the platform or the tools where we can share these stories, where we can talk about our pain or the shame we’ve experienced in life,” she says. “The more we talk about it, the more I think we invite others to share their stories with us. I think the trust has to be gathered, but it has started so many amazing conversations.”

Rituja Indapure: In this talk I do it both ways. First, I relate stories that have been passed on through the generations. I start off talking about the fictional stories that I heard my grandmother tell me when I was younger, because I think that is another way of passing history and passing down stories of your family. Then I become more personal and share my own stories, and why I was compelled to tell my story. I use fiction, but it’s not really fiction. It’s mythology that I use, and then try to delve into our personal lives.

“Even now, so many of us are unsure what the repercussions will be for sharing our stories.”

Can you give us an example of the kind of mythological story you heard as a child?

My talk is also focused on how women are perceived in the community, and I bring a personal experience to that as a South Asian woman whose society is mainly patriarchal. The story I share is from the Ramayana, one of the epics, and how Rama reacts when Sita is abducted by Ravana — and how she has to sort of prove that she is still pure and untouched, and has to prove her devotion to her husband. I bring that up because growing up, we always heard these kind of stories, and they’ve become part of our fabric. My grandmother never actually told me that story, but she would tell me stories about Krishna and his gopis. But the Ramayana story sticks out in my memory: It seems unfair the queen had to prove that she was the one who was pure, was not defiled, and was still loyal, in spite of something that was beyond her control. I think that [attitude is] universal. Many times it’s the women who are castigated. “Oh, you’re not wearing the right clothes, or you’re drunk.” I think when society treats you that way, it’s hard for a woman not to think of herself that way. I think that’s what we need to question: Is this really how it should be? When we started talking about the #MeToo movement, there were men in my life who told me they absolutely knew this was happening, and then other men who say, “What? We didn’t know anything about that.” If you shut yourself off from these experiences, how will you know?

For abuse survivors, it seems there has to be a personal disclosure on their part before there can be accountability for their victimizers.

That’s the hardest part, because even now, so many of us are unsure what the repercussions will be for sharing our stories. These issues were raised by many, many women for a number of years, but there’s always a fear of a backlash — what if I lose my job, what if I can’t afford to come forward? That is what keeps many women quiet. For many women now coming forward, I don’t think they have any support network. 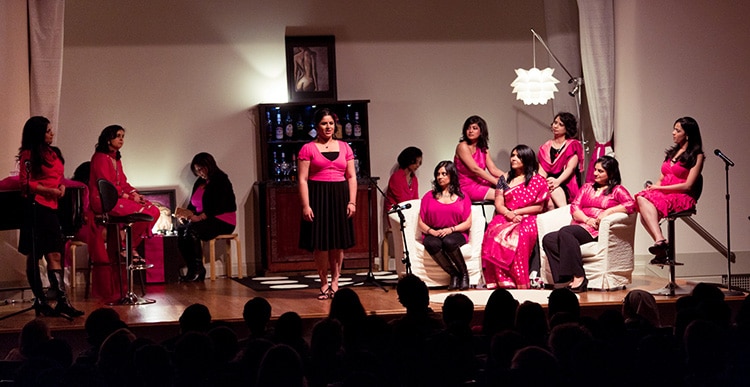 When did you do your own reading in Yoni Ki Baat?

I performed for the first time in 2010. After watching the show in 2009, I had a very powerful reaction, but at that time, I was not a stage person — I didn’t want to be in front of all these people and just blurt out these stories. But I thought it was important that I share my story, because I had not been able to until that point. I originally said, “I’m going write this thing down and you guys find somebody else to read this story” — but the producers ended up convincing me that I would be my own strong voice. In 2012, I produced the show. I continue to be involved, and find new people to join the program. Not only has it empowered me, but it has empowered people around me to talk about sexuality, to talk about sexual violence, to talk about anything. Imagine something so shameful that you hide it from your loved ones — yet once you share it, you’re accepted by your loved ones. That is a very powerful emotion. I think that leads to many other channels, especially your creative channels opening up, and allowing you to push away those gray clouds that have been around you for part of your life. Once you’ve talked about the core of your being, and people say you’re fine even with those flaws, the world is different.

For healing, is a fictional story as valid as a personal disclosure?

One of the things I liked about Yoni Ki Baat is when the women came onstage, they presented the stories as their own. I feel like once you take ownership of the story — be it in the first person, be it your own experience — being authentic through the story is very important. I know there’ve been years when we received a story from somebody, and maybe that person wasn’t in the right place to share their story personally. Those have been very powerful as well. But I think when you share your story as yourself, the healing you experience is more powerful than telling it in the third person. I think the impact to the audience might be the same, but what it can do for you is very impactful when you do it as your own self. That is probably the hardest thing to do.

Indapure is presenting a free talk, “The Healing Tale: How Stories Can Move Us Move beyond Shame,” around the state as part of Humanities Washington’s Speakers Bureau. Find an event near you.