Spokane-based author Sharma Shields reflects on magic, myths and the inspiration of Pacific Northwest landscape for her writing. 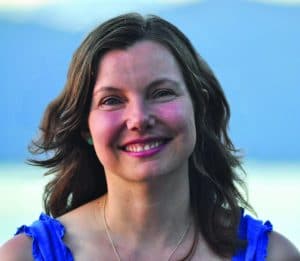 The audience at last year’s Bedtime Stories Spokane might have had some difficulty drifting off to sleep after the event. Sharma Shields, whose stories include werewolves, Cyclops, and even more horrifying incarnations of the human species, blew audiences away with the story she wrote for the event, “Identity Theft.” Novelist and perennial Bedtime Stories favorite Jess Walter described Shields’s writing as “funny, disturbing and surprisingly profound.”

With her 2012 debut story collection Favorite Monster garnering praise for combining dread, insight, and magic in equal parts, Shields looks forward to when her first novel, The Sasquatch Hunter’s Almanac will be published in 2015.

“I’m really trying hard to make a living as a writer,” said Shields, who lives in Spokane with her husband and two children. “It’s finally starting to pay off, and I love what I do.”

This year, Shields is thrilled to return to Bedtime Stories in Spokane on October 17 along with her retinue of mythical beings. Shields will join fellow writers Elizabeth Austen, Jamie Ford, and Tod Marshall to present a new story written around the event theme, Bump in the Night.

Humanities Washington recently spoke with Shields about variety shows, Target, and the mythical power of the West.

Humanities Washington (HW): From Bedtime Stories to Spokane-based magazine RiverLit’s literary variety show, you’ve participated in several collaborative-writing events that connect writers, their work, and the communities where they live. What draws you to collaborative events like these? What do they offer that writing alone doesn’t?

Sharma Shields: I used to get really nervous at the start of my career about reading work, but now I find it thrilling. It’s a really immediate way to get a response. You don’t usually get that in writing…you write it alone, and you generally read it alone. I love that opportunity for an immediate response to my work.

The variety shows are especially fun because I’m a huge music lover, and the readings are broken up with musical performances. Right now, I’m organizing an event featuring female authors and local bands at the Bing Crosby Theater [in Spokane]. It’s called Lilac City Fairy Tales, and it should be dark, magical, and creepy.

HW: Your upcoming novel is titled The Sasquatch Hunter’s Almanac. What was your first encounter with the Northwest’s favorite boogeyman?

Shields: I don’t remember being aware of it, growing up. There was Bigfoot in the background, but I was always interested in Greek and Russian folklore and mythology, as well as stories like Grimm’s Fairytales. I didn’t get into the Sasquatch thing until I wanted to write a story with a more regional nature. The Sasquatch Hunter’s Almanac is actually an expansion of a story from Favorite Monster, featuring a creepy zoologist, but his character changes a lot from the story to the book.

HW: Your stories tend be taut and short, centering on a handful of heated moments that put the characters under enormous strain. As you wrote and revised your upcoming novel, did your writing strategy change? What was it like to live with characters for much longer stretches of time?

Shields: My big struggle with the novel was making sure I kept that tension in it. This novel that’s getting published is actually the third novel I’ve written. When I set out to write this novel, I chose to address every chapter as I address a short story — with something very clear that the character wants. Whether they get what they want is what gives the chapter its arc. The biggest issue was that it read more like a short-story collection, and I had to edit it to make it cohesive.

In terms of the creepy zoologist, I discovered who the character was more and more as I wrote. He becomes a much better person as his whole life is viewed. I think most people can be terrible in a single moment, but they’re rarely all bad. You discover more as you go.

HW: You sat on a panel at the Association of Writers & Writing Programs Conference called “The Uncanny West, or How to Conjure the Real West through the Fantastic.” What about the West, and particularly the Northwest, do you find conducive to your fantastic stories?

Shields: What’s cool about the West is that there’s a very thin line between the indoors and the outdoors. I love marrying the realities of the landscape of the West with flights of fancy and fiction. Growing up in Spokane, we had quite a bit of property, and that encompassed sparse forest as well as pasture land. My going out playing and exploring there helped develop my narrative imagination.

The combination of having freedom to explore and being an avid reader was also fantastic in this regard. I read Stephen King’s books in elementary school, which maybe wasn’t such a good idea [laughs]. Greek mythology was important as well, with its unhappy endings. I loved going out to the forest and replaying those stories. Of course, there’s now a Target on the lot where I grew up.

HW: As you get ready for the publication of The Sasquatch Hunter’s Almanac, are there any writing forms or projects that you’re eager to tackle? What do you see as your next steps?

Shields: I’m just about finished with my next short-story collection, and I’ve started a new novel called The Beautiful Game, based on soccer and the Whitman Mission. I just wrote a scene that discusses a character’s great, great uncle while he was in the Walla Walla penitentiary. It’s based on a true story about a criminal who escaped in a box that was supposed to be full of library books. His escape was made possible by his roommate, who sewed a full-sized body dummy of the uncle. It was so convincing the guards didn’t realize he was gone until the next day or so.

Even though my stories are completely fantastical, I love doing research that keeps them rooted in some kind of history or reality. There are so many bizarre things that you can’t begin to think of, but they’re so fun to include in the work.