The recent event on Bainbridge Island invited local filmmakers to speak on the challenges and rewards of filming in remote locations. The filmmakers forum was supported by a Humanities Washington grant.

Watch Full Episode on PBS. See more from Cave People of the Himalaya.

What does it take to film a movie in Nepal? Or Tanzania? What would you need to bring? What might get you removed from the country? And how could you gain the trust of the people you want to film?

Laurance Price on location in Tanzania.

More than 50 people attended the event, which featured Bainbridge filmmakers Liesl Clark, Bryan Gunnar Cole and Laurance Price sharing their experiences about filming in Tibet and Nepal, Papua New Guinea and Tanzania, respectively. The forum explored how filmmaking in other countries can forge cross-cultural understandings.

“Gaining the trust of the people [being filmed], especially if they are from other cultures, can take a lot of time … . The filmmakers have to be very sensitive to and respectful of cultural and societal mores as well as privacy issues,” said Kathleen Thorne, coordinator of the Celluloid Bainbridge Film Festival. “Then there are the logistics: getting visas, local crew, translators, guides, people to haul your gear over rough terrain.”

The filmmakers also shared several fascinating stories of mishaps, ranging from mountain climbing accidents to equipment failures to being run out of filming locations by government authorities.

“What drew the most questions and discussion was how the filmmakers tried to ‘give back’ to the indigenous communities they were filming,” said Thorne. “In many cases, [the filmmakers] were welcomed into people’s homes, provided with food, guides, etc., and really weren’t able to pay them for those services, although they did try to reimburse them for food and other out of pocket expenses. But the villagers did not want to be paid for what they considered traditional hospitality. And although the filmmakers could offer DVDs of the final films, in many cases the villagers had no way to watch the films.” 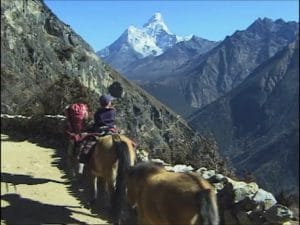 A still from Liesl Clark’s Adventures of Blue Bear

The filmmakers found unique ways to give back to the communities. One photographer took a portable photo printer with him to give rare portraits to the villagers he met. Clark founded children’s libraries in the Nepalese villages she filmed in.

But the panelists agreed, “Ultimately, the ‘give back’ is by telling the stories of these people and cultures to the rest of the world authentically and respectfully,” said Thorne.

Thorne is grateful to Clark, Cole and Price for returning to Bainbridge to share their experiences with budding filmmakers. “It’s wonderful to be able to pay them an honorarium, thanks to Humanities Washington!” she added.

The forum is a major way the Celluloid Bainbridge Film Festival helps build the Bainbridge filmmaking community. The festival has shown over 325 films in its 14 year run, including Trouble in Mind; What’s Up, Tiger Lily?; Smoke Signals; and It Came from Outer Space. Films must meet only one qualification: They must have been filmed on the island or have a Bainbridge Islander on the cast or crew. 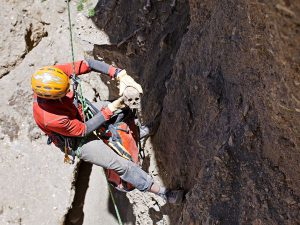 A still from Clark’s Cave People of the Himalaya

The festival helps keep the filmmaking community on Bainbridge vibrant.

“Bainbridge Island is home to a surprising number of filmmakers ranging from young people who are attending or have recently graduated from film schools to a group of established independent filmmakers and a few well-known ‘Hollywood’ types who have retired to the island,” said Thorne. “Plus, as changes in camera and editing equipment have made filmmaking accessible to just about anyone, a lot of people of all ages who just like to shoot movies for fun.”