Congressman’s career-spanning support of the humanities and arts to be celebrated at award reception in Olympia Sept. 25. 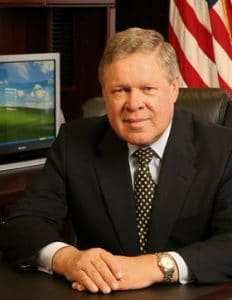 Dicks also served 36 years as a member of the Interior and Environment Appropriations Subcommittee, through which he delivered crucial support to the communities of Washington state. Through his service, he helped achieve parity between funding for the National Endowment for the Humanities and the National Endowment for the Arts. In March 2012, Dicks announced that he would be retiring from Congress at the conclusion of the current session, ending his tenure as the longest-serving member of the U.S. House in our state’s history.

What: Humanities Washington Award reception honoring Rep. Norm Dicks
When: 4 p.m. Tuesday, Sept. 25, 2012, program begins at 5:15 p.m.
Where: Triple Creek Farm, 5041 Houston Road, Olympia, WA 98502 [Directions]
Cost: Free, but please email an RSVP to info@humanities.org with “Norm Dicks Reception” in the subject line and the names of the people in your party within the body of the email.
On the Web: humanities.org/programs/special-initiatives-and-events/humanities-wa-award

Dicks will leave behind a rich legacy of cultural and environmental support. “By funding the humanities and the arts, supporting policies that enable preservation of historic places, parks, wildlife refuges and trails, and advocating for our region’s many Native American tribes,” explained Humanities Washington Executive Director Julie Ziegler. “Norm has ensured that Washington communities in and beyond his 6th district will continue to thrive.”

The Humanities Washington Award is an annual award recognizing outstanding achievement in the public humanities in Washington state. This award is presented annually to an individual or organization whose time and talents enlarge the meaning of the humanities in our lives and whose work reflects the spirit and programs of Humanities Washington. The award is given each year in memory of Heather C. Frank of Yakima, a tireless support of the public humanities during her lifetime.

Thank you to our generous hosts: Ralph Munro, Bill Taylor, Karen Munro and the Trustees of Humanities Washington