Evergreen Prof. Ratna Roy talks about dance, Eastern Mysticism, and quantum physics – and how they are all intertwined.

Ratna Roy, an academic and classical Indian dancer, connects philosophy and physics through the expressive, graceful movements of Odissi dancing. She performs this style of dance around the world as one of the privileged few that knows it. In fact, thanks to Roy, Washington state has become a hub of Odissi dancing in the women’s tradition, and she is invited to India nearly every year to perform.

Odissi, considered the oldest of the traditional dances in India, was nearly eradicated when India was under British rule and it became associated with prostitution. This classical Indian dance form, also known as Orissi, is distinguished from other Indian dances by the independent movements of the head, chest and pelvis. The poses are said to most closely resemble the poses of early sculptures in Indian temples.

At the Evergreen State College in Olympia, Roy has taught Odissi dance alongside physicist Don Middendorf and Consciousness Studies professor Sarah Williams, as part of a 48-credit course called Dance of Consciousness. The course was designed to explore the interconnectedness of the universe and to bridge the gap between science and mysticism by studying dance, transpersonal psychology, ecofeminism, neurobiology, quantum physics and more. Some of the course textbooks include Gary Zukav’s The Dancing Wu-Li Masters and Fritjof Capra’s The Tao of Physics.  Through 2014, Roy will be teaching a course called Orissi Dance and the Music of India. 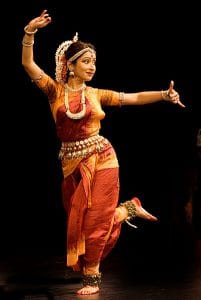 A dancer since age four, Roy continues to cultivate the tradition of Odissi in expressing philosophical concepts, and is passing it on to her students at Evergreen. “In India, dance IS an expression of philosophy.  Dance IS the language of philosophy,” says Roy.

She is also now exploring how the language of dance can be used to explain modern day topics like nuclear physics, U.S. History and environmental issues. One of the ways she does that is as a member of Humanities Washington’s Speakers Bureau, traveling the state with her presentation, Dance of the Atoms: Modern Physics Meets Eastern Mysticism.

Humanities Washington had a chance to talk via email with Roy about multi-dimensional reality and how we can merge science and spirituality to better understand our world.

Humanities Washington: In simple terms, what is quantum theory?

Ratna Roy:  In a brief synoptic capsule, the history of quantum mechanics begins with Max Planck in 1900. According to Gary Zukav, in The Dancing Wu-Li Masters, Planck was “searching for an explanation of why things behave as they do when they get hot.”  Planck discovered in the process that excited atomic oscillators do not emit or absorb energy smoothly, but by spurts. He coined the name “Quanta” for the energy packets.

HW: How does Eastern mysticism – in Hinduism, Buddhism or Taoism – explain the inter-relationship of all phenomena in the universe?

Roy: This idea of interconnectedness includes the role of the human observer who is now a participator. Whereas in science, the participator still has a distinct identity, in Eastern mysticism, the distinction breaks down completely – subject and object fuse into one.

In the words of Chuang-Tzu, “my connection with the body and its parts is dissolved. My perceptive organs are discarded. Thus leaving my material form and bidding farewell to my knowledge, I become one with the Great Pervader. This I call sitting and forgetting all things.”

Sri Aurobindo in The Synthesis of Yoga says almost the same thing: “The material object becomes … an indivisible part and even in a subtle way an expression of the unity of all that we see.”

HW: What do you mean when you talk about a multi-dimensional reality?

Roy: Reality is not linear. It is multi-layered, sometimes contradictory, as subatomic physics found out. This multi-dimensional reality was expressed through riddles, poetry, and ultimately, music and dance in the Eastern hemisphere.

As mathematics is the language of physics, movement is the language of philosophy. It is very difficult to express through verbal or descriptive language the principles of nuclear physics. Therefore, the language of math has played a significant role in the expression of physics. A similar situation exists in the realm of philosophy. The movement patterns of martial arts, archery or dance are the expressions of a philosophy or philosophies that are unintelligible, un-understandable and inexplicable (i.e. multi-dimensional) through ordinary language. All a language can do is talk about an experience. A description of an experience is not the experience.

HW: Why do you think most people (in the Western world) feel that science excludes spirituality, and vice versa?

Roy: I am not sure whether I have the right answer, or whether there is a right answer. I grew up in a culture and a family where the two were not mutually exclusive. However, during the period of Enlightenment in Europe, science got separated from philosophy, and a distinction was also drawn between the male and the female ways of knowing, intellect versus emotion. So, I feel in the West people have the conception that science and spirituality are mutually exclusive. But from what I have read, many of the physicists were mystics, spiritual. However, does that mean they equate the two? No, they don’t always.

HW: How can people learn to merge both science and spirituality to better understand our universe?

Roy: My talk, Dance of the Atoms, will ultimately lead to questioning the audience on how both ideas can coexist and help us to be a complete whole person — the rational and the spiritual; integrating the body and the mind — whether we believe that Eastern mysticism (or for that matter any mysticism) is convergent with or parallel to Western science or not.