Defeating Racism Today: What Does It Take?

Talking about racism with a room full of strangers is hard, yet that’s what Eva Abram does across the state. “The intent is to get people to consider a problem they sometimes perceive as being outside themselves.” 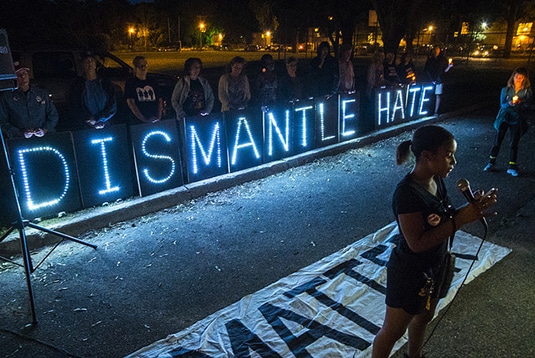 A vigil after the Charleston shootings in 2015. Photo: Light Brigading, via Flickr/Creative Commons.

Eva Abram wants her listeners’ conversation about racism to continue long after she’s left the room, and some communities are taking that to heart.

After the first time presenting her Humanities Washington Speakers Bureau talk “Defeating Racism Today: What Does It Take?,” the Rainier Valley Historical Society opted to carry on the program in its own series of public roundtables.

Abram would like to see the conversation take root everywhere in the state, and not just in racially-mixed locales. “I want to reach every corner of Washington,” she says. “I know there are communities where there are few ethnic minorities, but the point of the talk is that this is for everyone.”

Abram, an actor, storyteller and veteran Speakers Bureau contributor, has touched on the issue before. Her most recent traveling presentation explored the story of Charles Mitchell, a young black man whose sojourn by boat from Washington to Victoria, B.C. in 1860 became the flashpoint of a legal battle over slavery. Her current talk features similar human stories, but the scope is broader, and the conversation is different each time.

“I’d like people to know that this is an open discussion,” Abram says. “They don’t need to be afraid of sounding racist or being called racist. They don’t have to be concerned with any of that. We’re all there together to learn and support each other.”

Humanities Washington: This is a big topic. How do you tackle it in your talk?

Eva Abram: My approach is to get people talking about different issues — and my particular approach to this subject, racism, is to give people background on how the pattern of racism developed in our country, and how the pattern still exists throughout different aspects of our lives. I introduce racism and talk about the difference between what prejudice is and what actual racism is, so that we’re on the same page in terms of definitions. Then we move on to discussion and ask people to respectfully discuss their opinions and their experiences. The discussions are very active. People are very eager to share their thoughts and experiences, and their hopes for the future. The intent is certainly not to solve the problem — that would take years and years and years, as it took years and years and years to build up and maintain this unjust system. But the intent is to get people to consider a problem they sometimes can perceive as being outside themselves. It’s not something each individual is dealing with on a daily basis, but I try to present the information in a way that ties it more immediately to them.

If “prejudice” and “racism” are different aspects of the same problem, how are they defined?

Prejudice is the immediate opinion of someone based on how they appear to be, or what their immediate socioeconomic status appears to be. But racism, beyond that, is having the power to affect that person’s life — to determine whether that person will get a job, receive services, be promoted, and so on. And then there are racially-infused acts. Even if you don’t have the power to put someone out of a job, you have power on a lesser basis — doing something to a person because of their race or gender preference. For example, police departments all over our nation are in the news of late, [and the focus is] on the internal structure of the departments, and how the pattern of attitudes and the acts supporting those attitudes continues. We have to change the way that police departments operate, along with other organizations. We have to ask Rahm Emanuel in Chicago about the length of time it took for a certain video to be released. He has apologized for taking that long to release it, and I don’t know what his considerations were, but on its face, the fact it took over a year for that video to be released makes me question what was happening over that period of time. His actions tend to support perpetuation of a system that has been unjust.

Do you find audiences willing to engage in discussions about racism, or do they have to be coaxed?

Sometimes before I even get to the part where we have open discussions, they’re eager to have something to say, and I really appreciate that. I tell them in the beginning of my presentation that we are going to get past that uncomfortable thing that happens when racism is mentioned, because we all know that it is an uncomfortable issue. People are very, very willing to share their thoughts and feelings, and it’s usually hard to close the discussion down. I really don’t think I’ve had a discussion yet where I’ve had the time to conclude the way I would like to, and just kind of tie everything together — because we run out of time, and these talks last about an hour and a half. The goal is to take it out of the room. Take it to your communities, take it to your organizations, your book club, your office, and drive the discussion from there. People are all over the board about their experiences. They talk about recognizing internal bias, and that is really a good place to start. There’s a Harvard University test online that people can take to find out their internal bias. I ask people to not be afraid or surprised if they find they have internal biases. I think we all do. We have been living in a culture that has been feeding those, consciously or unconsciously for a long time.

Do you think social media movements like #BlackLivesMatter, rooted in the police-involved deaths of people like Michael Brown and Freddie Gray, are helping present the experience of racism more forcefully to a white audience? 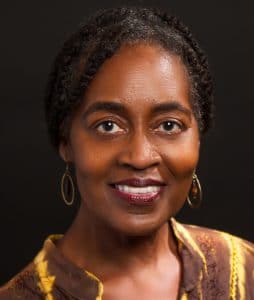 I do think that is helping people become more aware, because individually, you may or may not have had certain experiences. One [white] woman talked about having moved to a certain neighborhood, and she was warned there was a black family in the neighborhood. She also talked about having made friends with a black woman and trying to help her find a place to live. She checked out a place for rent in her area, and the rental person was very positive with the Caucasian woman — but when the lady brought her friend, who was black, it was a very different response. The lady was very surprised at this, but that went toward her learning about the black experience in America. The cases you mention, that is helping a lot of people become aware without having a one-on-one experience, much like the news from Birmingham, Alabama, when people first saw dogs attacking demonstrators and water cannons being fired. That expanded awareness, just as we are seeing today.

You’re an actor. What degree of this talk is performative, and what degree simply direct and facilitative?

I’m an actor and storyteller. [The storyteller role] plays a part as well, and the two are very closely related. As an actor, I actually open my talk with a monologue from Lorraine Hansberry, from her play Les Blancs — just to tell people where I’m going. As a storyteller, there are stories throughout my presentation. There’s a story of a black man during World War II, in eastern Washington. So storytelling plays a part. But acting plays a relatively small part, because then the open discussions happen. There’s truth in acting and storytelling, but there’s also truth in honest exchange.

Abram is presenting her talk at venues around Washington State. To see if she’s coming to your area, view our calendar.