The author of The School of Essential Ingredients and The Lost Art of Mixing talks her returning characters, showing multiple perspectives, success at 50 and more. Bauermeister will read at Bedtime Stories Seattle Oct. 4.

Erica Bauermeister became an overnight success after decades of hard work. The Seattle author sprung into the wider consciousness in 2009 with her bestselling novel The School of Essential Ingredients. What the readers who devoured that book of interconnected character studies didn’t know was that Bauermeister had spent some thirty years rehearsing for the big day. “I wrote all of those years,” she says now, with her third novel new on bookstands and a fourth on the horizon. “It just wasn’t published. Malcolm Gladwell will tell you you need that 10,000 hours, a huge amount of time, to become good at what you want to do — and I clocked them.”

Bauermeister’s novels all share an interest in people moving out of isolation and discovering themselves through fellowship. The School of Essential Ingredients was set in a cooking school, where students with disparate stories of loss and solitude come together over the rituals of the kitchen. Her third, The Lost Art of Mixing, published in January, returned to the same setting, with a blend of new and established characters. In between came Joy For Beginners, in 2011, in which a sisterhood of fractured friends pledge to do something new and daring with their lives in the face of sudden mortality. Bauermeister had hoped to write a memoir about the years-long struggle she and her husband fought to renovate their antique house in Port Townsend, but it turned out the market was flooded; now she’s at work on her next work of fiction. She’ll read Oct. 4 at Humanities Washington’s Bedtime Stories event in Seattle, debuting a work that’s a rarity for her: a short story. Despite the frequent use of vignette in her novels, standalone short fiction has never been a serious pursuit for her. “It’s unlike anything else I’ve written,” she says. “I read it to my writing group and they all looked at me like, ‘Wow, we didn’t know you had that in you.'” 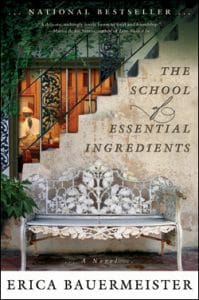 Bauermeister’s The School of Essential Ingredients

Humanities Washington: What’s the biggest advantage of writing a novel with a point of view that swings through an ensemble of characters?

Erica Bauermeister: I write in limited third person for each of the chapters, and what I love is the way readers then get to pretty intimately know each character — but they also get to stand above the page and see how these characters are influencing each other in ways they’re not even aware of. It’s actually happening off the page. In the case of Carl and Helen, in The School of Essential Ingredients, you see Carl’s side of the story, and then many chapters later, you get Helen’s side — and there are things about Helen that Carl doesn’t know, and will never know. The reader knows, and they see how that colors Helen’s reactions to Carl throughout the book. One of the points I was trying to get across is even the people we know most intimately, we don’t know everything about them.

HW: Are the recipes in your books your own? Did you have any trepidation about giving them away in print? 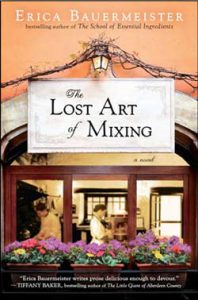 Bauermeister: Some of them are my own, some of them are ripped-off recipes that other people have used. Ian’s tiramisu stared with the Mario Batali recipe, and then we did all kind of fun tasting parties where we swapped out kinds of alcohol to see which one worked best. I don’t believe in holding too tightly to a recipe, but as a general rule, I see recipes as sort of basic guideposts, and with any luck you will start exploring and just use them to feel safe.

HW: You’ve developed a talk around being a writer who achieved your publishing goals at 50 rather than younger. How did having that maturity help you?

Bauermeister: You get all that accumulated life experience — that’s part of it. You’re certainly more humble at 50 than I think I would’ve been at 22. I had been through motherhood at that point, to a certain extent, and I was able to look back and have a perspective on how I was as a parent, but also see that it had turned out okay anyway. I think I’m more generous and more empathetic, and that affects how I approach my characters.

HW: The Lost Art of Mixing is a sequel. Are there particular challenges to creating a second novel after what seemed like a standalone book?

HW: Do you have particular writing exercises that you undertake or recommend for students?

Bauermeister: Reading. The first book I ever did was a nonfiction book called 500 Great Books By Women, and that involved reading thousands of books, good and bad. I learned as much, if not more, from the books that didn’t work, because it really taught me to analyze writing as a writer. My books come out of characters, but they also come out of an interest in learning about something.