“The folk and traditional arts may be rooted in the past,” says exhibit documentarian Alan Govenar, “but they are critical to our understanding of the contemporary world.” 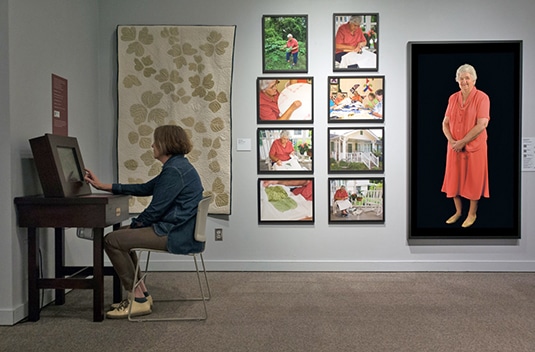 “I wish I would’ve started as a kid,” says Saari. “It has taken me so many places.”

“It” is the kantele, the stringed harp of his Finnish forebears, and Saari is one of the instrument’s foremost American practitioners. The largely self-taught musician labored for 23 years to learn and promote the instrument before his work won acknowledgement in 2005 from Washington Governor Christine Gregoire, who presented him with the Governor’s Heritage Award.

The following year came a nationwide coup: A Heritage Fellowship from the National Endowment for the Arts—the highest U.S. honor for a traditional or folk artist.

“I heard afterwards about the people that were putting my name in for that national award — they didn’t think there was any chance to get the national one, so they decided to try also for the state award,” Saari says today from his home in Naselle. “Well, the state award came, and the next year, the national.”

Saari chuckles. “I’ve never had that kind of award before. Jokingly, I told my wife I need to get a bigger hat in case my head swells.”

Hatless, Saari is one of the pillars of a touring exhibit and public programs that has arrived in the state with assistance in part from Humanities Washington. Presented by Northwest Heritage Resources, Extraordinary Ordinary People: American Masters of Traditional Arts collects recipients of the NEA’s Heritage Fellowship and puts them under one roof, moving from venue to venue across the country with accompanying public programs. First featured at the Michigan State University Museum, the exhibit boasts large, eye-catching portraits of many honorees by photographer-documentarian Alan Govenar, plus interactive sound and video featurettes.

For instance, pause by Govenar’s huge photographs of Guinean-American Sidiki Conde, a drummer who has been unable to use his legs since contracting polio in his youth, and you can unspool a portion of You Don’t Need Feet To Dance. The video documentary by Govenar chronicles Conde’s life as a musician, teacher, and recumbent bicyclist in the Big Apple. Use your phone to scan a QR code next to the portrait of Del McCoury, and listen to the bluegrass master’s guitar. Nearby in another documentary outtake, Konstantinos Pilarinos demonstrates the sacred Byzantine woodcarving he learned as an orphaned apprentice in his native Greece.

“We should celebrate the work of these artists,” Govenar says, “because they are not only masters of traditional arts, but because they are innovators and educators who represent the core fabric of American life.”

The exhibit shares a name with a young-readers book Govenar authored in 2006, which profiled five National Heritage fellows. Govenar, a folkorist and scholar based in Austin, Texas, established the nonprofit Documentary Arts, which produced the exhibit and much of its filmed content. He began profiling the National Heritage Fellowship alumni in part because of his affiliation with Bess Lomax Hawes — a member of the famous Lomax family of folk preservationists — who established the program in 1982.

“Bess was a mentor of mine, and I deeply believed in her vision,” Govenar says, “and over the years I have documented the lives and careers of National Heritage Fellows in different media.”

While the exhibit tours Washington, landing next in Seattle’s Jack Straw Cultural Center from September 11 to November 30, Saari has a place of honor. So too do other Washingtonians recognized by the NEA program, including Violet “Vi” Hilbert, also called Taq Se Blu, a linguist and storyteller of the Upper Skagit Tribe who died in 2008; and Bruce “Subiyay” Miller, basketry artist and tradition keeper for the Skokamish Tribe until his death in 2005.

May 1 through Aug. 9:
Wenatchee Valley Museum and Cultural Center, Wenatchee

About Saari’s kantele: Its creation is attributed to Finland’s legendary hero Väinämöinen. It’s a wood-bodied instrument akin to the dulcimer, with its number of strings ranging from five to forty, depending on the player’s facility. An estimated 2,000 to 3,000 new kanteles are made and sold in Finland each year.

The music made on the apparatus — which can vary in size depending how many strings are involved — remained fairly dormant in the United States until the last few decades, when player/teachers like Saari came out of the woodshed to instruct young musicians on the form. Back in Finland, young upstarts aim to push the instrument forward, with new educational initiatives and new designs for the kantele.

Saari, a retired schoolteacher, came to the kantele later in life. His Finnish-born father played regularly, but for his American-born children, the kantele was “dad’s thing,” as Saari puts it. Only at age fifty, after his father passed on, did he decide to pick up the instrument. Now he teaches in schools, offers demonstrations, and plays full-out, often with his daughter Karen Nelson.

Saari performed in May at the Wenatchee Valley Museum and Cultural Center, when Extraordinary Ordinary People was on show at that facility. He’s also scheduled to play alongside fellow kantele artists when the exhibit berths at Jack Straw — and perhaps at FinnFest USA, a yearly national festival of Finnish culture, this year scheduled for Buffalo, New York in October.

“I’m hoping that people of all ages who view the exhibition will become more aware of the vitality of folk and traditional artists in their own families and communities,” Govenar says.