From Initial Prints to Digital Impact: The History of Comic Books

Speakers Bureau’s Andrew Wahl talks with Spark about the history and art of comic books, and reading between the panels.

Think of the 1930s in the United States, and certain trials are certain to spring to mind. The Great Depression and the Dust Bowl often encompass most people’s impressions. With all the hardship faced during that decade, it’s no wonder U.S. citizens were looking for a hero – and that some people started to pour out this instinct on paper.

The 1930s saw the creation of the very first comic books in America. Amidst true tragedy and turmoil, Superman first appeared in 1938, and Batman was born in 1939. These characters have come to mean much more to people than just sketches in the funny pages. Symbols of hope, virtue, and strength in the face of adversity, superheros – and even everyday characters in comic books – offer entertainment and inspiration to readers of all ages.

The first generation of comic books lasted from the 1930s to the mid-1940s. Dubbed the Golden Age of comics, in this period beloved archetypes were formed, and many of today’s household names, like Superman and Batman, became popular. From the 1950s through the ’60s, the Silver Age of comics highlighted more nuanced stories of personal angst, as Peter Parker (Spiderman) worried about getting a date. This era saw the rise of Marvel Comics and of more lighthearted, goofy stories, in part due to a ban on “horror” in comics. Between 1970 and 1985, the Bronze Age featured stories that tackled more socially relevant issues and darker plot elements, after the ban on horror was lifted and the Vietnam War prompted national self-reflection. 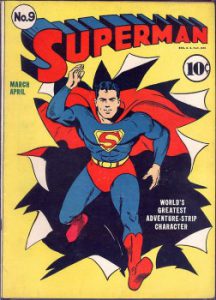 What do each of these periods say about our history, and how have the books themselves impacted our current culture? These are complicated questions, tackled by journalist and Speakers Bureau presenter Andrew Wahl.

Acknowledging his affinity from a young age for comic books and journalism, Wahl grew up pursuing both with equal ardor. He has worked as a journalist, editor, and editorial cartoonist at newspapers throughout the Pacific Northwest, and currently teaches journalism at Everett Community College. While earning his master’s from Fort Hays State University, he studied the Bronze Age of comics, a unique era in the industry spanning roughly from 1970 to 1985. Wahl is also the creator of the website Comics Bronze Age, an online magazine and resource devoted to his reviews of issues published during that era.

As part of Humanities Washington’s Speakers Bureau, he sparks conversation with audiences across the state with his presentation Sequential Reaction: A History of the American Comic. Wahl has an upcoming presentation in Moses Lake (April 17) and has other presentations slated all around the state (see You Can Go for more information).

Wahl recently spoke with Humanities Washington about his presentation.

Humanities Washington: While your presentation covers comics since their introduction to the public market in the 1930s, your website focuses on comics written between 1970 and 1985. Why is it called the “Bronze Age” of comics, and why did it especially stand out to you? 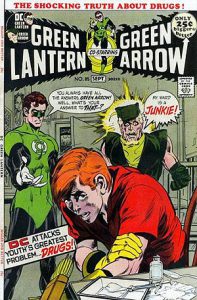 Wahl: First, you started to see things like social relevance and major current events coming into the story lines. It’s really when comic books started to grow up. I was a child and then a teenager throughout the Bronze Age, so comic books and I grew up together – we aged at about the same pace in that period.

The second element is, that’s when you had the first generation of comic book fans becoming comic book creators. Before that, during the Golden Age and the Silver Age, most writers and artists would have primarily been working on cartoon strips. But with the Bronze Age, you saw comic book fans becoming professionals in the field. They grew up with the earlier comics, and so they have a very different input because of that — there was a much more reverent tone to the material.

HW: In your opinion, what is unique about comic books? How does having both art and text affect how the stories are told, in comparison to other formats, such as music, theater, text-only novels, etc?

What: Sequential Reaction: The History of the American Comic Book, with Speakers Bureau’s Andrew Wahl

Wahl: The storytelling power that captivated me as a kid, and continues to captivate me today, has a lot to do with what goes on between the panels. Unlike movies, you have the ability to see into characters’ minds and read what they’re thinking. Unlike books, you have some of the visuals already there for you to play off of. But the real magic, the real power in the story, comes from what you do between the panels. That’s where the skilled artist or writer has control over time and pacing.

You will also see, in some of the more high-end examples and from true masters of the craft, that the text can tell one story, the art can tell a second story, and the combination – the juxtaposition of those two tales – tells another story altogether. That layering is a power very unique to the comic book page.

HW: What interested you about the history and culture of comic books? 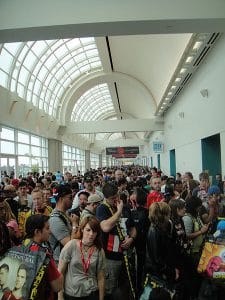 Attendees line up at the San Diego Comic-Con in 2011. “Comic books used to be very much for kids, and now the average … comic book reader is in their twenties. It’s a very different marketplace,” says Wahl.

Wahl: I was initially attracted to comic books when I was about ten, (but) my first love was journalism. I decided I wanted to be a newspaper journalist when I was five years old! By the time I was in middle school, it was going to be a race between being a comic book writer or a newspaper editor, and I went back and forth between those two career paths until one of them paid the bills. (My first career) was newspapers, but comic books have always been a hobby, and I started my website, Comics Bronze Age, partly because I wanted to stay current in social media usage and blogging. Exploring my love of comic books seemed like a good way to continue doing journalism as well.

HW: Given that we now live in a digital age, how do you hope your presentation will create discussions about the different ways we communicate in person, online, and via artwork such as comic books?

Wahl: I find that lectures and other presentations are the original social network. You get together and you explore common interests and learn from one another. The kind of work that Humanities Washington does and the programming they help provide allows people to meet together and explore such similarities and differences in an engaging environment we may not experience as much in today’s digital world.