The author of Adventures of the Karaoke King discusses his inspiration, his training as an anthropologist, his lifelong tradition of feeding a monkey on his birthday, and more.

The Seattle lawyer’s 2011 book Adventures of the Karaoke King came to him almost like a vivid dream, after he sampled the culture of nonprofessional singers belting out pop standards in after-hours nightclubs.

“There was one guy sitting at his table all alone, with a line of shot glasses in front of him,” Taw says. “He’d get up and sing, and every song he’d sing was the most heartbreaking song on earth. Things like Against All Odds, all songs with some elements of heartbreak. He’d sing, and he’d sit back down, and he’d start drinking again. I couldn’t help thinking, ‘Gosh, what happened to that guy?'”

What: Bedtime Stories Seattle 2013 [Details]
When: 6 p.m. reception, 7 p.m. dinner, Oct. 4, 2013
Where: The Spanish Ballroom at The Fairmont Olympic Hotel [Directions]
Tickets and information: Event sponsorship and information about purchasing a table at the event are available from Wendy Stauff at events@humanities.org or (206) 682-1770 x109. A limited number of individual tickets are also available.

The question spun out into the novel, which explores consumer culture and human dispossession through karaoke champion Guy Watanabe and several peer characters. Taw wove in aspects of his own experience as an American-born child of a Burmese family, as well as his previous anthropological work as a Fulbright scholar studying the spread of AIDS in Thailand. Adventures of the Karaoke King won wide praise, and Taw has embarked on a second novel as well as several other projects.

Taw also keeps a yearly ritual of feeding monkeys on every birthday, done at the behest of a Buddhist monk who told his parents the tradition would bring prosperity for his family. (For more, listen to Taw’s NPR story on the tradition.) He’ll feed listeners’ imaginations October 4th at Humanities Washington’s Bedtime Stories fundraiser, reading new work alongside fellow authors Erica Bauermeister, Rebecca Brown and Charles Johnson.

Humanities Washington: You have experience both as a lawyer and as an anthropologist. I know many lawyers have gone on to become novelists, but I don’t know of many anthropologists. Would you have been able to write Adventures of the Karaoke King without that experience? 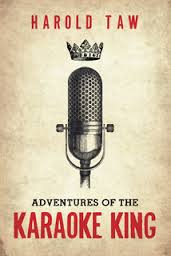 Harold Taw: I think probably not. I think in terms of anthropology, it had to do with a real fascination with how quickly things can truly change from place to place and being able to spend a lot of time talking to people about their daily lives.

One of the projects I did as a Fulbright scholar in Thailand was to interview people about AIDS, especially young men in terms of their first sexual experiences. It had to do with the industrialization of the sex industry. The growth of that industry, to where tourism became sort of a larger part of the economy than the export of rice, is pretty remarkable. And that in itself shifted the ways in which people had intimate relations. Instead of being there but being relatively uncommon, or centered around migrant labor or military service, (sex work) became both an internal commodity as well as external, in terms of first sexual experience, for almost every Thai man.

The judgment toward the profession usually came from middle- to upper-class folks, as opposed to the families that were affected, which were mostly rural folks in the north. While women are serving as prostitutes, they’re sending money home and supporting the family. It’s sort of morphed and changed, because they’re supporting entire villages where people can no longer support themselves through farming because of the low cost of export commodities.

I certainly feel like that had a huge impact on the subject matter (of the book), and so did going on to do law and seeing how culture and history, as well as law, can frequently get in the way of trying to find ways for people to live.

HW: Why did you use karaoke as the backdrop or catalyst for Guy Watanabe’s meanderings?

Taw: The book is, strangely enough, structured like a performance of karaoke, in which (there are) five different voices. There’s one main voice, but different people get to ascend the stage and tell their stories, sing their songs. It fascinated me that in karaoke in the United States but also worldwide, the most hardcore adherents will be Asian Americans, and quite frankly, the working class. You can go to a bowling alley in the middle of the New Mexico desert, which is what I did for research, and find people showing up for karaoke night to a packed house. If you’re singing and enjoying yourself, you’ll be accepted by pretty much everyone. It’s this sort of fantasy release where people can become stars for brief moments, but there’s this sort of hangover of what happens when you leave and you go back to your regular life. I always think there’s a combination of real joy and relief, as well as a kind of sadness.

HW: You completed and published Karaoke King during a very busy time in your life. Is there a tactic you can share with other writers who are trying to balance work, family, schooling and other obligations?

Taw: The most important thing is just trying to create a time and a space every day in order to approach writing, even if it’s a short period of time. It’s better to just constantly keep coming back. I mean, it’s really hard. I totally relate (to) folks who just feel overwhelmed, but I think the most important thing to remember is to sort of bring your best self to writing — to remember that the reason for writing is joy. Not that writing isn’t painful. I think every writer knows how hard it is to write and revise and bleed on the page. But I think it’s best to also remember there’s so many wonderful things out there to do, that if you’re not really enjoying writing, it’s okay. Go out and do those things, so you can come back to yourself and keep writing.

HW: You’re now developing new musicals with the 5th Avenue Theatre. Do you hope to improve your writing by using such a different media?

Taw: For me, it was a way to write but be a bit more collaborative than just doing a very long work of fiction, which is a very solitary thing. People are constantly singing and doing line readings, and it’s a very different world. For me, it’s been a part of that kind of delight. When I do turn to prose, I’m very excited to be there. I’ve had my fill of doing things collaboratively and I’m really ready to focus. That’s a mental state — but in terms of skill development, it’s been fascinating to see how different disciplines approach a story, and the strengths and weakness of each medium. In something like musical theater, its strengths have to do with character and emotion, and movement in time, because all music has to be heard in the present — while prose has to do with memory, with mimetic faculty, and its ability to reflect back and mimic the human mind.

HW: Where will you go to feed the monkeys for your next birthday?

Taw: That’s an open question this year. I have a longstanding relationship now with the Woodland Park Zoo in Seattle. They’ve been great, allowing me to come in and feed the monkeys there, but this year, it looks like we’re going to be in Hawaii, on Kauai, which doesn’t have a zoo. So some friends in Hawaii are now desperately working on finding me a monkey to feed, so I don’t have to fly back to Seattle.