As part of 40 Years of Washington Stories, we look back at the Speakers Bureau (formerly Inquiring Mind) presentations of Harvest Moon on Coastal Salish culture, which toured the state in the 1990s and 2000s. 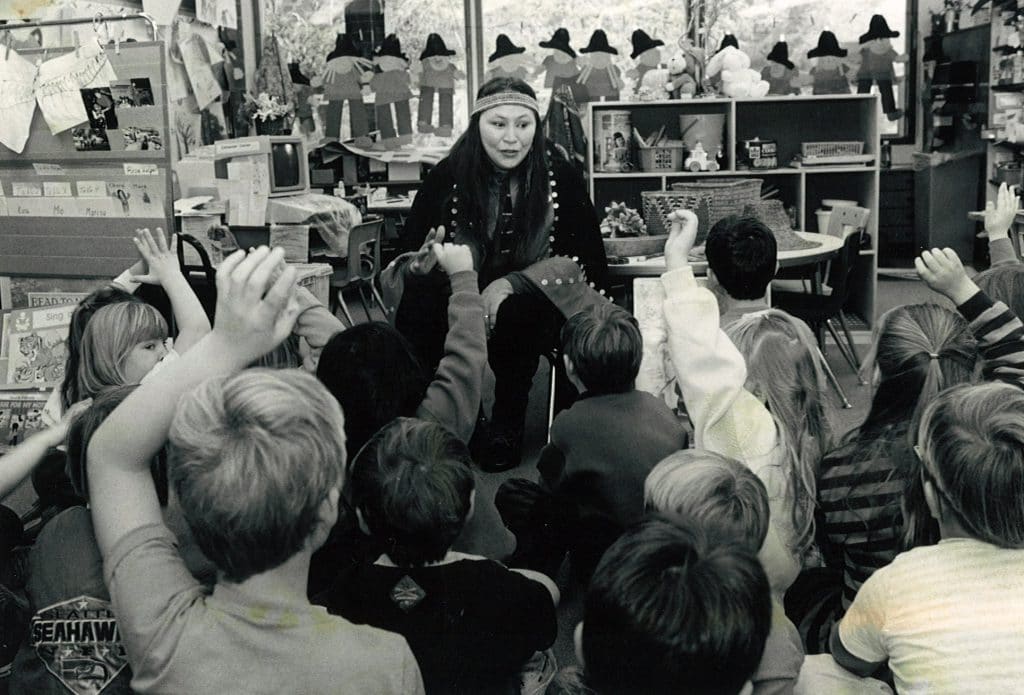 Harvest Moon delivers an Inquiring Minds presentation on Coastal Salish culture to an audience at Griffin Elementary School in 1998.

During the auditions for the 1996 Inquiring Minds program, Harvest Moon Howell was working on a new story. When it was time for her to share her sample presentation, she included part of the tale, but kept the ending to herself. “If you want to hear how the story ends,” she said “you’ll have to hire me as a presenter.”

The story must have been a good one. Harvest Moon joined the Inquiring Minds roster in 1996 and traveled with the program for 12 years, giving presentations that ranged from explanations of longhouse life to basket-weaving to storytelling. Each of her presentations introduced the audience to various cultural practices of the Coastal Salish, a loose linguistic grouping of First Nations peoples along the Northern Pacific Coast.

One of Harvest Moon’s strongest memories of the program came out of her portrayal of Mary Sam, a Klickitat woman who lived on modern-day Bainbridge Island. Mary Sam’s story, fraught with disease and suffering, had a big impact on audiences in Walla Walla. “There were farmers sitting in the audience, big husky farmers and loggers, getting tears in their eyes,” said Harvest Moon.

The stories Harvest Moon tells tend to stick with her audiences. “There’s people that, almost 20 years ago, saw my presentation,” she said. “And they say they took the stories home and told them at family reunions.” Harvest Moon still works as a storyteller and presenter through Young Audiences, which sends artists to schools throughout Oregon and Southern Washington.