Traveling Exhibit opens Sunday (April 14) at the Jefferson Museum of Art & History; exhibit invites comparisons between the 1930s and today. 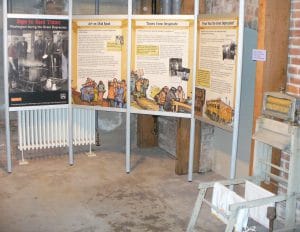 Hope in Hard Times: Washington During the Great Depression will be at the Port Townsend Museum of Art & History until June 7.

PORT TOWNSEND – Join the Jefferson County Historical Society for Hope in Hard Times: Washington During the Great Depression, opening April 14 and running through July 7 at Jefferson Museum of Art & History. This exhibit focuses on the adversity and triumph of everyday Americans, comparing the struggles of the 1930s with those faced today.

Hope in Hard Times was developed in partnership with Humanities Washington and the Washington State Historical Society, and will travel to eight communities around the state over the next two years.

Cost for All Programs: Free
On the Web: humanities.org/programs/exhibits

“The exhibit looks at real people dealing with tough times. In our current recession, this exhibit reminds us we are not alone, our fortunes are interconnected and we get through hardships as a community. Hope in Hard Times emphasizes that hope exists in all times,” said Humanities Washington Executive Director Julie Ziegler.

The exhibit is built around 10 interpretive panels featuring stories, photographs and artwork from Washington’s Depression-era past. Augmenting these traveling panels will be a variety of unique programs produced locally for the Port Townsend community, including a June 20 presentation on 1930s movies by film critic Robert Horton and a screening of Gold Diggers of 1933 on June 21, time and place TBA. In addition, the library has created a supplemental local exhibit showcasing both work and play in Port Townsend in the 1930s.

Jefferson County Historical Society Executive Director Bill Tennent said, “We’re grateful to Humanities Washington and the Washington State Historical Society for the opportunity to host Hope in Hard Times. It has given us an incentive to research the Depression in Jefferson County, where we believe the impacts were very different from those in more urban areas. We also realize how important the CCC and WPA projects were to our community. We still enjoy much of the infrastructure built by those programs.”