Seattle’s first Civic Poet fled war-ravaged El Salvador as a girl. Now she’s turning the experience into a memoir while also encouraging others to express themselves through words. 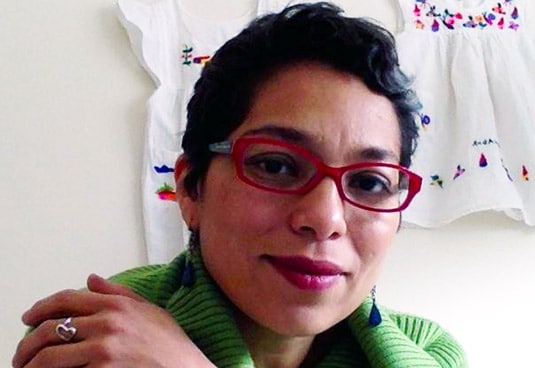 Claudia Castro Luna fled a war-torn El Salvador as a young girl, accompanied by her family: Her mother, her sister, her father—and her father’s books.

Those books — texts on language, social history, mathematics — were a strange choice of luggage for a man fleeing his home country in a time of crisis and terror. That decision has intrigued Castro Luna ever since, and became the subject of her prose piece for this year’s Bedtime Stories presentation, scheduled for Oct. 2 in Seattle. How could her father choose to escape his homeland with a box of books?

And, as Castro Luna carried those same books with her for decades, becoming a scholar, educator, and poet herself, the answer became: How could he not?

“We become very attached to them,” she says of the books we collect over a lifetime, “because they embody part of who you are. How can you let go of an arm?”

Castro Luna’s commitment to poetry and education led in August to her appointment as Seattle’s first Civic Poet — an evolving role she relishes, and is still working to define. Mayor Ed Murray bestowed the two-year position on her in light of her published work in journals including The Womanist, Milvia Street and others, praising her “deep commitment to engaging the community through her poetry.”

Humanities Washington: What is the role of a Civic Poet, to your understanding?

Claudia Castro Luna: It’s a brand new position. The city gave some guidelines, and we’re still working out some of the details. But one of the reasons the position interested me so much is because I see it as a turning away from personal work, and toward fostering a collective poetic vision in others. I see it more as facilitating poetic expression, rather than writing my own work. Of course, that is also part of the role, because the position has to be inspiring to others, but I do hope in my tenure I will be able to interact with a lot of other people in the city who perhaps don’t see themselves as writers, and encourage them to write and express themselves. I think by calling it “Civic Poet” the city did their homework — they had a particular vision they wanted to encourage.

You were born in a Spanish-speaking country, raised in the United States, and studied in Europe as an adult. Does your writing bounce back and forth between languages?

I write mostly in English. I’ve tried, with my prose, to use Spanish in it. Not so much in poetry. I write poems in Spanish, but they’re rarer. I have spent some time thinking about why that is, and I think partly it has to do with the fact I was mostly educated in the US. To a degree, I’ve been steeped in English, although I read broadly in Spanish. Somehow, my default just goes to English. Part of the reason why I’m still drawn to poetry is because it’s limitless, and it allows for so much linguistic flexibility. A lot of times, in my loose thinking, the words come out expressed in English, but the form or rhythm sometimes is very mixed.

When you write, does the well-turned phrase come forth first, or is it a sculptural process to refine a specific feeling into words?

A lot of times it’s the word itself. A phrase will appear, and I will work with that phrase — and a lot of times it happens that a phrase will come, and if I don’t write it down right away, and don’t capture the particular word central to the expression, I will lose it. Even if I come back and find the feeling that was contained in those words, it’s very hard to trace my steps back. I did a workshop in British Columbia with Gregory Orr and a few other folks, and we talked a lot about that process of writing. And in that conversation, I realized that yeah, a lot of it for me is stored in individual words, rather than a feeling I then try to narrow into poetic expression.

You’ve been at work on a memoir of your Salvadoran family and upbringing. Is there a difference between mining sensation for poetry, and investigating memory for a nonfiction work?

It has proven to be exactly that way for me. The memoir has been a very taxing and very long project — partly because I was fourteen when we left, and partly because a lot of it is very traumatic. It’s a tale of war. So attacking all the fear and trauma has been difficult emotionally, just trying to put that on paper and capturing that. War and the aftermath of war is really how this has played out in my life. It shaped to a large degree the person I have become. So yeah, it’s a difficult process, and for a long time I tried to do it in poetry, and I couldn’t quite get it to work — partly because we are so succinct with a poem, and this is a story that needs more context. I abandoned my work trying to tell this through poems, because I needed more context, and I couldn’t make it happen. That’s why I made the switch.

Is Seattle a poetic city? By that I mean, are its citizens attuned to poetry, and is it a place that can inspire a poem?

Oh my god, both. Those two things are very true. I think Seattle is rich with venues and opportunities to hear poetry, and people turn out. I’ve done readings in little cafes and in bigger venues, and sometimes there’s a few folks, sometimes there’s a lot of folks — but there’s always folks. So I do think it’s a literary city, and part of my hope is that I’ll be able to deepen that a little bit. Some people are already tuned into that world, and there’s others that may not have been brought into the fold. So part of my vision is bring more folks into that poetry world of the city. And it’s also true that it is such a gorgeous place to live — and the weather conspires a lot to keep you writing.

2 thoughts on “How War and Words Shaped Claudia Castro Luna”