ISIS and the Fight for Islam

How Islamic is the Islamic State? Read excerpts from our recent Think & Drink in Yakima. 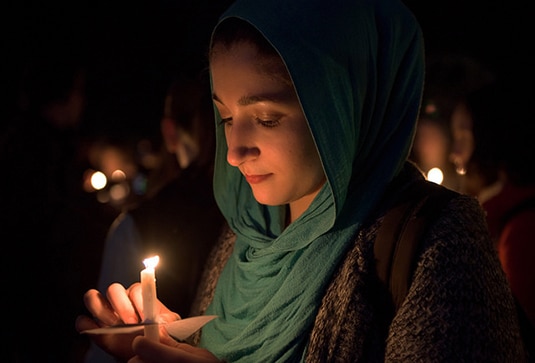 A woman holds a candle at a vigil at Penn State for victims of the November 13 terrorist attacks in Paris. Photo: Penn State, via Flickr/Creative Commons

The threat of ISIS has pervaded international consciousness and become a serious topic of concern, particularly after the recent murders of 130 people in Paris.

American public opinion on our involvement and responsibility to intervene varies greatly, but many of these conversations revolve around some fundamental questions: Who joins ISIS and why, and what does ISIS want?

Often these questions start with the root of ISIS’s religion: Islam. From beheadings to slavery, the brutality of ISIS has shocked the world, and the group often cites Islamic law as justification. So how faithful is ISIS to Islam? Is ISIS manipulating the Quran for its own purposes, or is it an honest interpretation of Islamic law? In short, how Islamic is the Islamic State?

On September 16, Humanities Washington hosted a Think & Drink event in Yakima titled “ISIS and the Fight for Islam.” Panelists included Sarah Eltantawi, an Evergreen State College professor of Middle Eastern studies and comparative religion, and David Fenner, former assistant vice provost for international education at the University of Washington and a specialist on Islam. Fenner also presents a Speakers Bureau talk, “Islam 101: Perceptions, Misconceptions, and Context for the 21st Century” at venues around the state.

The following are excerpts of the hour-long discussion at Yakima’s Gilbert Cellars:

“ISIS thinks that it is the new caliphate. There’s a concept in Islamic tradition called tajdid, which means renewal, that believes with every generation comes along a leader that renews the faith. ISIS believes that any sort of liberal manifestation of the Islamic tradition, any kind of pluralistic manifestation of the Islamic tradition, all of this is heretical. It is moving us away from the original message of Islam, is their theory, and therefore it is up to them to create a new caliphate. Now, that’s a theological reading of ISIS. Most people prefer a political reading of ISIS, which is that they’re simply trying to take territory and using the Islamic tradition as a means to do that. […] I’m in the camp that thinks you can’t totally take away the theological explanation, because it is in the Islamic tradition, and it is very powerful, and they do take advantage of it. But there’s also a very, very deep political background and a political ends that they’re trying to meet by forming what they call the Islamic State. The question here, in my opinion, and one of the biggest questions in Islam in the 21st century, is the question of authority. Who says that you get to be a caliphate? How can you give yourself the authority?”

David Fenner on ISIS interpretation of the Quran:

“The deeper I read the Quran, I am struck by how many different kinds of passages there are in the Quran. Just as there are in the Bible, there are violent and peaceful aspects to both, to these foundational scriptures. And what I think ISIS does, and a lot of religious scholars agree, is that they cherry pick. And what’s interesting about this is that they pass over all the parts that say ‘protect the Christians and the Jews ‘til time immemorial.’ They pass over the part that says, ‘If you kill one human being, it’s like you kill all of humanity,’ and instead they have cherry picked the verses that support their violent territorial gang-like grab of power.”

Sarah Eltantawi on the origins of ISIS:

“ISIS is made up of former disempowered Baathists from Iraq. The Baathists were the people formerly in power in Iraq under Saddam Hussein. During the American invasion the Baathists were defanged. If you were a Baathist (that’s the name of a political party), you had to go into hiding or you were jailed or you were targeted by the new Shia-dominated regime. This is a consequence of our invasion of Iraq. So it became Shia dominated, and they formed an alliance with Iran. So Iraq was ruled by a minority government, and the Americans came and removed that government, empowering the Shia. So the former Sunni group that was in power has really been discriminated against in a big way in Iraq until now, and many members of ISIS are members of that former group.”

“I hope what you come away with at the end of the evening is that how [ISIS] is portrayed in the popular media and in our culture is really besmirching a religion that is neither violent nor peaceful. It is full of people who are both. But what I hope that you will walk away with is this: Don’t call the body the little toe. Don’t call the little toe the body because there is this thing that is ISIS way down there followed by very few people, but they’re loud, they’re violent, they’re grabbing territory, and what they’re doing I think is a tremendous disservice to their faith. The faith is sort of a neutral thing. You can take the good parts, you can take the bad parts, and you can follow it. You can be a good person or a bad person, but what ISIS is doing is really corrupting it, not only in their practice, but in the minds of the people around the world who are confusing Islam with ISIS.”

Thanks to Caroline Epstein for transcription.

1 thought on “ISIS and the Fight for Islam”