Photo: Barrett Jackson Auction Back To All Blog Posts

From flying cars to “pigeon hole parking,” here are several of our state’s weirdest and most wonderful transportation ideas.

Whether it’s traveling from one side of the country to the other or just making your way across town, getting there can be an exciting adventure or an annoying, time-consuming trek.

Sometimes both at once.

Washington on Wheels, my presentation for Humanities Washington’s Speakers Bureau, I look at everything from tribal canoe journeys, to the challenges early settlers faced in making wagon journeys west, to more modern and unusual transportation ideas and inventions that hail from our state. 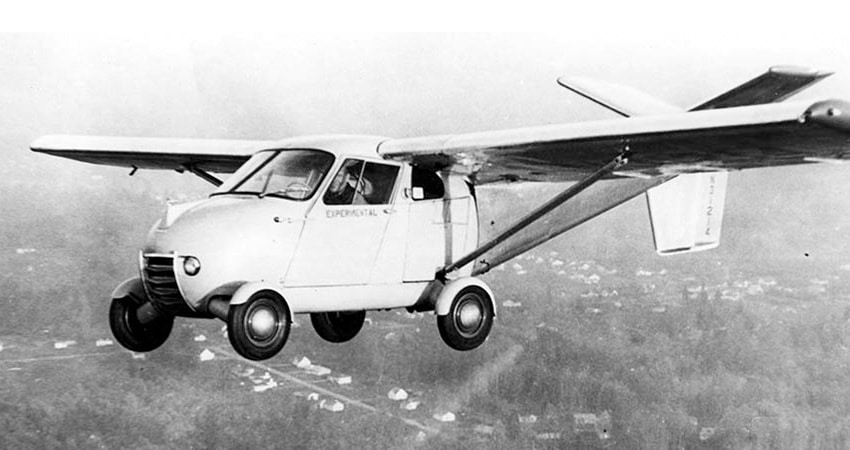 Science fiction – and The Jetsons cartoon show from the 1960s – made many of us believe that by now we’d all be zipping around in our own flying cars.

Modern day aviation and automobile manufacturers are hard at work trying to make that dream a reality, but flying cars are not that new.

In the late 1940s, Moulton (Molt) Taylor, an inventor and former navy pilot from Longview, built and flew a flying car he dubbed the Aerocar.

The two-passenger vehicle was a small car with a four-cylinder engine, but it also had a rear propeller and a foldable set of wings that could be towed behind the car and easily attached when the driver wanted to fly.

According to Jake Schultz, author of A Drive in the Clouds: The Story of the Aerocar, “Molt would see small planes parked at the airport and say ‘Look at all those planes, they’re just sitting there. And not one of them can drive to the store!’”

Taylor created a prototype Aerocar in 1949, followed by at least five other versions of his invention. After the Civil Aeronautics Administration certified the Aerocar in 1956, TV star and aviation enthusiast Bob Cummings bought one and could be seen flying the car in the opening credits of his early 1960s sitcom, “The New Bob Cummings Show.” Schultz says another Aerocar prototype was used for a time as a traffic reporting aircraft in Portland, Oregon.

Although there was widespread interest in Molt Taylor’s flying car, including from the Ford Motor Company, Aerocars never went into production.

Today, Seattle’s Museum of Flight displays the Taylor Aerocar III. You can see Moulton Taylor show off his Aerocar in this newsreel from 1949 and in a clip from his appearance in 1959 on the TV show “I’ve Got a Secret.” 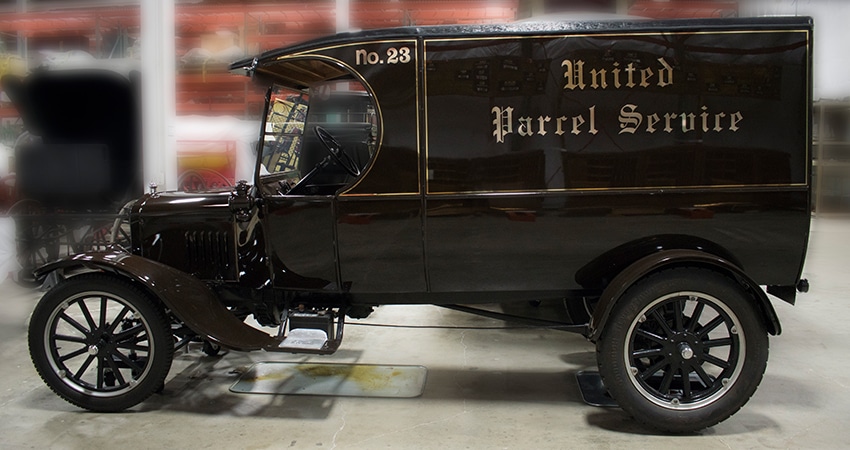 A replica of the first UPS truck, courtesy Museum of History and Industry (MOHAI)

Two companies now well-known for moving things around were founded in Washington.

The worldwide package delivery service, United Parcel Service (UPS), got its start in 1907 when James “Jim” Casey and his friend Claude Ryan borrowed $100 and started a messenger service in the basement of a Seattle saloon.

According to UPS, between 1907 and 1912 messengers “ran errands, delivered packages, and carried notes, baggage, and trays of food from restaurants,” on foot or by bicycle. The company really found its niche, though, in 1913, when it purchased its first delivery car, a Model T Ford, and turned its attention to delivering packages for retail stores.

“Molt would see small planes parked at the airport and say ‘Look at all those planes, they’re just sitting there. And not one of them can drive to the store!’”

Though founded much later, U-Haul also found success in the business of moving things around.

Early settlers came west with their belongings in covered wagons, but when L.S. “Sam” Schoen and his wife Anna Mary Carty Schoen were moving from Los Angeles to Portland in 1945, they couldn’t find a trailer to rent to pull behind their car.

That commercial service didn’t yet exist, but by the time the Schoens, their young son, and their car full of possessions made it north, they’d come up with the idea to create a business that would let people rent a trailer in one city and leave it in another.

The Schoens moved to and developed their U-Haul concept in Ridgefield, Washington, about 23 miles from Portland, on a ranch owned by the Carty family. And, according to U-Haul, “by the end of 1949, it was possible to rent a trailer one way from city to city throughout most of the United States and by 1955 throughout most of Canada.” 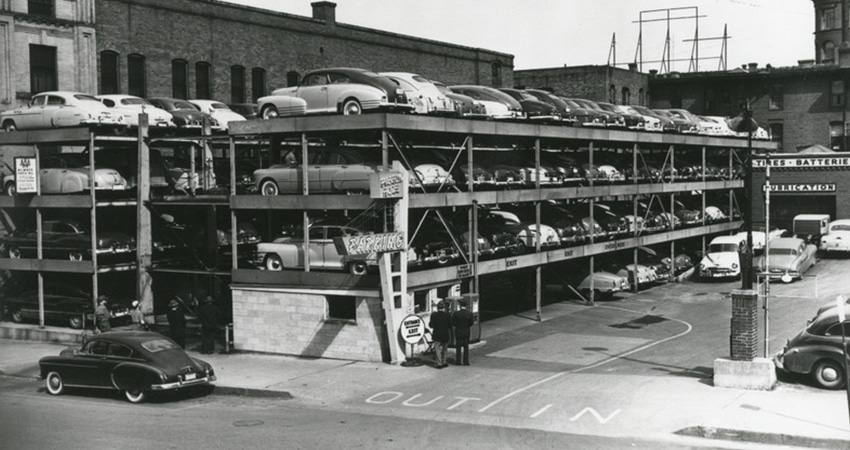 The next time you find yourself driving up and down ramps in a parking garage looking for an empty spot, think of how great it would be if Pigeon Hole Parking garages were still around.

In 1932, a vertical automatic parking machine debuted in Chicago that used a Ferris wheel-type system to park up to 48 cars above a city lot that would usually hold just six cars.

That idea didn’t catch on, but in the late 1940s, brothers Leo and Vaughn Sanders of Spokane patented a twist on that idea.

Instead of a giant rotating machine to store cars, the Sanders created a multi-story steel structure with slots or ‘pigeon holes’ like the sorting compartments seen in antique desks.

A hydraulic lift was used to pick up a car and place it in a parking slot and then retrieve the car when requested. The elimination of ramps meant that more than 100 cars could be parked on the footprint of a very small lot.

The first Pigeon Hole Parking garage opened in Spokane in 1950. Not long after, Spokane had four Pigeon Hole Parking structures, including one at the Davenport Hotel, an elegant and ornate hotel that prided itself on having the latest in state-of-the-art amenities.

During the 1950s, an estimated 60 Pigeon Hole mechanical parking garages were built in Portland, Los Angeles, and other cities.

Harriet Baskas is currently presenting her Speakers Bureau talk, “Washington on Wheels: Odd and Innovative Transportation Ideas from the Pacific Northwest,” around the state. Find a free event here.