This weekend is your last chance to register for the literary celebration where Spokane authors read original short stories. 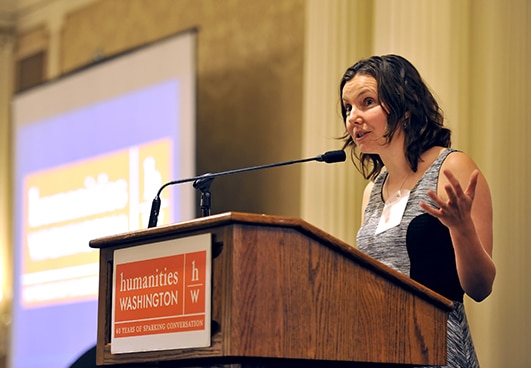 Bedtime Stories is Humanities Washington’s annual fundraising event, and this year will be presenting four new works by prominent Spokane writers. At the Spokane Club, Kris Dinnison (You and Me and Him), Sam Ligon (Safe in Heaven Dead), Sharma Shields (The Sasquatch Hunter’s Almanac), and Jess Walter (Beautiful Ruins) will unveil short stories based on the event’s theme “A Hard Day’s Night.” They will be joined by emcee Gary Stokes (KSPS Public Television).

The night will also include the presentation of the Humanities Washington Award for scholarship and service to Dr. Tod Marshall for his outstanding contributions to the public humanities. The award is given annually in memory of Heather C. Frank of Yakima.

Kris Dinnison spent nearly two decades as a teacher and librarian while dreaming of becoming a writer. Her first novel, You and Me and Him, was published this summer by Houghton Mifflin Harcourt.

Samuel Ligon is the author of Drift and Swerve, a collection of stories, and Safe in Heaven Dead, a novel. His new book, Among the Dead and Dreaming, is forthcoming in April 2016. His short fiction has appeared in Prairie Schooner, New England Review, and other journals, and his essays appear in The Inlander. Ligon serves as Artistic Director of the Port Townsend Writers’ Conference, and teaches at Eastern Washington University in Spokane. He edits the journal Willow Springs.

Sharma Shields is the author of the short story collection Favorite Monster, winner of the 2011 Autumn House Fiction Prize, and her work has appeared in numerous journals, including The Kenyon Review and Iowa Review. Shields’s debut novel, The Sasquatch Hunter’s Almanac, was published by Henry Holt in 2015.

Jess Walter is the author of six novels, most recently Beautiful Ruins. A finalist for the National Book Award in 2006 for The Zero, Walter won the Edgar Allan Poe Award for Citizen Vince in 2005 and the Pacific Northwest Booksellers Award in 2007, and has been a finalist for the LA Times Book Prize and the PEN USA Award in both fiction and nonfiction. His stories have appeared in Harper’s, Esquire, McSweeney’s, Best American Short Stories, and Best American Nonrequired Reading, among others. His books have been published in 22 countries and he recently adapted his novel The Financial Lives of the Poets for film.

The event is sponsored by Amazon.com and the Amazon Literary Partnership, as well as the Hagan Foundation Center for the Humanities at Spokane Community College.

For information about purchasing a table, contact George Abeyta at george@humanities.org.