The Baybayin symbol for "ka" means "connection" and is sometimes associated with the Filipino concept of "kapwa." The concept has been described as an "intense spiritual connection typically felt among Filipinos." Back To All Blog Posts

Kapwa and the Future of the Humanities

In a Filipino community hall in the Yakima Valley, a researcher finds community, connection, and a path forward for the humanities.

When I pulled up to the majestic white building emblazoned with “Filipino Community of Yakima Valley Wapato, Wash. Welcome,” I had immediately forgotten that three and a half hours was quite a ways to drive for Filipino food. Upon entering the building, I was overcome with the sights, sounds, and smells of home.

When asked about my work with the Filipino American Community of Yakima Valley, I joke that it was motivated by my longing for lumpia and pancit. As a third-generation Filipina born and raised on the island of Guåhan, I was raised in tight-knit community often situated around food. Upon first walking into the hall in June of 2019, I quickly observed the lines of people, whom I later learned came from as far as Ellensburg, hungrily making orders of lumpia, pancit, and adobo during the hall’s weekly Thursday Takeout. Joyfully greeting the patrons were aunties and uncles bustling between the front desk and kitchen. That day, I found in the hall what I had been missing—more than lumpia and pancit—since moving away from my island home to Washington. What permeates through the hall and its history is kapwa, what Filipino American scholars like Kevin Nadal and E.J.R. David describe as the an intense spiritual connection typically felt among Filipinos, salient even in diaspora. 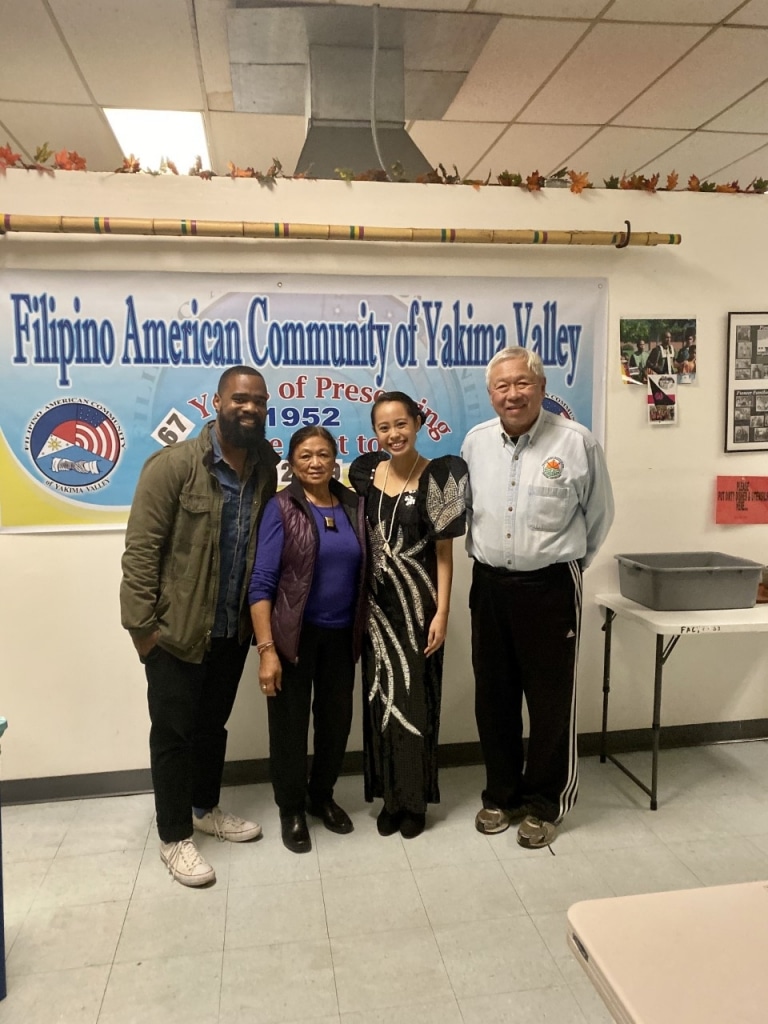 In addition to nourishing my soul and stomach, this project was intellectually nourishing, as well. It emerged as a means of exploring several questions: What are the challenges or obstacles faced by humanities councils in engaging local communities? How can outreach involve these communities in meaningful way and provide relevant resources? More broadly, how can authentic relationships be established between humanities councils and the communities they serve? The task of this project was to begin answering these questions with the Filipino American Community in Yakima Valley and Humanities Washington, in ways specific and relevant to their organizational visions. A key component of this project was dialogue with the community to ensure mutual benefit and organic relationships through ethical approaches that resist exploitation of resources and labor and center the community’s histories and stories. Simply put, I wondered how humanities councils and communities can share together in the work of the humanities. That prepositional difference, I believe, is the critical distinction between performative benevolence and the shared responsibilities at the core of kapwa.

I wanted that prepositional difference to also be reflected in my approach to this project. In working with the Filipino American Community of Yakima Valley and Humanities Washington, it was the sharing of values and responsibilities that I found most rewarding and most invigorating. That day was also when I met Auntie Lorena Silva, my primary collaborator. As chairperson of the hall’s Filipino American National Historical Society chapter and daughter of one of the founding members, she is considered by many the heart and backbone of the community. When we initially discussed the project, she admitted tearfully, “We thought that people had forgotten about us.” Uncle Peter Sotelo and Uncle Greg Sotelo, sons of another founding member, excitedly recounted the hall’s stories through the largest collection of Filipino/Filipino American history in the Yakima Valley, including photos, documents, and artwork through generations of family members who helped establish the community in 1938. Walking through the murals on the walls, Uncle Peter’s evocative renderings of this history, felt like walking through time. Auntie Carrie Huie-Pascua, Commissioner with the State of Washington Commission on Asian Pacific American Affairs, described the hall as integral to the city of Wapato, acting as a meeting place and cultural center for the Yakima Valley and including in its membership newly immigrated Filipinos and Filipino Americans, as well as those from the Latinx community and Confederated Tribes and Bands of the Yakama Nation. Ernesto “Charro” Cruz, professor at Heritage University, described how the community is deeply invested in various aspects of the city’s history, arts, education, and cultural traditions. As an example of their far-reaching influence, Uncle Rey Pascua, former long-time president of the Filipino American Community of the Yakima Valley, recounted his decades-long lobbying to establish October as Filipino American History Month in the state of Washington.

Through the summer of 2019, and even to the end of the year, Todd Butler, author of the grant and director of the Publicly Engaged Fellows program, provided us significant latitude, and trust, in developing our project. Dustyn Addington, Director of Programs at Humanities Washington, immediately recognized the worth of this project, acknowledging the Asian American and Pacific Islander communities as a gap population underrepresented in current humanities programming and gave unwavering, enthusiastic support, guidance, and resources. He eventually connected us with Langston Wilkins, Director of the Center for Washington Cultural Traditions at Humanities Washington, to coordinate the roundtable, “Visions of the Past, Present, and Future with the Filipino American Community of Wapato,” in October, to commemorate the community’s involvement in Filipino American History Month. Anna Plemons, my faculty mentor, brought her decolonial methodologies expertise to the execution of the project and her family to enjoy the performance of Batang Wapato, a youth organization of the Yakima Valley supported by the Filipino American Community that provides education and training in the rich cultural traditions of Filipino music and dancing.

“I wondered how humanities councils and communities can share together in the work of the humanities. That prepositional difference, I believe, is the critical distinction between performative benevolence and the shared responsibilities at the core of kapwa.”

These conversations generated enthusiasm because they were foregrounded in the values of indigenous methodologies—respect, reciprocity, relevance, and responsibility—essential to any work with the land and its people. I acted primarily as a listener, liaison, and learner. Like me, Humanities Washington wanted the project to be rooted in respect, with a desire to explore ways to manifest and extend that respect and move from intentions, to reflection, to substantive action. It was reassuring that all collaborators are engaged in the humanistic endeavor of celebrating the human experience, in its many ways and forms. By actively pursuing these conversations and communicating not just an invitation, but, more significantly, opportunities for involvement in current Humanities Washington programming, the project moves beyond mere access to sustainable relationship.

The resilience of these relationships was tested a year later, in the crisis of a global pandemic, when the Filipino American Community of the Yakima Valley Hall was unable to conduct its community outreach events, such as a film screening about their history, a Filipina author’s book talk, and performances by Batang Wapato, a Filipino youth dance troupe. The Hall was also forced to suspend its Thursday Takeout services, their main source of revenue. Auntie Lorena called me, at a loss but hopeful, and I worked with her and several other aunties and uncles over the phone to write the application and the final report, transcribing details word-by-word and learning new modalities for communication. Through the generosity of Humanities Washington and the National Endowment for the Humanities, the Filipino American National Historical Society received CARES Act relief aid to continue serving its communities statewide.

Just like home, this project was a series of conversations, often involving good food. In fact, I conceive of my entire project as contributing to the larger conversation of humanities outreach throughout Washington, aiming to include more contributors to this conversation and create more partnerships in the greater work of the humanities. Furthermore, this work is critical to Humanities Washington’s values of diversity, equity, and inclusion, wherein the starting point is not just a theoretical question of obstacles but rather confronting practical questions of who is not included in the humanities landscape. Through this project and others like it, Humanities Washington can forge deeper connections to make its programming accessible and meaningful to all Washingtonians. While this work is just a beginning, this project has provided an ever-expanding vision of the past, present, and future of the humanities through conversations, collaboration, community, and the strength of kapwa.

Tabitha Espina, Ph.D., is Assistant Professor of Rhetoric and Composition at Eastern Oregon University. She was a Graduate Fellow for Humanities Washington from 2019-2020 and National Endowment for the Humanities Publicly Engaged Fellow.