The Seattle superlibrarian and Bedtime Stories emcee tells us what she’s reading at the moment and talks about her Book Lust series.

One of the advantages of being a superlibrarian is you get to read all the cool stuff first. “I’m reading Sweet Tooth, the new Ian McEwan novel — it’ll be published in November,” says Nancy Pearl. “I’m quite liking it.”

Pearl’s celebration of the book is so forceful that the former librarian convinced all of Seattle to read the same book, inaugurating a public reading program in 1998 that was quickly adopted by other cities across the United States. As director of the Seattle Public Library’s Washington Center for the Book, she used radio to spread the word about novels and nonfiction she felt deserved attention — a project that culminated with Book Lust, a 2003 compendium of her favorite reads that became a surprise bestseller itself and begat three sequels.

The year 2003 proved a big one for Pearl when she also became the model for the Librarian Action Figure from Seattle toy company Accoutrements — complete with button-powered shushing action. The real, non-plastic Nancy Pearl emcees Humanities Washington’s next Bedtime Stories gala, held Friday (Oct. 12) in Seattle.

Humanities Washington: Your Twitter icon represents you as an eight-armed goddess figure with a book in each hand. How many books do you read in a given span of time, like, say, one month?

Nancy Pearl: I just love that octopus — a former student designed it for me. The number of books I read in any given period really depends on what books I’m reading — nonfiction takes longer than fiction, a serious novel (Ian McEwan, which I’m reading now) longer than a mystery, and so on. So it’s really hard to say. Basically it’s fair to say that I don’t really have a life, I just read about it. 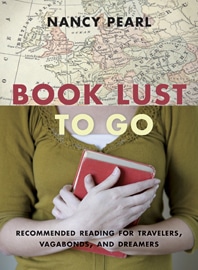 HW: Your Book Lust Rediscoveries series is putting some of your favorite out-of-print books back in circulation through Amazon, with print and Kindle editions. One of them, Merle Miller’s A Gay and Melancholy Sound, is a novel you’ve been advocating for years. What criteria do you apply when choosing books for the series?

Pearl: The only criteria I used in selecting the 12 books for the series is that I loved them and wanted more people to read them. They’re all very different and really have only one thing in common — they’re all character-driven novels. When you finish each one you’ve grown to care about the main character so much that you find yourself wondering what happened to them next, after the book ended. Or at least I did.

HW: Now that my wife and I both have Kindles, she gets peeved with me for buying books and contributing to our overstuffed shelves. I like printed books better. Is one format superior to the other?

Pearl: I don’t think one format is intrinsically superior to the other. All I know is that, try as I might, I just don’t enjoy reading on an e-reader. And I’ve tried them all. It simply doesn’t feel like reading to me.

HW: Your Book Lust series is up to four entries now, including Book Lust To Go for travelers and Book Crush for young readers. What will the next edition bring?

Pearl: I’m pretty sure that there won’t be another book in the Book Lust series. There were some omissions that make me sad, like Marilynne Robinson’s Housekeeping. But for newer books that I’m loving, I basically tweet about each one.

HW: Young adult fiction has deluged the marketplace, and its most successful example, the Twilight series, has been criticized as hackneyed, sexist and regressive. Yet it’s read by the millions. When young people rush to read a bestseller, should adults be overly concerned about its content, or simply glad that young people are reading?

Pearl: This is one of those questions where I have to put on my librarian hat to answer. What I’ve always said is that if, as a parent, you’re concerned about what your child is reading, then read the book yourself, before you give it to your child. Nobody but you can make a decision about whether a particular book is right for your child. That being said, I think there are a lot of really good books for teens being published these days.