The chair of the National Endowment for the Humanities reveals his reading habits, the book that changed his life, and how writing in the margins can come back to haunt you. 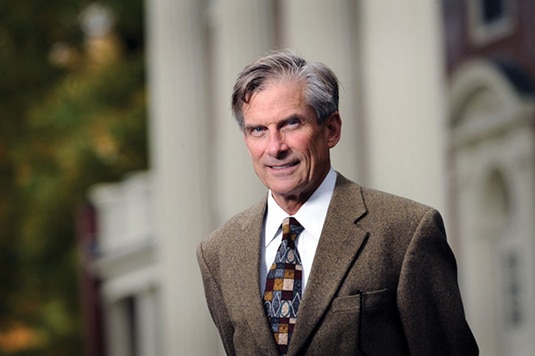 William D. Adams is chair of the National Endowment for the Humanities (appointed by President Obama in 2014) and former president of Colby College. Reading Habits is a recurring series that asks authors, artists, leaders, and others about their lives as readers.

What are you reading right now?

I tend to read multiple things at the same time. I just finished a book by Robert Dallek on the history of Lyndon Johnson because I’m speaking at the LBJ Presidential Library on Tuesday night. I wanted to refresh my memory on certain details of his life and his relationship to the NEH. I’m reading a humorous book on Washington called This Town, which a lot of people have read in Washington, about the odd life there. It was written by a reporter who lived there for 20 years [Mark Leibovich].

I’ve also been reading some philosophy. I’m in this book discussion group devoted to the work of a French philosopher that I’m very interested in, Maurice Merleau-Ponty. The groups meets at George Washington University and we talk about his work. And I’ve been reading all sorts of things on the history of the NEH, all kinds of documents that we have at the agency so I can speak about the history. And I just finished a new edition of the letters of the painter Paul Cezanne, about whom I’m writing. Or thinking of writing.

A biography of Cezanne?

No, it’s kind of hard to describe. It’s a little bit of a travel narrative, and a bit of an intellectual history involving Maurice Merleau-Ponty and Paul Cezanne. It’s a project I’ve been working on for a couple of years.

What’s a book that changed your life in a significant way?

A book by a philosopher at Colorado College [J. Glenn Gray] called The Warriors: Reflections of Men in Battle, about his experience in World War Two. It certainly changed my life. I had just come back from Vietnam and I was struggling to understand my experience and he really helped me. I also knew him, so it was a double benefit.

You become the librarian for the entire world. As part of your newfound powers, you get to require everyone on earth to read one book. Which one would it be and why?

Boy that’s tough. I’m not wild about the idea of requiring all people to read one book! [Laughs]

On my Facebook page I have several books listed as my favorite books. In no particular order of importance is the great novel by Flaubert, Madame Bovary. Another is the great history of the Holocaust by Hannah Arendt, Eichmann in Jerusalem. Another that I just find dazzling is the book—not the film—A Beautiful Mind.

When you’re reading, what are you typically holding: a paper book or an e-reader?

A paper book. I have nothing against e-readers; I’ve just never gotten into them for some reason.

Your favorite place to read?

The Library of Congress

Is there a book you’d consider a classic but isn’t?

That’s a good question. Something you think should be added to the canon of significant works. A book you think should get more respect as a work of brilliance or lasting quality, but that hasn’t been widely acknowledged as such.

Well The Warriors isn’t as widely known as it should be. I don’t know if it would be considered “canonical” though. Canons come and canons go, you know? I do think it’s a book that should be much better known than it is.

Do you ever read with music on?

I do. Usually classical music, something not too interruptive. Though I suppose a classical musician would cringe to hear me say that. But you don’t want music that takes you away from the focus on the text.

Why do you put music on?

Good question. I guess I like the sensation of being in a room with sound if I’m in the room alone, which is mostly what I am when I’m reading.

Do you ever use music to enhance the atmosphere of a particular book you’re reading?

I don’t think so.

So you could put on a jaunty Mozart piano concerto while reading a particularly grisly book about war?

It’s not a soundtrack, in other words…

Not a soundtrack. [Laughs]

Where do you buy most of your books?

I hate to say this but it’s true: Amazon. Almost every book, frankly.

Longest number of hours you’ve ever spent reading something?

[Thinks] It had to be one of those breathless experiences where you read something all the way through. I remember getting so immersed in One Hundred Years of Solitude that I couldn’t put it down because it was such a world—such an enclosed world.

Do you write in the margins?

Not as much as I used to. If I’m reading texts related to the book I’m writing I will, but always with pencil. I’ve learned the hard way. With pen you end up finding the notes you wrote when you were 25-years-old and you go, “Why did I think that?” [Laughs]

The National Endowment for the Humanities is celebrating its 50th anniversary in 2015. More.