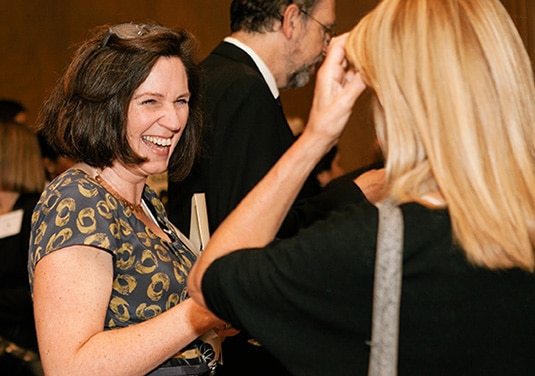 The evening features a reading of three new works written for the event by prominent Pacific Northwest writers. At the Spanish Ballroom of the Fairmount Olympic Hotel, Charles Johnson (Middle Passage), Nancy Horan (Under the Wide and Starry Sky), and Claudia Castro Luna (Seattle’s first civic poet) will read original short stories based on the event’s theme, “A Hard Day’s Night.” They will be joined by emcee Kathleen Flenniken (2012-2014 Washington State Poet Laureate) and musical group The Bushwick Book Club. Funds raised from the gala support public humanities programs throughout the state.

Claudia Castro Luna is Seattle’s newly appointed Civic Poet. Born in El Salvador, Castro Luna came to the United States in 1981. She has an MA in Urban Planning, a teaching certificate, and an MFA in poetry from Mills College. Her poems have appeared in Milvia Street, The Womanist, Riverbabble, and forthcoming in the Taos Journal of Poetry and Art. She is working on a memoir about her experience escaping the Salvadoran Civil War. She’ll be debuting a short story, “Ex Libris,” for Bedtime Stories. She lives in Seattle.

Nancy Horan’s first novel, Loving Frank (2007), chronicles a little-known chapter in the life of American architect Frank Lloyd Wright. It was translated into sixteen languages, remained on the New York Times bestseller list for more than a year, and in 2009 was awarded the James Fenimore Cooper Prize for Best Historical Fiction. Under the Wide and Starry Sky (2014) explores the shared journey of Robert Louis Stevenson and his spirited American wife, Fanny, in a sweeping adventure that unfolds over eighteen years and three continents. For Bedtime Stories, she will be debuting a story titled, “Summer Job.” She lives on Whidbey Island.

Charles Johnson is the author of numerous books including Middle Passage (winner of the National Book Award in 1990), and is a professor at the University of Washington. He is the recipient of a MacArthur Genius grant, NEA and Guggenheim fellowships, two Washington State Governor’s Awards for literature, and numerous other accolades. He’ll be debuting an original story, “The Night Belongs to Phoenix Jones.” He lives in Seattle.

Registration is now open. For event sponsorship and information about purchasing a table, contact George Abeyta at george@humanities.org.