A Northwest News Network audio interview with Kathleen Flenniken reveals more about the poet laureate’s connection to her hometown of Hanford. It also features Flenniken reading short, personal selections of her poetry.

Northwest News Network recently interviewed Washington State Poet Laureate Kathleen Flenniken about her connections to her hometown of Hanford. The piece, by reporter Anna King, appeared on National Public Radio stations around the region. King has kindly allowed us to crosspost the piece here on Spark, so you can stream, download or read a transcript of the interview below.

Also, if you missed it, check out our recent interview with Flenniken about her first quarter as the state’s poet laureate. 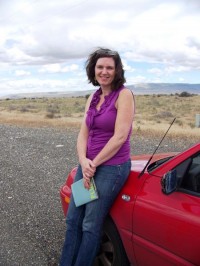 RICHLAND – There is a lot written about the Hanford Nuclear Reservation in scientific journals, news articles and government reports. Now there is a book of poetry. The state of Washington’s poet laureate recently released a book of remembrances about her hometown of Richland. It’s called Plume.

We’re on the shore of the Columbia River at a Richland park. A flotilla of students, in bright kayaks, paddle against the current.

Poet Kathleen Flenniken remembers playing in this park as a child. She also remembers when Hanford scientists would survey fishermen about their catch. She wrote a poem about it:

… And someone drove to
the public dock with a clipboard and
tallied species and weight.
Chatting with his
neighbors, Which fish
are you keeping? How many do you eat?
And someone with a slide
rule in a pool of light
figured and refigured the
radionuclide dose. Too high. Experimented
frying up hot whitefish. No. No.
Then someone decided
All the numbers were
wrong. Someone from our town. Is that
why we were never told? While
someone fishing –
that little boy; the
teacher on Cedar Street –
caught his limit and
never knew.

Flenniken’s mother and father worked at Hanford. She says living in Richland was strange but wonderful. Everyone’s government-built ranch house looked the same. All the adults were young. And with no extended family nearby, neighbors grew closer.

“I still idealize some of those parts of childhood,” Flenniken says. “The part where everyone, no one knew what any of the dads did, so there was no stratification based on your dad makes more money than my dad. It just didn’t come up.”

Flenniken dedicated her new book to her best childhood friend. Carolyn Fazzari joined us at their old neighborhood, where they once walked laps with their dollies along the sidewalks. Fazzari says they knew everyone for blocks.

“You know how in a fairytale there is this wonderful surface story, where everything looks idyllic and happy and the sun rises and sets, and the stars come out at night,” she says. “But the funny part of a fairy tale is that there is always something lurking – that’s waiting to happen.”

What was lurking for Fazzari’s father and mother was cancer. It killed them both, her mother just last year. Her father worked at Hanford in some of the dirtiest jobs – like milling uranium slugs or volunteering to clean up radioactive messes.

… We pulled up our covers
While our overburdened fathers
dragged home to fix a drink,
And some of them grew sick –
Carolyn, your father’s marrow
testified. Whistles from the train,
The buses came, our fathers left.
Oh Carolyn – while the rest of us slept.

“There is not much to say,” Fazzari says. “It’s just how someone’s known you your whole life and knows kinda how you feel about things and says things that you probably could never say so well.”

Washington’s poet laureate not only grew up here, she worked at Hanford for a time. In the 1980s she helped pick sites for some of Hanford’s so-called called cribs. That’s where radioactive liquids were dumped into pits in the desert.

The federal government is now trying to clean up those crib sites and the contaminated groundwater plumes beneath them.

On our drive through town I ask Flenniken, “Do you feel partly responsible for the story of Hanford?”

“I guess I don’t,” she answers. “I was there I saw it. I mean we analyzed soils, we didn’t design those cribs, we didn’t put them in, we were looking for a place where they would work best …”

These days Flenniken spends a lot of her time talking to college students about poetry. She often asks whether they know anything about Hanford. Few ever do.

“I think it’s really ironic that by not telling our story that we’re not learning from it,” Flenniken says. “For me the moral of the story is we need to be open about what we do and we don’t keep secrets.”

Flenniken says writing poems about Richland’s past secrets makes her feel like a bit of a traitor in her hometown. But she wants everyone to know the story of Hanford.