The annual festival brings together local community with canoe races, storytelling and a celebration of Native tradition. This year, the festival comes to Coupeville this Saturday (May 10).

Jim Hillaire wandered past the announcer stand at the Penn Cove Water Festival in the nick of time. The festival’s centerpiece canoe races were about to start, and the event was short-staffed in one critical area.

“Just by accident I was walking by, and the emcee they had scheduled didn’t show,” says Hillaire, 78 and a devoted paddler. So Jim rose to the occasion, emceeing the race.

That was twenty years ago. “I’ve been doing it ever since,” he says.

Those canoe races, with paddlecraft of multiple lengths gliding past Coupeville’s waterfront on a three-mile competitive course, punctuate a community celebration meant to reinforce the Whidbey Island community’s bond with the bay. They were a linchpin from the time the festival began in 1930 and remain so now, since the town revived its annual celebration in 1992, after fifty years on hiatus.

Then called the Coupeville Festival, the gathering was launched as an overture for tourism — although Whidbey was isolated, with no bridges and only intermittent ferries — but persisted because it was embraced by locals. Nearby Coast Salish Indian communities, their history entwined with coastal fishing and boating, entered the affiliated canoe races. The event became a yearly interface between tribal and non-tribal islanders.

World War II put paid to the festival, as it did for many other community gatherings across the country — temporarily or otherwise. In Coupeville’s case, the demise looked permanent. Revivals of the water festival in the 1970s fell short, and it wasn’t until the cause was taken up by Island County Beach Watchers, an environmental association formed through Washington State University’s extension programs, that canoe races once again became a yearly sight on Penn Cove. 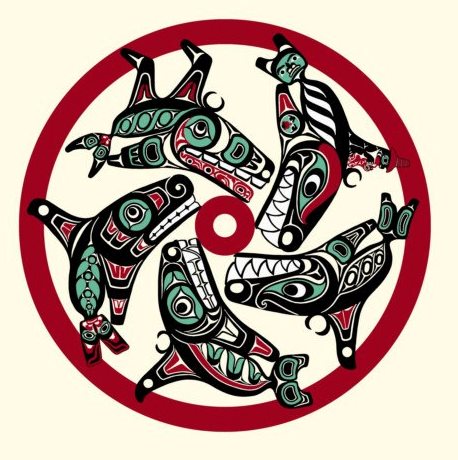 Relaunching the festival dovetailed with the Beach Watchers’ mission: To draw attention to the health of Puget Sound waters from those who use them recreationally. The group was newly founded, organizing informational outreaches and wetlands tours, and the festival represented a chance to combine that education with a major spectator event.

“They worked really hard to get it restarted and vibrant and able to continue,” says Vicky Reyes, now president of the festival’s governing board. “They restarted in 1992, and they produced the festival for about twelve years.”

The event is a moveable feast, landing on a given Saturday in May when the tides appear most favorable for canoeing. From the three canoes that competed in 1930, the races have expanded to include entries from more than 20 coastal tribes, each with its own canoe club — internal association that foster the tribes’ historic boating practices.

“It’s a way to remember that the canoes and the sea were such a big part of (tribal) life and livelihood, as well as a way to encourage their youth to be active,” Reyes says.

The clubs field canoes in sizes ranging from small three-man craft to large “journey” canoes to 11-paddler boats, and contestants as young as 12 are first on the water at Penn Cove.

Dedicated paddlers may train all year, and enroll in contests as far away as Hawaii, Hillaire says. Coupeville offers the area’s earliest such competition, at the start of favorable canoeing weather, and the season may run through September.

“It’s a friendly competition,” Hillaire says. “Everybody knows each other, and they all travel the same circuit.”

Back on land, the festival organizers celebrated each year’s event with a design from Tsimshian artist Roger Purdue. He produced his first donated artwork for the 1993 festival, incorporating Native iconography and images of Penn Cove aquatic life. The distinctive work from Purdue, who died this year, will persist into the future thanks to his foresight, Reyes says.

“He, I think, was aware of his demise, and gifted us last year with fifteen additional designs that we would be able to use for each future festival. We’re ready to go for fourteen more years.” 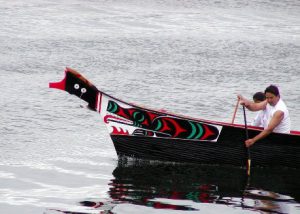 The festival earned a Humanities Washington grant this year to finance its more landlocked entertainments. The noontime races will be bookended by live music and performance at Coupeville’s Front Street stage, within sight of the water. The grant-supported entertainment includes violinist and storyteller Swil Kanim, flutist Peter Ali, maritime musicians The Shifty Sailors, storyteller Lou LaBombard and the Tsimshian Haayuuk Dancers.

Swil Kanim, a Lummi entertainer based in Bellingham, has been a major booster of the festival in recent years, creating a promotional video through his nonprofit foundation HonorWorks. He coordinated a Kickstarter campaign to finance the festival entertainment in 2012, when the event’s cash flow looked dicey.

The money diminished, in part, because the people who rejuvenated the event in 1992 were growing older and short on help. The Penn Cove Water Festival had moved out of the Beach Watchers’ care in 2004 and spun off into a nonprofit agency all its own, but by 2012 it needed fresh blood. Reyes, a recent transplant from Detroit, was among those who stepped up. She means to keep the Penn Cove legacy paddling on.

“I was familiar with Midwest to East Coast Native culture,” she says, “but I had no concept of the Pacific Northwest culture, which is just amazing and beautiful.”