Podcast Therapy for the Struggling (and Not-So-Struggling) Writer

Bestselling author Jess Walter discusses “A Tiny Sense of Accomplishment,” his podcast with Sherman Alexie on the pleasures and perils of putting words on a page. 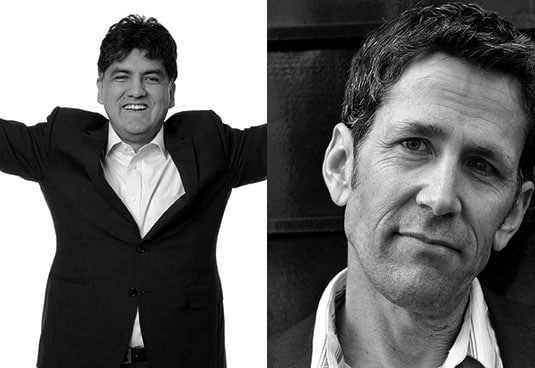 “Writing a book is a horrible, exhausting struggle, like a long bout of some painful illness. One would never undertake such a thing if one were not driven on by some demon whom one can neither resist nor understand.”
—George Orwell

If Orwell were alive and didn’t consider podcasts too dystopian, he might have taken some comfort in A Tiny Sense of Accomplishment, a show featuring Spokane-based novelist Jess Walter and fellow author Sherman Alexie. Since its launch in 2014, the two have created a welcoming place online for working and aspiring wordsmiths. Through the show, which is produced by American Public Media, the acclaimed writers use their longtime friendship to get at the nuts and bolts of the craft.

“For most writers, I think just hearing that someone else struggles with things sometimes is freeing,” Walter says. “There are so many times you feel like you’re not doing it right — and sometimes it’s good to know that the struggle is part of doing it right.”

Both men have other irons in the fire, of course. Walter, author of six novels including the most recent Beautiful Ruins (2012) and the short story collection We Live In Water (2013), recently learned he’ll have one of his works included in the prestigious Best American Short Stories collection for 2015, publishing in October. “Mr. Voice,” about a fractured family changing shape as a local radio personality marries into it, is Walter’s second tale to appear in Best American Short Stories. His first, “Anything Helps,” originally saw print in McSweeney’s and was selected for the 2012 anthology.

Walter’s on tap to read new work Oct. 23 at Bedtime Stories Spokane, Humanities Washington’s annual fundraiser, alongside Kris Dinnison, Sam Ligon, and Sharma Shields. Meanwhile, A Tiny Sense of Accomplishment commenced its second season in August, and Walter and Alexie bring the podcast to Bumbershoot in September, with acclaimed musician Neko Case as special guest. That gives listeners another year at least of hearing the tricks, travails, and dirty jokes of two accomplished workers in the trade.

Humanities Washington: How did the podcast get started?

Jess Walter: I think Sherman was approached first and thought it would be fun to do it with somebody — and since we’ve been friends for so long, they thought of me. I’ve been on quite a few APM shows, so they knew me, and it was quite a natural fit. They had us tape a few to see if it would work, and those first few we taped sort of became the show. Whenever Sherman and I have conversations, we spend a whole day. Yesterday we spent all day making up novels based on the Boy Scouts, like To Have and To Have Knot, with a K, and Tenderfoot Is the Night. Today we’ve been doing that with ’90s hip hop albums. The kind of stuff we just do texting and emailing each other back and forth, we just kind of thought, let’s do that as podcast. It’s a great job — I get to talk for hours with my friend.

On the show, the two of you discuss your individual work. Talking about a story in progress can be constructive, but can you talk a story to death?

I think that’s been a fear for both of us, and we’ve gotten away from reading so much work in progress on the show, only because we did have some things … I don’t know that they die so much as that when we read them, it felt published, in a way. I found a couple of times I would think, “I don’t need to finish that, Sherman already said it was good,” and vice versa. You can let it out when it’s still half formed. I’m not entirely sure why, but some pieces that we read left us both sort of flat.

Do you feel like you’ve learned new lessons about writing from doing the show?

Oh, definitely. What is that they call therapy — “the talking cure?” I think it’s interesting hearing Sherman talk. We approach writing in different ways. His most natural form … well, he’s so great at every form, but he would say his most natural form is the poem or the short story, and I think of myself most naturally as a novelist. I’m always stunned at how naturally poetically he thinks. He thinks in poem form, often, and he’s so attuned to rhyme. Just sharing all that headspace with a writer whose rhythms and practices are so much different than yours. I’ve learned from Sherman since we were in our twenties, watching the way he’s dealt with anything from fame to Hollywood to just the disappointments that come with writing.

Is there a different approach or mindset to structuring and writing a short story, compared to writing a novel?

I don’t think there are so many differences in writing it. I think I grew up as a novel reader, so when you get a sort of platonic ideal of the literary work you’re trying to create. If you grew up with the short fiction of Alice Munro and Raymond Carver as the ideal of the literary world, that would be what you set out for write. I love both those writers—I think I’ve actually grown more into a short story writer over the years, because of writers like Mary Gaitskill, or James Joyce’s Dubliners — these collections of stories that are so good you want to try to emulate them. So I think it’s more about emulating work that you admire and aspire toward, rather than there being some real difference in the writing. Obviously, the big difference is the idea of commitment. I sometimes make a joke that writing a short story is like going on a date and writing a novel is like getting married — the amount of time and commitment you’ll spend on those things. And writing a screenplay is like a one-night stand.

Has a short story of yours ever escaped its bounds and become something bigger?

Some pieces of Beautiful Ruins I worked on a little bit as short stories — but even though they were short stories, they were always connected to the larger work. I sort of thought the title story of We Live In Water would be a novel at one point, because I loved the world so much, but I never really went back to it. There’s another story of mine that ran in Harper’s last year called “To the Corner,” and that features characters from a novel I’m working on. I haven’t yet decided if that’ll appear in the novel or not. As far as working in the other direction — I don’t even really admit to myself that I’m working on a novel until I’m a hundred pages into it.