Children at the Raphael Weill Public School in San Francisco in 1942 recite the pledge of allegiance, 1942. Photo by Dorothea Lange, via Wikimedia Commons. Back To All Blog Posts

As an immigrant, the civic lessons and shared American culture taught in school made me feel at home. Now, forces on both the left and right are pushing back against what I learned.

I’m an immigrant from India, and I’m an American. When I meet you on the street, I hope you see in front of you another American, just like you.

Growing up in the East Bay suburbs of San Francisco, I went to public schools with native-born and immigrant children from diverse backgrounds. In school, we learned about American history and culture. We were all introduced to American traditions and holidays. We carved pumpkins on Halloween, sang carols during the Christmas season, and exchanged Valentine’s Day cards in spring. I learned that I should wear green on St. Patrick’s Day or face the consequences! Public schools brought us together and made me feel part of the nation.

For an immigrant like me, being welcomed into America’s common life allowed me to be at home in my new country. As we have become more divided, this common life has fractured. I don’t feel at home anymore. The same is true for millions of Americans. As the Black Lives Matter protests made clear, Black Americans continue to face discrimination and structural inequality. The spread of anti-immigrant rhetoric has made many immigrants, especially nonwhite immigrants like me, fearful and anxious. Even white Americans, confronting demographic and cultural change, are uncertain about their place in the nation.

These experiences have transformed our politics. From the right, Donald Trump and his partisan allies have enabled white nationalists to come out into the open. They have deployed racist and xenophobic rhetoric to appeal to voters. The former president fomented hatred and violence, never more so than on January 6 when he encouraged his followers to invade the Capitol, a building dedicated to the sovereignty of the American people. Too many on today’s right, in the words of poet Amanda Gorman, “would shatter our nation rather than share it.”

There is no equivalent on today’s left to the lies and violence unleashed by the former president and his defenders. Yet, in response to our country’s history of racism, many on the left have embraced a constricted vision of the nation similar to Trump’s. They argue that the essence of America’s history and culture is “white,” and thus we must reject much of who we are. We see this in, for example, the San Francisco school board’s recent decision—which, for now, is on hold—to remove the names of George Washington and Abraham Lincoln from their buildings, as if Washington and Lincoln speak only to white Americans rather than to all Americans.

If we can’t share Washington and Lincoln, it’s hard to see how we’re going to find a way to share America. We can recognize Washington’s contributions to our country’s founding while acknowledging that he participated in and benefited from racial slavery. We can also recognize the Black activists and their allies who made the country Washington helped establish more democratic and just, often in the face of violent resistance. As Americans, this is all part of our past, and thus part of all of us.

If there is one institution that we depend upon to bring us together, it is the public schools. The civic function of schooling can be divided into two goals. The first is what we traditionally think of as civic education: ensuring that all young people are provided the knowledge, skills, and critical thinking abilities to be effective participants in our democracy. Washington State’s recent requirement that all high school students take a stand-alone civics course is a welcome contribution to this aspect of civic education.

The second civic function of schooling is about socializing young people into the life of our nation—its ideals, culture, and rituals—and encouraging patriotism. In a diverse country like ours, students must learn to live with and respect people different from themselves, but it essential that students also learn to see beyond their differences to their common Americanness.

Today, it’s not clear that we are able to, or even want to, see beyond our differences. It is as if we have become so diverse that we have convinced ourselves that we cannot be a people. Many on the right, especially conservative Christians, want to opt out of public schools that they believe no longer represent their values. On the left, many educators and activists argue that because every group has its own culture and history it’s racist for schools to try to forge a common American identity.

The challenge is that democracies depend on shared culture. If we were brains in a vat, maybe we could all agree to get along, but for real human beings, governed by emotion as much as by reason, society is held together by culture, from big things like celebrating holidays or reading canonical literature, to mundane things like how we greet each other on the streets, the games we play, the shows we watch, or the food we eat. I grew up loving my mother’s home-cooked Indian food. I also learned to love American food—hamburgers and hot dogs, tacos and pizza, clam chowder and chili. And how could I resist the allure of Thousand Island dressing?

It is through these shared things that we sustain ourselves as a political community. It is through culture that we can see each other as fellow Americans. That’s one reason why I believe deeply that we need to revitalize the public schools’ commitment to integration. It will be hard, especially in a country as polarized as ours. But it has always been hard.

We need to agree that public schools are places where we come together, not where we come apart. This means challenging segregation. Sadly, public schools are more segregated today than when I was growing up. As federal oversight of school integration waned since the early 1990s, the number of racially segregated schools increased across the nation.

When I was growing up, my teachers took seriously the integrative function of schools. I am so grateful that they did. They respected my Indian background, but they did not treat me as a brown-skinned outsider.

According to a report by the Civil Rights Project at UCLA, the rate of Black children attending white-majority schools in the South increased to 43.5% by 1988, but, following the end of court-mandated desegregation, declined to 23.2% by 2011. Despite these setbacks, the report’s authors point out that, for Black students, the South remains more integrated than other parts of the country. Here in the West, the number of Latino students attending segregated schools increased dramatically since the 1960s. As a result, in America today, white students are the least likely to attend public school with children from other racial groups.

We need public policies to reverse these trends. This means rejecting the conservative effort to expand school choice and voucher programs. But that it not enough. We must also challenge school and district boundary lines that separate us racially, ethnically, and economically. We should support housing policies that encourage mixed-income and racially integrated neighborhoods.

We must also resist efforts to divide our children based on their backgrounds, whether those efforts come from the right or left. While many school choice advocates on the right argue that parents should choose schools that reflect their pre-existing family values, many educators on the left proclaim that public schools should reinforce students’ pre-existing ethnic and racial identities. But what about American values and culture? When I was growing up, my teachers took seriously the integrative function of schools. I am so grateful that they did. They respected my Indian background, but they did not treat me as a brown-skinned outsider. Instead, they were inclusive. American history and literature in all their diversity and complexity belonged to me as much as they belonged to any native-born kid. American holidays were mine to celebrate. My teachers respected me enough to share America with me.

A segregated curriculum and segregated institutions threaten our democracy by keeping us divided. They exacerbate existing inequalities and make it harder for us to find the common ground we need to seek greater equality. I could become American in part because the public schools encouraged me to do so. I seek that American Dream at a time when many on the right and left have abandoned it. Our public schools must be able to perform their two essential civic functions: to provide an education that fosters critical thinking citizens and to socialize the next generation of Americans. They go hand in hand.

I think there are lots more Americans like me who still want to believe that our story is not finished, that a flawed but beloved nation can be made more perfect. This is not a naïve position. I know that America has relied on law, legal and extralegal violence, and even terror, to maintain its racist order, and still does. For much of the 20th century, South Asians like me were not allowed to become citizens because we were not considered white. In my current home of Bellingham, in the 1907 “Hindu” riots, white workers violently drove South Asian migrants out of town. I do not pretend that white Americans always wanted people like me in their country. They did not.

But, in 1965, in the wake of the civil rights movement’s call for racial equality and justice, America opened itself up to migrants from around the world. Americans realized that any person could become American. Today, it’s unclear what will become of that aspiration. 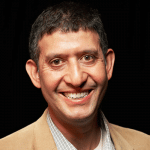 Johann N. Neem is author of the book Democracy’s Schools: The Rise of Public Education in America. He teaches history at Western Washington University. He explored his experiences as an immigrant in today’s divided America in his essay, “Unbecoming American,” which appeared in the Hedgehog Review.