The Northwest author talks about her work in many different media, from visual art to theater to opera. Brown will read at Bedtime Stories in Seattle Oct. 4.

Known primarily as a writer, and honored for her novels and stories with prizes including the Lambda Literary Award, the Stranger Genius Award and the Washington Book Award, the Seattle-based Brown has long dabbled in collage, curation, and remixings of other media. That pastime that took on a life of its own in 2012 after curator Yoko Ott and Frye Art Museum director Jo-Anne Birnie-Danzker asked her, initially, to write a piece for the multi-artist exhibit Moment/Magnitude, which closed in January 2013.

“They walked into my studio, and my studio’s surrounded with stained glass, as well as little collages and paintings that I’ve done. And Yoko and Jo-Anne were like, ‘Okay, you have to bring your visual art to the Frye too.’ I said, ‘But I’m not a visual artist!’ And they said, ‘Yes, you are.'”

Brown’s writing career launched publicly with the short-story collection The Evolution of Darkness in 1984. This and subsequent works, like The Terrible Girls (1992) and Annie Oakley’s Girl (1993), announced her as a writer not afraid of exploring the horror and joy of love. The end of a loved one’s life figures heavily in The Gifts of the Body (1994), a novel composed of vignettes involving a caretaker for patients fatally ill with AIDS, and Excerpts From a Family Medical Dictionary (2003), an account of Brown’s own vigil for her dying mother.

Not content between standard book covers, Brown has built a career as an active critic, teacher and collaborator with other artists. She wrote essays on art for The Stranger, which recognized her body of work with its Genius Award in 2005. That same year, she wrote the libretto for the dance opera The Onion Twins and debuted as a playwright with The Toaster. She teamed with Perry Lorenzo in a series of public talks for the Seattle Opera, and developed an art book, Woman In Ill-Fitting Wig, with painter Nancy Kiefer.

But always there’s the writing: Brown’s latest essay collection is American Romances, and she’ll unveil a new work at Humanities Washington’s Bedtime Stories celebration Oct. 4 in Seattle. Brown was among the first writers to create and premiere work for Bedtime Stories when it launched in 1999; her contribution is collected in the anthology Night Lights, alongside those of Tom Robbins, Tess Gallagher, August Wilson and others.

Humanities Washington: There’s a kind of encircling rhythm in your writing from time to time, where the construction seems to say more than the words inside it. What’s your key to writing evocatively? 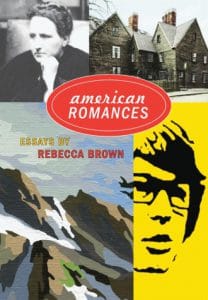 Rebecca Brown: It’s partly about exploring the sentence and exploring this interior roundabout, and so I’m very, very, very aware of style. I’m one of those prose writers that literally counts syllables in my work the way poets do, and I’m very conscious of where I put my commas and where I put my ands, to repeat patterns of thinking. Gertrude Stein insisted that what other people called repetition in her work was in fact insistence. So there’s a real consciousness about having a style that will insist upon itself, in order to evoke a feeling in a reader.

HW: You’ve written in traditional fiction forms, but also collaborated with choreographers and painters. Did you have to adapt your writing methods to work in other media, to make your words interact with image and sound?

Brown: Writing just on my own, for myself, is very different than working with someone else. But I also have to say that, within that, I do a lot of writing for myself, and I also do a lot of writing for journalism and for anthologies. I’m collaborating with an editor to move toward an idea that he or she has, which would be very different from writing for my own self on an impulse that wells up within me. But certainly, when I work with painters or musicians or dancers, I’m learning someone else’s language, and learning more about their art form. For me, so much of art making is about communication and community, so to make art with another person has tremendous pleasures. I have developed very fond friendships with many former collaborators. I have yet to experience working with an artistic collaborator where we didn’t like each other, and I dread the day that happens. I think I’d find that really hard to do, because so much of it is the joy of creating something new together that neither of us might have made independently.

HW: You’ve written at length about opera. When you were doing analytic talks for the Seattle Opera, what was your favorite opera to dissect?

Night Lights, a collection of short stories read at Bedtime Stories galas over the years, includes Brown’s “The Evolution of Darkness.”

Brown: I’m a fan, and my take on opera was very much to look at it through the lens of literary and pop culture and sort of national history, rather than a sort of musical history thing. A favorite was Verdi’s Macbeth, because then I could talk about Shakespeare and talk about Scotland and the British Isles, and talk about relationships of nations as settings for literary art. … So many opera plots are completely ridiculous, so as a writer of narrative, I’m just kind of tickled with the things they can get away with. But I think the thing that really appeals to me with opera is the grandness of the spectacle, and the fact it’s sort of multivalent storytelling — characters and plots and words, but also this sort of undefinable elements of the sweeping power of music. I think the thing that appeals to me about opera is the thing that makes it different.

HW: What about the Frye Art Museum Moment/Magnitude exhibit? What were you asked to do, and how did you fulfill it?

Brown: I sort of created a loose narrative called God Mother Country and Rock n Roll that combines a bunch of my objects that I’ve collected and altered books that I’ve made, and ordered them into a sort of vague personal narrative. It’s like a large cabinet of curios that sort of end up being autobiographical. … Basically, I’ve always been a junk collector and a tinkerer, and many years ago, like in the mid-’90s, I picked up a bunch of old musty books that were thrown away. I literally picked them up from a junkpile because the titles of them were funny, and I started coloring and collaging in on the pages.

My partner and I made a joke book for a friend — it had a Martha Stewart catalog with pictures of people watching TV and doing barbecues, and we gave it to these people as a housewarming present. Or taking some very midlist book from a closeted gay person and inserting gay text into it, and replacing that back into a bookstore. But I continued to do it in a less silly fashion. And take these books, paint over the pages, pulling out words that only that said something relevant to the story that I wanted to make.

For instance, I did this to a 1930s novel, The Mortal Storm, and it became The Mortals. I turned it from a story of people fighting World War II Nazis into a story of both of my parents’ deaths. The moral being: You can find your own story in anything. … Oddly enough, (these pieces of art are) finding their way out of my studio now. Being an author on your own, there’s a kind of loneliness to it — but working from a preexisting texts, there’s always a way to bounce ideas off someone.

HW: In November, you’ll teach a writing intensive at Centrum in Port Townsend. Teaching writing isn’t the easiest task in the world, because there’s a lot of art to it and a limited amount of science. What’s your approach?

Brown: If someone shows up in my class, I try to meet them where they are and work with what they bring — and a lot of what I do is try to disabuse people of images they have of what a writer is. Often they’re trying to write sort of highfalutin, something they think sounds like a writer, without realizing the writers who really move us are the ones who sound like themselves. They’re writing for themselves, not trying to imitate something else. What do you really want to do and say on the page? And that’s more interior work, and it takes a much longer time, I think. But I also have to say, many students come in and just in terms of basic grammar and structure — that’s not being taught in a lot of places anymore. I emphasize these things are actually important, not just to the story we tell, but how we tell it. It goes from this sort of amorphous psychological thing to this much more nuts-and-bolts thing.