The author of “Drift and Swerve” on who, what, when, and where he reads, and how the iTunes terms and conditions is part of an under-appreciated genre. 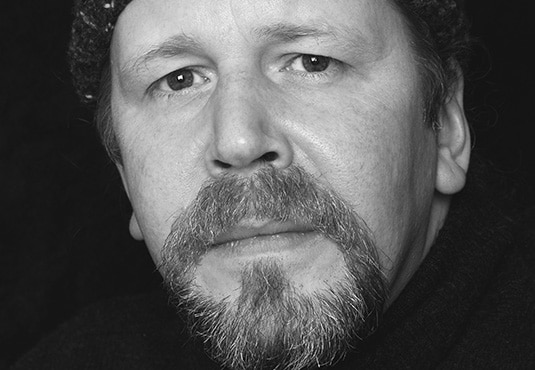 Reading Habits is a recurring series that asks authors, artists, community leaders, and others about their lives as readers.

Samuel Ligon is the author of the short story collection Drift and Swerve, and a novel, Safe in Heaven Dead. He is also the editor of the journal Willow Springs, and teaches at Eastern Washington University in Spokane. His new book, Among the Dead and Dreaming, is forthcoming in April 2016.

Ligon will be presenting an original short story during Humanities Washington’s upcoming Bedtime Stories fundraiser in Spokane on October 23.

It sounds pretentious and idiotic, but I’ve been in a Shakespeare reading group for the last couple years and keep getting blown away by those plays. So I’m going to say either Shakespeare or Elmore Leonard.

Most books I love I’ve read more than once. So there are a lot. Here are five I’ve read more than three times: Cloud Atlas by David Mitchell, The Known World by Edward P. Jones, Reasons to Live by Amy Hempel, The Sound and the Fury by William Faulkner, and Housekeeping by Marilynne Robinson.

In heavy traffic, while driving.

I prefer books to screens. I just seem to be able to read deeper and longer on the page.

The Stranger by Camus. I was 15 and thought it was really cool that the narrator was that disaffected.

You become the librarian for the entire world. As part of your newfound powers, you get to require everyone on earth to read one book. Which one, and why?

A movie that was better than the book.

A classic you think shouldn’t be considered a classic.

Anything by James Fennimore Cooper

A book you think should be considered a classic, but isn’t.

I don’t know if Fools Crow is considered a classic or not. But it doesn’t seem that enough people know that book. And it’s incredible.

Where you buy most of your books.

Every online policy, term, or condition we say we’ve read and agree to. No one has ever read or appreciated any of the work in that genre.

I think I read Into Thin Air straight through on a day of long and delayed flights. Not sure how many hours. Or maybe I hit a record the ten thousandth time I read The Runaway Bunny to my kids.