When it comes to race, what is Seattle doing right, and what needs to change? Join us for our next Think & Drink event Nov. 10, “Seattle Skin: Being Black in a Liberal City,” at Greenwood’s Naked City Brewery and Taphouse. 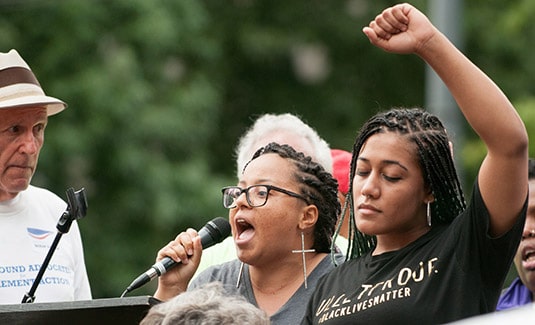 This past August, presidential candidate Bernie Sanders was scheduled to speak in front of a large crowd of supporters in Seattle. The speech, however, was interrupted and subsequently cancelled when Black Lives Matter activists took the stage and spoke to the crowd about the state of racial equality in the city.

“I was going to tell Bernie how racist this city is, filled with its progressives, but you did it for me,” stated one of the movement’s protesters, Marissa Johnson, after several audience members booed.

The activists’ unexpected appearance marks another in a string of public demonstrations by the group, and their actions drew a mix of praise, criticism, and confusion. Why would the Black Lives Matter movement target Bernie Sanders, a progressive who seems aligned with liberal ideals about civil rights? And why in a left-leaning city such as Seattle?

However, what might have led Johnson and the activists to so sharply criticize Seattle’s culture? Is the activists’ attitude and experience a common one among minorities in Seattle?

Join us at Naked City Brewery and Taphouse on November 10 for our next Think & Drink event, “Seattle Skin: Being Black in a Liberal City,” to explore the black experience in Seattle, and what the city and its culture are doing right when it comes to civil rights and equality—and what needs to be changed.

Seattle is composed of a roughly 33% minority population, making it one of the whitest cities in the country. Given these numbers, is it possible that Seattle’s homogeneity has hindered progressives’ ability to address racial inequalities?

The activists’ public disavowal of Seattle’s “progressive mystique,” and statements to a liberal audience that the city has been enveloped in a narrative of false enlightenment, has sparked a more urgent conversation about race in Seattle. “Seattle Skin” will provide a casual environment with which to continue this conversation, cross-reference and reexamine Seattle’s perceived progressivism with reality, and explore the black experience in Seattle—an experience that too often remains hidden from the view of its largely white population.

Speakers: Megan Ming Francis, assistant professor in the department of Political Science at the University of Washington and author of the award winning book, Civil Rights and the Making of the Modern American State; Eric Davis, sociology faculty at Bellevue College and member of the UW Consulting Alliance; Eva Abram, public speaker and Humanities Washington Speakers Bureau member; and Charles Mudede, screenwriter, author, and editor at The Stranger. Moderated by Phyllis Fletcher, managing editor of Northwest News Network.

We recommend arriving early as this could be a full event. More details: humanities.org, or contact program director Zaki Hamid at zaki@humanities.org.