Sharma Shields on Writing About Monsters, Both Literal and Figurative

Shields, the author of Favorite Monster talks about mixing fantastic story elements into her fiction, her background working at the Spokane County Library, and more.

Sharma Shields wants something in her stories to stick with you after they’re done. That’s why the Spokane writer’s first book, the short fiction compendium Favorite Monster, specializes in depositing a little gem of dread at the close of each tale.

“I do think that stories have an afterlife, and a lot of my favorite stories stay with me because I find myself — even though the story has ended — I wonder what’s happening to the characters in this sort of imagined life I create for them,” Shields says. “I think of that when I’m writing.”

Shields’ monsters, human and otherwise, rise up from mundane corners to act out what’s best and worst in our natures. Her story collection, drawn from work previously published in venues like the Kenyon Review, Iowa Review, and online journals like Monkeybicycle and Memorious, places the phantasmagoric in close company with the everyday and asks the reader to sort out which aspect is real. The cycle of stories won the Autumn House Fiction Contest, leading to its publication in 2012. Last fall she recommended a playlist to accompany readings of her book.

As for her distinctive name, it has literary roots: Shields and her mother were both named Sharma after a character her grandmother encountered in a novel. The title of the book, unfortunately, is lost to time.

Humanities Washington: Assembling your short story collection, did you find your stories had connective themes? Maybe themes you didn’t intend?

Sharma Shields: I think initially when I was writing the collection, the major things that were kind of sticking out for me were guilt, loneliness — those were themes I was seeing kind of come up again and again as I was writing. I very intentionally wrote some stories about monsters: There’s the Sasquatch in one, and there’s a cyclops working in a PR firm in another, and Medusa makes an appearance.

I started realizing — and this was not my intention — that the monstrous was coming out not in the stories with the actual, literal monsters, but in the stories about people who were behaving inhumanely to another human being. Sometimes that’s a decision we make almost to protect ourselves, but the ramifications of making those sorts of inhumane decisions are something I worry about in life, and I worry about in my writing thematically too. When I finally thought of the title for my collection, I realized it worked for all of the stories, even the ones without monsters in them.

HW: Do you think having worked in libraries contributes to your own fiction? 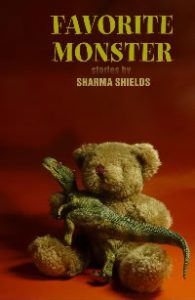 Shields: Definitely. I actually even set a chapter of the novel I just finished in a library. But then I deleted that chapter! The beautiful thing about working in libraries is you really realize that no one has the same literary taste, and that’s actually a very liberating thing to know. People would frequently ask me, when I worked on the reference desk, “I’m looking for a good book to read, what do you like?” Instead of, “My favorite book is this,” You learn to say, “Well, what’s the last book that you read?”

It was liberating to see all the types of authors that are out there, all the different qualities of books. It kind of helps a writer to be a little less perfectionist. I also think one of the major aspects of that job was the almost social work element to it, where you were working with some really disenfranchised portions of the population — and because it’s a public place, it’s open to people from all walks of life. I really appreciated it after having worked in a sales position before that, where I was working with wealthy people — I really appreciated the diversity. I think libraries are probably one of the coolest inventions of mankind. They do so much for the community, and it’s about so, so, so much more than books.

HW: For a long time, mainstream literary fiction seemed to turn up its nose at horror and the fantastical. Do you feel like that’s changing?

Shields: I’m not sure. I think of Gabriel García Márquez, who was definitely part of the literary canon when I was in college, or I think of Bruno Schulz, or Richard Brautigan. I think there’s always been a little bit of a genre-bending element in literature … even in, like, Edgar Allan Poe, who’s always been around. I think there will always be people who turn their nose up at it, who prefer realistic fiction, but I do feel so delighted when I come across something that seems to embrace the imaginative.

HW: What did you read as a young person that taught you fantastic story elements were okay?

Shields: I loved Greek mythology. I thought it was really cool to read as a kid, because the stories tended to have the very dark endings that a lot of things you read as a child don’t have. I saw a little bit of truth in some of that darkness that I thought I was maybe missing out on in some other literature. I think of writers like Roald Dahl — I read his stuff as a child, but then I returned to his adult fiction and short stories that he’s not as famous for, and some of those short pieces are really creepy. I think I read Shirley Jackson’s “The Lottery” when I was about twelve, and I’ve only recently read her novels, We Have Always Lived in the Castle and The Haunting of Hill House. I love the first one because it’s such an amazing character study of this elusive female narrator, and I love The Haunting of Hill House just because I think it’s scarier than any other book I’ve ever read.

HW: What are the capabilities of fantastical fiction that aren’t as easily found in straightforward fiction?

Shields: For me, I think when they’re done really well, (fantastical fiction works) just seem so fun and innovative. But I think they also really give the emotions in the piece a kind of hyperreality, in comparison to the fantastical elements of the piece. And I like that contrast that goes on between the two. If you look at, like, George Saunders’ story “Pastoralia,” or even “Sea Oak” — “Sea Oak” is a great example, because it has an aunt who comes back as a ghost, but the emotions in the story are so real. We can laugh and have fun with the imaginative elements of it, but the emotions in it are really poignant and become fully realized with all the crazy stuff that’s going on. I like that contrast.