She and Her and Them: Kris Dinnison on Writing about Teenage Relationships

The author of “You and Me and Him” on her meandering path toward being a “young adult” author. And what the “young adult” genre even means. 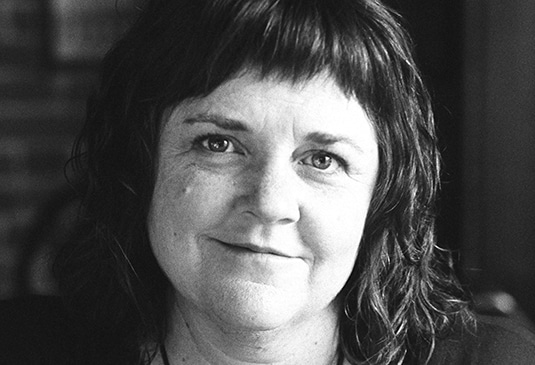 Kris Dinnison had multiple careers before her first novel, the three-way teenage love story You and Me and Him, which debuted in July. As a schoolteacher and librarian, she met a lot of kids like her book’s heroes Maggie, Nash, and Tom.

Then there’s her current life as a coffee shop owner, hosting book signings for fellow authors and managing one of those intersecting spaces — like Maggie’s record shop — where like minds meet, connect, bond, and sometimes fly apart again. A fixture in Spokane’s literary scene even before she began writing in earnest, Dinnison is among presenters of new fiction at this year’s Bedtime Stories gala on October 23, alongside fellow locals Sam Ligon, Sharma Shields, and Jess Walter.

You and Me and Him is a book with a soundtrack, in which characters obsess over music almost as much as they obsess over each other. Houghton Mifflin Harcourt is marketing the book as a new fixture in the burgeoning and influential Young Adult genre. Meanwhile, around her hometown, Dinnison is as well known for her cappuccino as for her prose.

“I spent this morning in our café making lattes for our regular customers, so a lot has not changed,” she says. “It’s a surreal experience to be on the other side of the signing table.”

Humanities Washington: You’ve been around the book and retail business for some time, so did you know what to expect upon your first publication?

Kris Dinnison: I think because I’ve been a bookseller and a librarian and a teacher, maybe I understand the business of publishing better than a lot of first time writers. But I’ll be honest — I didn’t really expect this. I never expected to get published. So to be in this position six years after I quit teaching seems a little bit miraculous, and sometimes impossible. Maybe it made me a little savvy about how to get the book out there once it had been published.

Music plays a heavy part in You and Me and Him. How important is music to you in the act of writing?

I can’t listen to music while I’m writing, not even classical music. I can’t do it when I’m reading either — I’m terrible that way. For me, at least in this book — and it’s the first book I’ve written, so I don’t know what role it will play in future books — but I when I was a teenager, music was so important to me, and it was important for a lot of reasons. One of the big reasons was that it gave voice to a lot of things that I wasn’t even sure about, and what I would find in the songs was a language for things I couldn’t express myself. When you would meet someone and start talking to them, part of the way you would learn if they were somebody you wanted to know was finding out what music they listened to. These are things that help us decode other people, in a way. You and Me and Him started as a line in a notebook that goes, “A girl who works in a record store.” That was the starting point for the book, so naturally, music was going to be a part of it. But I love working music in, and I think as long as I’ve got teenage protagonists, that will probably continue. I don’t know any teenagers who don’t listen to music.

You’ve been a schoolteacher and a librarian. How awesome is that for market research?

Certainly, working with teenagers for about fourteen years of my career, and with younger kids for the last four, helped me know them beyond my own teenage experience. I certainly saw a huge variety of kids and got to know their experiences and how they responded to things. But every individual teenager, just like every adult, has a different interest in reading. I would have kids whose favorite reading experience is Stephen King or whatever — the same thing a lot of my friends were reading when we were growing up, because there wasn’t really young adult fiction at that time, so we were reading whatever we could get our hands on. You have to sort of find those things that are going spark their interest. I have one friend still teaching at the alternative school I taught at — she gets all these students who are non-readers, and within six weeks, she has them sucked in. She puts books in their hands they just can’t put down. I remember teaching British literature when I was teaching at Mead High School, and some of that stuff that was in the curriculum, I remember thinking, “Okay, how am I going to make these kids believe these are things they ought to read?” But one of the reason they’re classics is you can find something in them that appeals to everyone’s experience.

Young Adult is aimed at readers of an impressionable age, so does it have responsibilities to those readers beyond just an entertaining story?

First, you should know that to some extent I think the idea of Young Adult revolves around a marketing decision more than a storytelling or a writing decision. Because really, we’re talking about “What shelf does this novel go on in a bookstore or a library?” And I can think of a lot of books where I think to myself, “Why is that a YA book instead of an adult book?” The Age of Miracles by Karen Thompson Walker, where the protagonist is twelve or thirteen, and the end of the world is coming — that was a huge literary fiction title. So why is that literary fiction instead of YA? I think it’s about which editor acquired it and where they wanted to put it. … I think, like any writer, that the responsibility I feel to readers is to tell the truest story that I know how to tell, and if I do that, then the readers that are meant to hear that story will find it. I don’t feel a responsibility in terms of teaching a lesson or giving any moral advice. I don’t think it should be didactic, if that’s what you’re asking. I also don’t think I should be protecting kids. I taught kids long enough to know there’s not much left to protect them from. I don’t have this idea that, well, they’re just kids, I should not say that word or put this sexual situation in. I’m making decisions about whether or not stuff like that should or shouldn’t go in the novel based on the story that I’m trying to tell.

Now that you’re on the YA shelf, do you want to stay there, or are there other styles you’d like to tackle?

Again, I’m so new to fiction, I don’t really have a great answer to that. I certainly don’t have any objection to being a YA writer, and if that’s where I end up for my whole career, I’ll feel very happy to be there. I do love that time in your life when there’s so much happening. That transition from childhood to adulthood is such a universal experience — there’s some really exciting things that can happen in terms of storytelling there. I like where I’m at, and I like the company I’m in.