Public historian Lorraine McConaghy talks about her book, New Land, North of the Columbia, and the aspects of Washington’s state history that make it such a fascinating place.

As the public historian for the Museum of History and Industry (MOHAI) in Seattle, Lorraine McConaghy has had the opportunity to dive deep into Washington state’s history. She has researched many of MOHAI’s long-standing exhibits, and, with its current move to the historic Naval Reserve Building in South Lake Union neighborhood, McConaghy has been given the huge task of curating a new core exhibit there.

“The sweep of this history is both daunting and exhilarating. I’ve had to try to understand nearly two centuries of central Puget Sound history,” says McConaghy. The museum will open in its new location this winter, featuring new exhibits about the rich history of the Puget Sound. 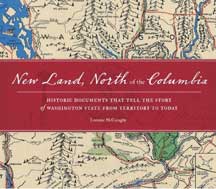 The kind of deep research that is involved in curating a museum exhibit is not new to McConaghy, who earned her doctorate from the University of Washington, where she currently teaches in the museum studies program. She has also researched and written several books on topics related to Pacific Northwest history. In her latest book, New Land, North of the Columbia

, McConaghy explores Washington state history by sharing more than 400 documents from dozens of archives across the state. From letters and telegrams to posters and product containers, these artifacts bring the history of our state to life.

While not a native Washingtonian, McConaghy first moved to Seattle in 1969 and has lived here continuously since 1981. She offered two different lectures on Washington history as a member of the Humanities Washington Speaker’s Bureau for 2010-12 – The Civil War in Washington Territory and New Land, North of the Columbia, the latter of which wraps up with presentations throughout the San Juan Islands Aug. 24-26. McConaghy will return to Speakers Bureau with a new presentation for 2012-14 (details to be announced soon).

Humanities Washington had a chance to talk with McConaghy via email about her interest in history and some of the interesting artifacts she came across during her research for New Land, North of the Columbia.

Humanities Washington: How did you first become interested in history?

Lorraine McConaghy: I first became interested in history because of a childhood interest in language. In church, our minister often used as his text for a sermon the Bible’s original Hebrew or Aramaic, and my Catholic friends told me that Mass was said in Latin – so I went to their church to hear it. At home, members of the family spoke German and French, and what delighted me was “finding” a word in American English that I could also recognize in another language. So it started with words (and I still find the Pacific Northwest’s Chinook Trading Jargon a prime research interest because of the languages and people that were merged in it, and how they changed over time). But after languages, my historical interest was artifacts, and I did a lot of volunteering in historical societies assisting the registrar, the education curator and the archivist at various museums. Going on to graduate school was a necessary set of next steps, and working as public historian at MOHAI has been my delight.

HW: What fascinates you most about the history of Washington territory and state?

McConaghy: There’s a lot, but mostly, I am delighted by the fantastic level of documentation, and its continuity. Native oral tradition carries us back to grand natural events and to the long human history of this place, and next we have the published and unpublished record made by explorers, missionaries and fur traders. Then the documentation just explodes, with coverage of the far Northwest in newspapers far and near, in business records of the Hudson’s Bay Company, in governmental records, and then in personal archives, from diaries and correspondence to song lyrics, religious documents, photos, poetry, art, recipes, reminiscences and so much more. The distinctly Northwest tang to this documentation for newcomers – for non-Native people – is that this place was a destination for so many, rather than a place of transit. Whether traveling from England, Japan or New York state, and whether in 1850, 1950 or 2010, such a large percentage of migrants came here intentionally, and to stay. This is the “coast” to “split for”; it’s where you “see the elephant.”

HW: What was the most interesting piece of archival material that you found during your research for New Land? 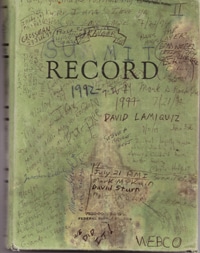 McConaghy: The most dramatic and compelling was the Mount Rainier Summit Book. The artifact itself had stayed on the mountain’s peak, at 14,000’, for two years, and you could really tell. The cover was faded unevenly, and the book itself was cupped from many wettings and dryings, freezings and thawings. And the handwritten notes inside by successful summiting climbers were just wonderful to me – people at the end of their tether physically who were also at the top of the world.

But the most interesting document is what I’d call the Tobin map, in shorthand. It’s the most interesting because it involves language and because I don’t entirely understand it. It’s a map of the south sound, hand-drawn in pencil and not easy to make out. As near as we can tell – we being me and the archivists who helped me – it is the record of an interview in the early 1920s of the last surviving Lushootseed translator from the Medicine Creek treaty council, in which he told his interviewer the names and uses of Native sites on the mainland, the islands and the sound itself. To me, it is clear evidence of the Native geography of this place, and a language bridge from the 20th century back to the 19th and before.

HW: Why is it so important that we preserve our state’s history, or preserve historical documents in general?

McConaghy: In George Orwell’s novels 1984 and Animal Farm, archivists are vital tools to the totalitarian regimes because they can fabricate, destroy or alter documents – and those documents are reality. At MOHAI, we explore history so that the present makes sense, so that our visitors can make better choices for the future. A colleague of mine from another country once smiled wryly at hearing me say that, and remarked, “In my country, we fake a history in our museums so that the present is bearable, and we can control expectations of the future.” Yikes. If you don’t have the primary documents, you don’t have the evidence. The past has created our understanding of itself by what has been saved and not saved; the present creates the future’s understanding of itself in the same way. How will we be known? If it is important – and I believe it is – that the present be understandable so that people realize they can make decisions and shape their future – well, they have to be given the tools for understanding that past. And that means archives.

HW: If someone were to be starting their own archival history project, what advice would you offer them?

McConaghy: Know what your topic is. Have as clear a set of research questions as possible, and be able to communicate them. Be flexible, and prepared to rethink your project as you discover unexpected material about your topic or fail to discover enough about a particular research question. Be patient and take your time. Have a system of organization of your material that works for you – it doesn’t have to be fancy, but you do have to believe in it and do it. Look everywhere – our archival legacy is widely (and thinly) spread on any topic I can think of. And, in the end, be able to ask yourself and to answer the question, “So what? What is the significance to others of what I’ve learned?”