Illustration: Richard Goettling. Back To All Blog Posts

What’s it like to travel the state discussing the evidence for and against the existence of the Pacific Northwest’s most iconic creature?

Let me start by saying that, when it comes to the subject of Sasquatch, I’m a fence sitter. I won’t say that there’s no such thing as this giant-sized hominid (or human-like being), because if someone found irrefutable proof of one tomorrow, I’d clearly be wrong.  On the other hand, I wouldn’t want to go to court with the evidence we’ve amassed so far. Truth be told, we don’t have much to confirm the Sasquatch’s existence—or, for that matter, to flat-out deny it.

So where to go from here? Well, for starters, I tell the people who come to hear me speak that we can all becoming skilled observers of nature, thus contributing scientifically credible data to aid in our understanding of this phenomenon. In other words, we can all learn to become better citizen scientists. 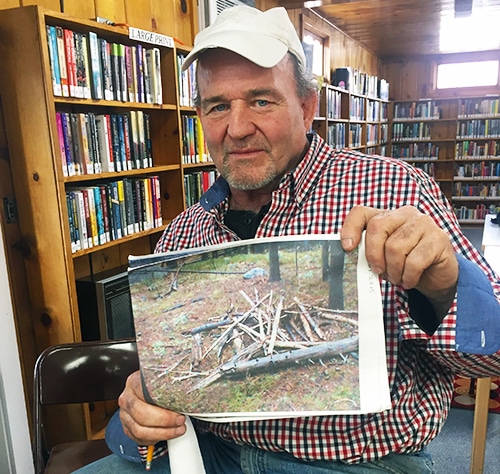 An attendee at Gordon’s Oroville talk holds a photograph he believes might be of a “Sasquatch bed.” Photo: David George Gordon.

What might that entail? During my programs, I talk about critical thinking and the basic tenets of the scientific method. I explain that absence of evidence is not necessarily evidence of an absence—in other words, just because we don’t have solid proof of something doesn’t mean it doesn’t exist. I also introduce the notion that extraordinary claims require extraordinary proof. “It’s one thing to say you saw a bright light in the sky,” I’ll point out, “and another to say what you saw was a UFO.”

Together, the audience and I explore what it would take to get scientists to formally recognize what so many people in Washington and throughout the Northwest are claiming to have seen: an eight- to ten-foot-tall creature covered with hair, possessing great strength, agility, and speed and that is also quite shy, leaving minimal evidence of its presence.

The single largest volume of pro-Sasquatch evidence is the cache of exceptionally large footprints scattered across Washington as well as in Oregon, California, and British Columbia. Often, when these footprints are found, they are preserved by people as plaster or cement casts. Now, a goodly percentage of these footprint casts can be ruled out as fakes. In all likelihood, they’ve been fabricated by someone with wooden cutouts strapped to their shoes, who went outdoors and tramped around.  However, some of the casts are not so easily dismissed. The footprints from which they’ve been taken show remarkable detail and a sophisticated understanding of how a foot flexes as it travels overland. Some even show the impressions of dermal ridges—minute, fingerprint-like whorls of the foot that would be all but impossible to replicate.

I’ve had people bring their footprint casts, some original, others highly-prized replicas of “famous” Sasquatch discoveries, to my talks. On one occasion, the show and tell included a set of knuckle prints, first seen by Sasquatch stalker Paul Freeman in eastern Washington’s Blue Mountains. At another one of my presentations, an audience member confided that, after years of collecting footprint casts from sites on the Olympic Peninsula, he’d literally run out of storage space in his basement, preventing him from stockpiling further evidence.

Eyewitness reports are the second most abundant form of evidence.  During my stint as on Humanities Washington’s Speakers Bureau, I’ve heard more than my share of these first-person narratives. Bear in mind that the majority of sightings are told by people with no obvious ulterior motives. They‘re not trying to land a contract for a best-selling book, nor are they scheming to become stars on network TV. Indeed, the exact opposite is true: by sharing details of their run-ins with the Wild Man of the Woods, these people may be inviting ridicule from their friends and neighbors. As such, when audience members speak of their close encounters, I listen closely, with respect and keen interest in the details of their experiences. 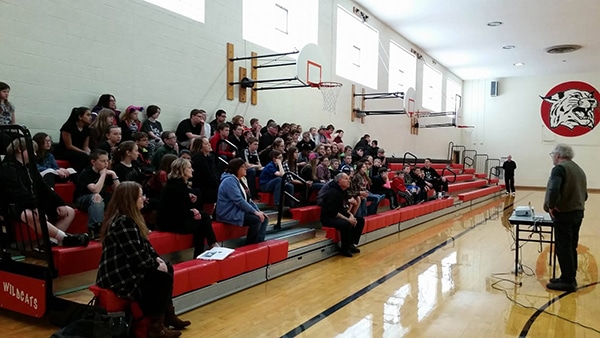 At my programs, I strive to create safe spaces for the people who’ve brought fresh data to share. Five or six people per program will come forward with their personal testimonials. I’ve heard from individuals who’ve been pelted by rocks thrown by unseen assailants. Others have told me of hearing unnerving ape-like howls or unaccountably loud thumping noises in the night. Still others have said they’ve felt a strong, spiritual connections with the Sasquatch before, during, or after they’d met one face-to-face. While some encounters have happened in recent times, in some instances the testimonials have taken the form of reminisces— remembrances of experiences that may have occurred many decades ago, when the teller was barely a teen.

Frankly, I don’t know what to make of all this. However, I do know one thing— that the burden of proof rests on all of us. The more sets of eyes and ears we can focus on the Sasquatch’s purported stomping grounds, the better the chances of finding valuable clues that, eventually, can be applied to solving the riddle of Sasquatch: Man-Ape or Myth?

As a member of Humanities Washington’s Speakers Bureau, David George Gordon is traveling the state presenting his free public talk, “Sasquatch: Man-Ape or Myth?” at venues around the state. Find an event near you.