Stories in Stone: Geologist Helps Us Discover History Hidden Around Us

What can the buildings around us say about local history? Geologist David B. Williams reveals secrets hidden in the stone all around us during a recent interview with Spark magazine.

When we walk into a modern building, we seldom think of the stone around us. Sometimes we barely think of it as stone at all. Geologist and author David B. Williams would like to change our way of seeing the materials of our everyday spaces.

“It’s something that we walk by every day, but to me, geology is part of our lives,” Williams says. “And building stone allows you to connect with that and realize that geologic stories and human stories are always intersecting.”

Williams carries out that mission as part of the Humanities Washington Speakers Bureau, carrying his eye for stone and structure to presentations statewide. His talk takes its title from his 2009 book Stories in Stone: Travels Through Urban Geology, a past nominee for the Washington Book Award. On the road, he refines its point to specific locales in Washington. 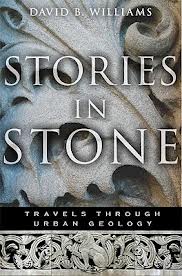 Stories in Stone, by David B. Williams

“The talk focuses on Seattle,” he says, “but wherever I go, I try to weave in what I can about the local building stone that’s used.”

In his career as a geology writer, Williams has looked at Utah’s White Rim Trail, the Southwest canyonlands and his own Seattle. He’s written numerous essays, and keeps readers up to date through his own blog. In observing how cities use stone, he’s seen the same cycle repeat itself many times.

“Most places initially start out using whatever’s locally available — then as the city becomes wealthier and/or fashion changes, they seek rock from all over the world,” he said. “Even though you might think, ‘Wow they’re shipping stone from India to Spokane, that seems a little ridiculous,’ they still do it. And every city does that — they all follow the same pattern.”

Williams next appears at a series of presentation June 21-22 in the Spokane area, and is available for future bookings.

What: Stories In Stone: Travels Through Urban Geology in Washington State, a Humanities Washington Speakers Bureau presentation by David B. Williams

Humanities Washington: What’s the oldest or most significant architectural stone in Seattle?

David B. Williams: There’s two ways to look at it. One is the buildings that have big fossils in them. They rebuilt part of the terminal area at SeaTac, and there’s a new food court in there. The walls have a German limestone, about 175 million years old, and you can find fossils five inches across in the building stone. There’s a building in downtown, the Seattle Exchange Building, built in 1929, and the base of it is Morton Gneiss — and that rock is 3.5 billion years old. It’s the oldest rock commonly used as building stone in the industry, and I would pretty much guarantee it’s the oldest rock any normal person would ever see in their life. And it’s beautiful. When you touch the stone, you’re reaching 80 percent back into Earth’s history. And to me, that’s a pretty neat thing.

HW: Is it possible to trace a city’s history by its building stones — this type of stone was used in this era, this type in another, and so on? 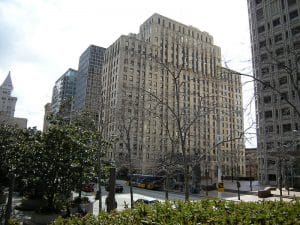 The Seattle Exchange Building was constructed using Morton Gneiss, a rock that’s 3.5 billion years old. “I would pretty much guarantee it’s the oldest rock any normal person would ever see in their life,” says Geologist David B. Williams. “When you touch the stone, you’re reaching 80 percent back into Earth’s history.”

Williams: Absolutely. For instance, Seattle starts out as a city built of wood, it burns to the ground in 1889, and they start rebuilding with whatever’s locally available. So all the older buildings in downtown Seattle are made of local rock. You can sort of see fashions change as certain stones become popular in the trade, and that change comes into Seattle in certain eras. As you get to the present, everything is sort of tossed out — even though in Seattle, when they have their big building boom in the ’80s, rock from Finland happened to be a very popular stone. I have no idea why … it may simply (have been) some really good marketing.

HW: What’s the most prevalent stone in Seattle buildings?

Williams: I would say granite, or some form of rock like granite. If you look at the old buildings, it’s sandstone, but since, say, the ’80s, when granite came back into the trade, that has been the stone of choice for big buildings. It’s easier to work with and it’s more resistant to erosion than sandstone or limestone.

HW: Eastern Washington is rich in basalt. Would that make a good material?

Eastern Washington is rich in basalt, like these formations in Douglas County. Williams says basalt can be a good building material, though it’s not ideal.

Williams: Basalt can make a good building material, and where it is the only stone, people have done a good job with it. If you go to Hawaii, they’ve done a nice job. It is often hard to work, and you have to get the right type of basalt. It’s not necessarily as good as granite or sandstone. I think it would be a second choice — unless it’s the only choice.

HW: What does Washington offer a geologist that’s unique?

Williams: When I graduated from college, I lived in southern Utah for almost a decade — probably the most geologically stunning part of the United States, with this incredible red rock. But when I talk to groups in Seattle, I always tell them the geology of Seattle alone is much more interesting than southern Utah. We’ve got three major fault zones. We’ve got volcanoes that can blow up. So for a geologist, Washington state is certainly more dynamic than most places. You could argue that’s not good, because everything I just mentioned was death and destruction, but it makes it interesting and exciting. It’s also very complicated.

The one thing we lack is a lot of great fossils. There are some sites with great fossils, but we don’t have a lot of good fossils in Washington state. In the sense of finding the stories of past life, there’s less of it here than in other places. For instance, we have no dinosaurs.