“They Don’t Want to Hear Pundits, They Want to Watch Rap!”: Eric Davis on Using Hip Hop to Connect Communities

As a youth, Eric Davis realized his approach to education wasn’t working—until he realized that rap could make a great teacher. 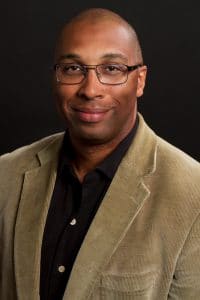 Trying to constellate media, music, race and individual experience presents a potentially overwhelming challenge. But Eric Davis has dedicated the last twenty years of his life to doing just that. Through a program called Rap 101, he unpacks the social and political messages in rap for groups ranging from church congregations to school library patrons. Few music forms have experienced the level of growth and change that rap has over the last two decades, but Davis grounds his talks in the experiences of the group in the room. “To be genuine, I have to give my cultural story, and I want the group to give theirs,” says Davis.

Davis recently joined the roster for Humanities Washington’s 2015-2016 Speakers Bureau. We spoke with Davis about his very first Rap 101 sessions, the music industry and what keeps him excited about his talks twenty years after they began.

Humanities Washington: You’ve been facilitating Rap 101 sessions for over 20 years. I’m presuming you were a rap fan before you started these sessions. Who were you listening to when you started? What inspired you to use rap as a discussion catalyst?

Eric Davis: The first Rap 101 session I hosted was in January 1991, when I was an RA at UCLA. At that point, I was an African American studies major with an emphasis in political science. One of my responsibilities was educational programming, but when I got my review, my mentor, Carolina Griffin, said she was disappointed in my offerings. I said, “I just don’t like the notion of educational programming. Who wants to hear some boring dude get up and speak? We do that all day.” She said, “Eric, think outside the box.” I walked out through [UCLA’s] Sproul Hall, and in the lobby, everyone was watching MTV Raps. I was like, “they don’t want to hear pundits, they want to watch rap!”

My dad was a jazz musician. He just passed away, but music’s always been the norm in my life. I grew up with Steely Dan and the Isley Brothers. At the time [of starting Rap 101], I was listening to Public Enemy, especially for the social commentary. I was very into Malcolm X and the Black Power movement. I was also working a Parks and Recreation job outside Compton, California. NWA had just come out with their first album, Straight Outta Compton. I asked a coworker, “What do you like about this gangster rap, this NWA stuff?” He said, “Eric, NWA’s just a flipside of Public Enemy.” Public Enemy had a song called “Black Steel in the Hour of Chaos,” and it had the same defiance as “Fuck Tha Police.”

If the organization is looking for a specific topic, like if I’m going into a library for a Black History Month presentation, I address that topic and try to diversify their understanding. I try and serve the group’s needs.

Beyond that, the educator in me wants to inspire people to see through the surface to the social justice issues. Hip hop is like any other music—it relates to everything. If a church says they’re not sure what they want, then there are plenty of songs that look at religion—songs that help them talk about how they can expand their service to their community. I want to be able to follow where the audience takes me.

What themes in rap and hip hop do you see as consistent from when you began these sessions? What’s changed?

I think there are some things that stay the same. I turn 46 in January, and when I tell [younger guys] I’ve been doing this since I was 21, they’re surprised. They think so much has changed, but if I play “Night of the Living Baseheads,” how much has changed? Have we gotten passed labeling certain people as the problem people of our society? Look at some of the early songs that I played regarding police brutality. You see the situation with Ferguson, and then you hear NWA say [the police] would “Rather stomp your head ‘til you’re dead with a steel-toed boot.” That was 20 years ago, and that’s still relevant.

We’ve come a long way, and we’ve seen come changes—if you look at the hopefulness of “Same Love,” that song would’ve been nonexistent in the early days in hip hop. Obviously, that’s by an Anglo-American person. I would’ve thought that we’d see more female artists. I get the sense that we haven’t made much progress since Queen Latifah and Moni Love.

What’s shifted for me, and this could be the old school dude being judgmental, is that before, whether in gangster, political, or just having-fun rap, you’d hear [people rapping] just for skill. My sense is that there are not as many people who are very highly skilled. Jay Z’s still out there, and so is Kanye, but it seems that you’ve got to be extreme in the sexual side of things. To speak in curse words has always been part of the deal, but it was always to a point. Now, that point seems less pronounced, or people aren’t picking up on it. How many people are listening to Kendrick [Lamar], and actually understanding what he’s saying about alcoholism in “Swimming Pools”?

How do you talk about an art that’s changed so much over the last two or three decades to an audience that might vary in age?

I’m a diversity consultant, and in that role, I do a lot of stuff trying to engage people in meaningful conversations, trying let them speak freely on what they see. I try to get them from what they see in their life, to a point where they can see from other peoples’ point of view. We call it the sociological imagination. Try to see beyond the surface of things, and try to look at systematic change. If we’re going to move forward as a society, we need to get beyond individual blaming. None of us are individual, and we’re all interdependent.

To be genuine, I have to give my cultural story, and I want that group to give theirs. Really, if they listen to any music—my dad listened to the Carpenters as much as Steely Dan, and he listened to The Spinners, to Coltrane—we can work with that. If they talk to me about a genre that I don’t listen to, I explain what hip hop means to me, and ask them what that genre means to them. I’m looking for cultural conduits. I’m looking to get them to see them in me, because I see myself in them.

What made you want to join the Speakers Bureau?

The reason I wanted to join Humanities Washington is that I buy into the vision of having these interactive learning experiences that are conversations. When I looked at the application, it felt like a perfect fit for what I want Rap 101 to be, which is a way for communities to find some common thoughts and then say, “What are we going to do?” Let’s rap, let’s talk about it.

For information about how to book Eric Davis as a 2015-2016 Speakers Bureau presenter for your organization, please contact Zaki@humanities.org.