The scholars sat down with Spark to discuss female pop-culture icons, shifting social mores and the complexities of diversity. They’ll tackle the same topics live during next week’s free Think & Drink discussion at Seattle’s Naked City Brewery & Taphouse. Join us!

Jennifer K. Stuller and Amy Peloff love pop culture. And they particularly love the Leslie Knope character on Parks and Recreation because she’s a feminist on TV – one who actually comes out and says she’s a feminist.

Note: Please arrive early to secure a set in the main discussion area.

“Nobody ever says it,” they agree.

Neither Stuller nor Peloff has a problem making such a feminist declaration. Stuller is a co-founder and programming director of Seattle’s GeekGirlCon and the author of Ink-Stained Amazons and Cinematic Warriors: Superwomen in Modern Mythology

. Peloff is an affiliate assistant professor of gender, women and sexuality studies at the University of Washington and assistant director of its Comparative History of Ideas program.

Together, Stuller and Peloff hope to inspire discussion about the complexities of gender and diversity in the media at Humanities Washington’s next Seattle Think & Drink – Harlots and Heroines: Women’s Images in Media and Pop Culture – next Wednesday.

In preparation for this event, Humanities Washington sat down with Peloff and Stuller over coffee to discuss such topics as women in refrigerators, Dan Quayle and a succubus named Bo. 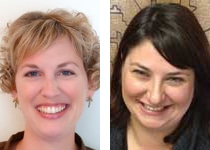 HW: What are some stock images of women in the media?

Stuller: Mary Sue came out of Star Trek fandom … She’s a teenager, she excels at absolutely everything, she graduated from Starfleet early, she may or may not have a relationship with one of the main male characters and she usually dies in a sacrificial way.

HW: So why is that popular?

Stuller: Well, it extends past that …. “Women in Refrigerators” syndrome is a trope that came out of comic books. Several years ago, (comics writer) Gail Simone wrote this blog post collecting all of the women in comics that have been de-powered in some way, murdered, raped, magically impregnated – which is also rape – and named it “Women in Refrigerators” after an incident from a Green Lantern comic where the hero came home to find his girlfriend cut up and stuffed in a fridge. So basically, if women are too powerful they can’t survive, and they also can’t survive if they’re needed to further the hero’s story. 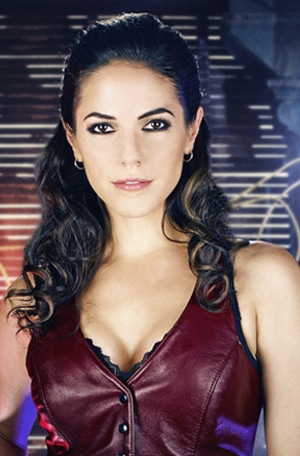 Both Jennifer K. Stuller and Amy Peloff are fascinated by Lost Girl’s Bo, a character they see as re-framing the power of the succubus archetype.

HW: Why do you think these female archetypes have staying power?

Peloff: There’s the assumption that we’ve been trained to adapt to what’s in front of us. So as a white woman seeing a white man as the main character on screen all the time, I’ve learned to identify with that and to make do. People of color have had to figure out how to accept the fact that they aren’t going to be represented on screen. So therefore there’s some kind of mental gymnastics that everyone, except for straight white males, is expected to do to identify with what’s happening onscreen.

Stuller: I was reading an article … about why superhero films are important and not just fluffy popcorn movies. (It) mentions Superman, Batman, the Hulk – all of these characters who are important to understanding our identity … and (it explains) how this is our modern mythology and how we play out our fears and dreams on the screen. But I read it and I was like, “You can’t even f***ing mention Wonder Woman?” The only person of color that was mentioned was Nick Fury (Samuel L. Jackson’s character in The Avengers)…. People are so used to it they don’t even think about it anymore.

HW: In general, how have portrayals of women in the media changed over the past several decades?

Peloff: Well, the ’70s had Mary Tyler Moore, which I love.

Stuller: And Wonder Woman, The Bionic Woman, Charlie’s Angels and Get Christie Love!

Peloff: It was clearly coming out of the second wave of feminism and trying to show that a woman can do anything a man can and still have some sense of femininity. “I can bring home the bacon and fry it up in a pan” and all that kind of crap. But the complexity of what it was wrestling with wasn’t really there.

Stuller: What we’re seeing now is more complex, in general. I mean, Bionic Woman was of its time. And it was pretty rad. Jaime Sommers inspired a lot of young women … . (But) it’s not Mad Men or Battlestar Gallactica.

HW: In recent years, have there been any pop-culture characters who do break out of that norm and challenge women’s roles?

Peloff: I think it’s a lot easier to see this stuff on television because it’s cheaper (to make). We’re both obsessed with Lost Girl, which I’m sure we’ll talk about (at the Think & Drink)…. In Lost Girl, the main hero is a succubus, so a woman whose power actually is her sex … the stereotypical, hyper-sexualized, claw-bearing horrible woman who uses her sexuality as a weapon to control and manipulate men. But Bo (the main character on Lost Girl) is able to re-frame that as a power at her disposal, not for manipulation.

Stuller: Last week, Liz Lemon (Tina Fey’s character) on 30 Rock was reconsidering having a child … . There’s this great scene where she’s standing by the elevator and this very harried businesswoman – I mean she’s totally like the epitome of early ’90s businesswoman – runs by. She’s got a coffee and a cell phone and a baby bag over her shoulder and this massive stroller. And she’s saying “Murphy Brown lied to us! She had Eldin!”

Stuller: And I think later Liz says (Murphy Brown) didn’t only have Eldin, she had the whole FYI team (to help her) … . Murphy Brown was such an inspirational icon of what a successful career woman should look like in the ’90s, and Liz is kind of in a similar role now, but doing very different things.

HW: Why does the image of women in the media matter?

Peloff: Dan Quayle held Murphy Brown up as this example of everything that was wrong with feminism: she was this single career woman who had a baby on her own with no father in the picture, and that was just a sign of the moral decay of the country … . These things (pop culture and current events) are just always in conversation with each other. It’s just kind of this giant reflecting game.

Stuller: And what’s reflecting, and what’s influencing, and what does that mean? Does it really matter? I totally think it does. Like the show Girls, which people are saying is great because, “I see myself on screen.” I see it and I go, “I’d really rather see young women standing up for themselves and being independent and finding jobs and telling their boyfriends what they want in bed – or their girlfriends what they want in bed.” And it doesn’t need to be a perfect portrayal of femininity – because there isn’t one, and we are complex and flawed – but I don’t think it needs to be disastrous (like it is on Girls).

Peloff: The diversity of femininity does and also doesn’t exist in the images that we see. It’s really easy to talk about “femaleness” and have it default to a white middle class-ness. That’s something I can really fall into just by talking about what’s on TV – you realize you’ve talked about white women for a really long time.

Stuller: These things are always much more complex than they appear. You can love things that are awful and you can hate things that are supposed to be positive. Things aren’t always totally subversive or totally offensive.