What does comic book historian T. Andrew Wahl read in his spare time? We’ll give you one guess. 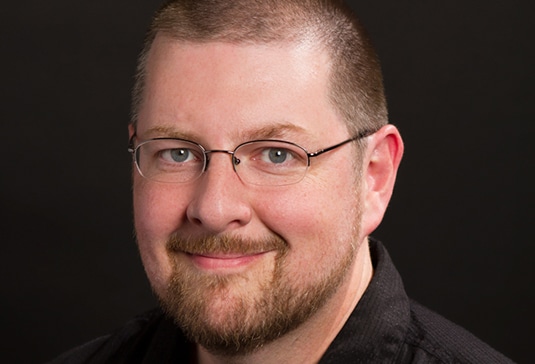 Reading Habits is a recurring series that asks authors, artists, community leaders, and others about their lives as readers.

T. Andrew Wahl is a comic book historian and member of Humanities Washington’s Speakers Bureau program. His talk “Superhero America: The Comic Book Character as Historical Lens” is given around the state. Wahl is also a journalist and an instructor at Everett Community College.

I’ve been doing a lot of reading in support of my Speakers Bureau talk, which deals with comic books and American history. I just finished rereading Sean Howe’s Marvel Comics: The Untold Story and am finally getting around to The Secret History of Wonder Woman by Jill Lepore. Both are fantastic reads about American culture that the non-comics fan can also enjoy.

Your favorite place to read.

On my front porch in my zero-gravity chair, preferably on a sunny day with a Diet Coke in hand and my cat, Ben, stretched across my lap.

On my iPhone. I still prefer good ol’-fashioned books, but my phone is always on me and loaded with reading material.

The Dark Phoenix Saga by Chirs Claremont, John Byrne and Terry Austin. This was the X-Men run that turned 10-year-old me into a lifelong comic-book fan. (And would later provide my youngest daughter, Katja, with her name!)

Probably Alan Moore. He’s a graphic novelist of amazing depth. I’ve reread works like Watchmen and Swamp Thing dozens of times over the years and discover new elements each time. That sort of constant discovery would be crucial if my library were to be limited.

Most books I love. Most recently I reread The Daughter of Smoke & Bone by Portland young adult author Laini Taylor. She’s an amazingly gifted writer: strong plotter, great characters, beautiful voice. She has an amazing way with words and I just love having her sentences in my head.

It’s ink on dead trees forever for me, I’m afraid. Probably the collector in me, but the user interface of the book is pretty amazing, too. Also: old book smell!

That’s a trick question because the mediums are completely different. Books have the time and space to go deeper into characters, back story, etc. They also tend to be the vision of a single creative voice. Movies, meanwhile, are by nature more visual and tend to get their creative energy from multiple sources (director, actors, set designers, etc.). Both mediums are capable of delivering amazing stories, but I don’t think its fair to compare the two. Generally speaking, I think the best movies made from books (including comic books) respect the source material but adapt it for the unique strengths of film.

A book you found too disturbing to finish.

I don’t think there’s ever been a book a put down because it’s been too disturbing. I like books that make me feel, even if that feeling is uncomfortable. It’s far more likely I’ll discard a book because it’s just not connecting. Life is too short and there are too many other books to read!

I’m never embarrassed by books! I was a comic-book fan from before geek culture took over the world. There’s no shame in my game!

For years I said “comic books” but that’s harder to claim in recent years with the ascendency of geek culture. I’m also a big young adult fan, which hits many of the same notes as the superhero comics of my childhood.

Occasionally a novel will get its hooks in me and I’ll read it straight through. Most recently, it was Dreams of Gods & Monsters, the final installment of Laini Taylor’s Daughter of Smoke & Bone trilogy. I read it for the better part of two days straight, minus time for the occasional nap. (Side note: That book was released on my birthday and I like to pretend it was a birthday gift to me!)