The Seattle Pacific University professor uses the “national pastime” as a lens to view on nation’s history – and finds “America in a microcosm.”

It’s hard to imagine America without baseball. Rather than imagine such a thing, history scholar William Woodward chooses to hold up baseball as a lens through which to view America. The sport has been a crucible where the nation’s social changes — not least the mainstreaming of ethnic minorities — have been acted out in miniature.

It doesn’t start and finish with the Babe and Jackie Robinson, either. In his talk for Humanities Washington’s Speakers Bureau, Woodward argues that by a number of measures, baseball is more popular now than it’s ever been. “Baseball’s never gonna outdo soccer in other places in the world,” he says, “but it’s going to have its place, and I think its future is solid.”

The Seattle Pacific University professor has multiple appearances scheduled this month, including a Tuesday (April 9) appearance at Edmonds Community College in Lynnwood as part of the Hazel Miller Conversations in the Humanities series. Woodward can be booked for future engagements through Humanities Washington.

Humanities Washington: Why does baseball keep such a hold on the American imagination, while other sports like football or soccer don’t?

William Woodward: I think the answer changes over time. I think football and basketball — thanks to, among other things, media hype — have moved into parity, if not prominence over baseball. So I want to separate the question: Why baseball emerged as it did and dominated for so long, and then why other sports, but not soccer, rose as rivals.

I think the answer to the first question — which is ironic, in light of what some people would say today — was that baseball was a faster, more vibrant, more engaging game as it emerged in the mid-1800s compared with other spectacles. Probably the most engaging or popular spectator sports before the Civil War were religion or politics. I don’t mean that as a joke — they were both grand spectacles. In terms of watching other people do stuff, baseball was a little bit all by itself. Horse racing, maybe, various kinds of street brawling, maybe, certainly some things in the arts — but in terms of something whose pace and action and energy appealed to people, baseball stood alone. Walt Whitman famously called it “America’s game” shortly before the Civil War because it was so fast, so unpredictable, but guided by rules, by bounds, by protocol. It wasn’t just a kind of free-for-all. So that speaks to its origins. 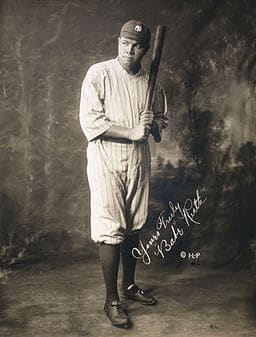 Babe Ruth, one of the most famous personalities of the first age of celebrities – and certainly one of the biggest names in baseball.

We also associate baseball with the rise of cities, with city rivalries, with the quest for something that was open air and involved physical activity, as more and more people began to be kind of confined to offices and business and so on. We’re not talking about he factory workers and the farmers, who had plenty to do by way of physical exercise just trying to survive. That goes on into the 20th century, and then we get into a change which has significant implications for baseball, and that’s the rise of mass media. That’s really the first great age of celebrities, and the biggest celebrity, Charles Lindbergh notwithstanding, was Babe Ruth. The advent of television changes things a little bit — and baseball was relatively slow to embrace radio, and it was also slow to embrace television, seeing it as a rival rather than a conduit. Though it takes a couple of decades to be established in American homes, football and baseball became even more media events than they had been participatory spectacles.

But then, why not soccer? And I’m not sure why that’s the case, other than soccer’s a latecomer. If you’re in the northern tier of Canada, you’ve added hockey to football, baseball and basketball. But America’s game in many ways is still baseball or the triad of baseball, football, basketball.

HW: Was it mass media that led to baseball rivalries becoming intercity rivalries?

Woodward: I associate that phenomenon actually with Ted Turner’s initial WTBS, his experiment in cable. It wasn’t the Dodgers — America’s team was the Braves, because that team was on all the cable boxes. I wouldn’t associate (earlier) mass media. I would associate American demographics, and particularly the post-World War II movement to the West Coast. If you look at the geography of baseball, until really 1957, when the Dodgers and Giants moved to California, it’s really northeastern quadrant. Only in ’53 did the two leagues, whose eight teams each were established in 1901, change. For more than 50 years, you had the same 16 teams, and they range from Boston to St. Louis. Then you get Kansas City in ’55. That’s still not very far west. Then all of a sudden a few years later, you have two West Coast teams, and people are willing to follow those teams because they migrated. … Television helps that — the Game of the Week showcased a lot of teams.

HW: Is it possible that baseball caught on as a subject for stories and poems because the game itself seems to contain a narrative? 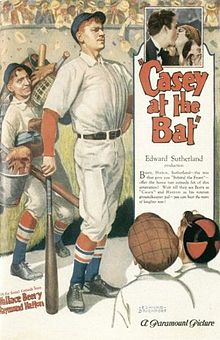 Baseball has inspired a great deal of art and storytelling. Casey at the Bat, probably the most famous poem about baseball, was made into a film in 1927.

Woodward: It’s been said classically that there are only two stories. One is, “somebody goes on a trip,” and another is “a stranger comes to town.” A kind of 1-A storyline is “someone goes on a trip but comes back.” I think you can do too much with this pop psychology or literary imagination, but there is something about baseball that is a journey and return rather than a conquest. … I think the structure of the game, set in a very symmetrical framework, creates a groundwork for the poetic and literary imagination to go places that maybe repeatedly scoring goals — hockey, basketball, soccer — or conquering territory — football — don’t lend themselves to. Yes, baseball is extremely sequential, but there’s no clock. The game could go on indefinitely if no one prevails at the end of the ninth inning. 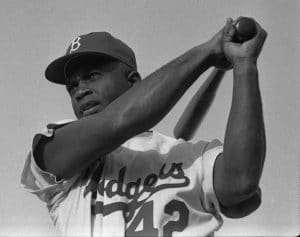 Jackie Robinson, one of baseball’s greats and a key player in Woodward’s presentation.

Woodward: It’s mutually interactive, and it could be argued either way. We had black athletic stars before Jackie Robinson — there was Joe Lewis, there were a number of black athletes in professional football already, certainly Jesse Owens in the 1936 Olympics. … World War II and the revelation of the Holocaust really shook America’s complacency about accommodation to race with the separate-but-equal regime. Black soldiers came back from the war, having served in separate units — and my father actually commanded one — but there was a certain expectation that when you wear the uniform in Italy or Normandy Beach or the South Pacific, that’s the color that matters. Truman orders the desegregation of the armed forces, an extraordinary civil rights revolution, one that gets less attention than the story of Jackie Robinson. … At almost about the same time, that same mentality said that it’s time to move away from separate-but-equal, the Major Leagues and Negro Leagues approach, to looking at the extraordinary athletes who’ve been toiling in the semi-obscurity of the Negro Leagues. This is a pool of talent. That it was Robinson rather than some more experienced Negro League players is significant, I think, because Branch Ricky was determined that the experiment in signing a black ballplayer was going to work because of the quality of the individual he selected. Robinson had to be sort of the perfect pioneer. And, ultimately, it killed him. Robinson felt a lot of the pressure that his successors didn’t feel quite so much.

HW: Why did baseball appeal to you as a subject?

Woodward: There are enough connections with the larger story of American history that is my field that it’s one of a number of windows into changes in society that I’ve enjoyed playing with. World’s Fairs is another, for example. Other kinds of popular culture expressions seem to me to be engaging, interesting and ultimately illuminating ways to get into culture. Yeah, I’m a baseball fan, so that became an obvious one. I think maybe the 40th anniversary of Jackie Robinson’s breakthrough, in ’87 … that maybe became one of the single most important connectors between baseball’s story and America’s story, such that it became obvious there is a lot of rich insight that can be gleaned from looking at how baseball tracks with the larger culture, from the rather sudden importance of New York City in American culture after the opening of the Erie Canal in the 1830s and ’40s to globalization, and particularly the movements of peoples from around the world into the United States in the last 20 to 30 years. You look at the human landscape of baseball today and see all of the various nationalities and ethnicities represented, and you see America in a microcosm.

3 thoughts on “Talking Baseball and America With Historian William Woodward”