Photo: David Haldeman. Back To All Blog Posts

The Battle that Made Chief Seattle

He was born an outcast—until a single act changed his life, and the whole of the Pacific Northwest.

When Euro-American fur traders began appearing on the west coast in the late eighteenth century, smallpox and other diseases they brought killed at least 50% of the Native population. Native societies crashed, and desperate groups began raiding to restore their populations, killing men and enslaving women and children. To find an event as apocalyptic in western history, we would have to go back to the Black Death in the fourteenth century.

It was during this time of brutal social upheaval that a child named Seattle was born. Partly because one his grandmothers had been enslaved by northern raiders—and Puget Sound tribes considered enslavement a permanent stigma both on the enslaved and his or her descendants—he began his life already an outcast. Further, one of his parents may also have come from the White River village called Flea’s House, near modern Kent. The village was regarded as socially low, probably because it had been decimated by disease that left many of its children orphans—making them, in the eyes of other tribes, poor marriage choices. Even though he was raised at a different village downriver called Stuk, Seattle’s supposedly tainted lineage bedeviled him. As late as the 1950s, George Adams, a state legislator and member of the Skokomish tribe near Shelton, derided him as “…an ex-slave who lived at Fleaburg.” 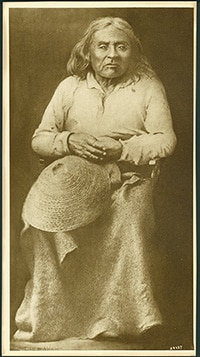 How did Seattle become one of the most respected war leaders and visionaries of his time, and two centuries later one of the most well-known Native Americans in the world? It all hinged on a single event—a battle an untested Seattle decided to risk as a young man.

While not especially tall, Seattle was robust, good looking, intelligent, and had a powerful, articulate persona that attracted notice on both sides of the Sound despite his supposedly lowly background. By the age of 20, Seattle was part of a confederation of tribes organized by his kinsman Kitsap, a Suquamish war leader. Consisting of tribes spanning central Puget Sound to the Cowlitz River, Kitsap formed the confederation to try to halt raids from the north. Their meeting place was Old Man House, an immense wooden longhouse taking shape on Agate Passage that separated Bainbridge Island from the Kitsap Peninsula. Kitsap invited each group to add a section to Old Man House as a sign of commitment. It extended nearly 600 feet—at the time it may have been the largest wooden structure on Puget Sound.

At one point, word reached the confederation that up-river raiders planned to make a pre-dawn raid on villages at Elliott Bay, so leaders from the bay met in council at Old Man House. Debating how to defend against the raiders, council leaders called for suggestions. There had already been several down-river raids, and everyone knew the complicated nature of the Duwamish watershed. At a point just above the confluence of the Black River, the valley narrows and the river makes a series of sharp bends.

After several ideas had been discussed and found wanting, Seattle asked to speak. But who would listen to someone from his supposedly low social standing?

A spirit power Seattle acquired as a youth, Thunder, was said to give him his powerful, intimidating voice. He demonstrated this at winter dances, moving down the center of a longhouse, booming out his spirit’s song as he shook his wooden, duck-shaped rattles. A distant cousin would later recall that when Seattle spoke in anger, it was the listener who shook.

So while Seattle’s proposal was a gamble on his part, the council listened.

He suggested dropping a large fir tree growing on the bank near a riverbend so it spanned the water only a few inches above the surface. The night-time raiders would not see the barrier until it was too late, and warriors Seattle had hidden in the nearby woods would ambush them in their confusion. Impressed, the council gave Seattle command. 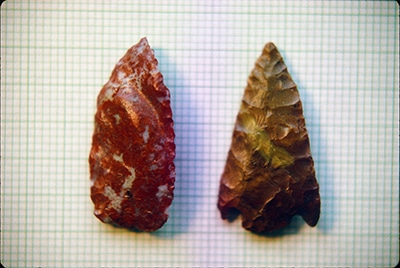 Arrowheads found at the site of the battle on the Duwamish. No consistent Native presence was known at the site, leading the author to believe these likely came from the attack. Photo courtesy of David Buerge.

A day before the expected raid, Seattle and his followers reached the bend. Using stone adzes, it took much of the day to drop and position the tree so as not to be readily seen in the dark. As night came, they waited. Sure enough, with the rhythm of paddles, five canoes rounded the bend.

Immediately, three collided with the barrier and were swamped before their crews knew what happened. At that moment Seattle and his warriors leapt shouting from their hidings and showered the struggling men with arrows. Those gaining shore had their heads bashed with clubs. The crews reaching the bank were met with more arrows, clubs, and knives in a brutal, bloody rout.

It was a smashing victory. To his growing reputation, Seattle added bravery, murderous skill, and, best of all, success.

A few years later, then a respected warrior, he joined Kitsap and hundreds of Puget Sound warriors in an armada of war canoes that attacked northern raiders—the Cowichans of Vancouver Island—in their home waters. It was a tactical disaster but a strategic victory that stopped northern raiding. Kitsap eventually established peace with the Cowichans through intermarriage, a traditional means by which groups encountering a powerful invading people supplanted violence with the obligations of marital ties and kin etiquette.

For decades, Seattle remained a fierce war leader who led many terrifying raids, which frightened many of the colonizing Whites. When Britain’s Hudson’s Bay Company entered the region in the 1830s, the clerks at its Puget Sound trading post, Fort Nisqually, attached more negative epithets to Seattle in the Journal of Occurrences, its daily log, than to any other Native leader. One writer even inked his hope that Seattle’s own people would murder him.

He single-mindedly attempted to build a peaceful, bi-racial community where Native and White people could prosper.

But among his own he enjoyed a reputation for openness and generosity. Outliving three of his four wives, he enjoyed matchmaking, and he had a quirky sense of humor. Hosting a potlatch and standing on a catamaran close to shore loaded with gifts, he threw them into the water and enjoyed watching his laughing guests plunge in to retrieve them. During a wrestling match he greased an athlete he sponsored with tallow so the opponent could not keep hold of him. When not pursuing foes in his great canoe propelled by teams of paddlers, he traveled the Sound accompanied by a flotilla of kin, and approaching other parties he would bellow, “It is I, Seattle!” to reassure them of his peaceful intent.

When he reached his late 50s, Seattle was of an age when leaders were expected to council and broker peace. Native tradition held that leaders were expected to be “slow to take offense,… to maintain peace in the family,” and “talk good” to others. This was not Seattle in his earlier days, but observing the pace of American settlement, the settlers’ aggressive resolve and penchant for violence—and mindful of Kitsap’s accommodation with the Cowichans—he abandoned his role as a war leader and became an impresario, inviting Americans to visit and settle in his homeland. Because most had not experienced his earlier behavior, American settlers did not appreciate just how breathtaking his transformation was. He single-mindedly attempted to build a peaceful, bi-racial community where Native and White people could prosper. His powerful reputation, brilliant oratory, and extraordinary tool-kit of skills made this seem possible, and so impressed the Americans he brought to the east side of Elliott Bay that they named their community after him.

Sadly, his vision of a peaceful, multiracial society based on Native tradition did not survive. Although a majority of the early young, male American settlers were happy to marry Native women, their more elitist and racist colleagues dismissed them as “Squaw-men.” These later newcomers had no intention on intermarrying with “savages.” Instead, officials drove Native people to reservations far from the frontier settlements in whose creation they had so enthusiastically participated. It took more than a century before White Americans began to contemplate how savage was their own behavior.

Seattle is the largest city in the world named after a Native American. His speeches, real and apocryphal, are considered some of the greatest ever made. All of this had its origin in a chance he took, a battle he won, and a legend birthed on the lower White River two centuries ago. His character and vision make him an inspiring namesake for a city whose residents have yet to grasp how his upbringing, bravery, and wisdom enabled him to envision a community marked by a devotion to progress and humanity. Only by emulating his tolerance and vision may the city eventually achieve its claim of being world-class.

avid Buerge is a historian to the Duwamish tribe. He is the author of Chief Seattle and the Town that Took His Name, published by Sasquatch Books, from which this piece was adapted. He is currently presenting his free Humanities Washington Speakers Bureau talk based on the book, “Who Was Chief Seattle?,” around the state. Find an event>