The Myth of the Traditional Family

“We tend to have so much nostalgia,” says sociologist Teresa Ciabattari. “We think that today’s families are so complicated, and that in the past they weren’t, which of course is not the case at all.” 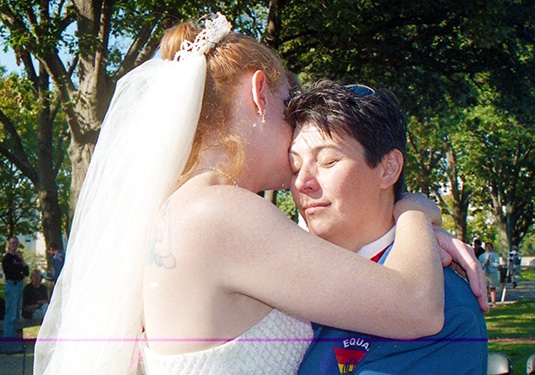 Family may be as much a matter of whom you know as where you come from.

Teresa Ciabattari’s Speakers Bureau talk “Family Diversity: Past, Present, and Future” asks audience members to think about whom they consider part of their family, and learn and share the ways definitions of “family” are changing. When thinking about their families in the big picture, participants think of steps, halfs, friends of family, or in-laws.

“We have family relationships with people who we’re not legally related to,” Ciabattari says. “It’s what researchers call an expressive definition of family. Family is what we do — it’s based on relationship, rather than legal structure.”

The associate professor of sociology at Pacific Lutheran University has studied family and its evolution her whole career, tracking the external forces — class, changes in law, broader definitions of marriage — at play in the American dynamic.

“As much as we have changed as families, there are continuities,” she says. “It can feel like these changes came out of nowhere, but they really didn’t — it’s been going on for decades.”

I’ve lived with my partner for years and we have children, but we’ve never married. How common, or uncommon, is that in 2015?

It’s pretty uncommon, actually. The cohabitation experience is very common — most new unions that get formed in the United States are cohabitations rather than marriage. And about 40 percent of births in the U.S. are to unmarried women, but most of those women are cohabiting. What’s unusual about your circumstance is that you’ve been cohabiting for such a long period. So 90 percent of cohabiting relationships end either with a breakup, or transitioning to marriage within five years. What you’re doing as a long-term alternative to marriage is more along the lines of the Northern European model. In the U.S., it hasn’t taken off.

So I’m ahead of the curve. How traditional is the “traditional” family anyway? A majority of women have been in the workforce for decades, and divorce and remarriage are commonplace. So why does this definition still cling?

We tend to have so much nostalgia. We think that today’s families are so complicated, and that in the past they weren’t—which is not the case at all. There’s also evidence, when you look at historical documents, that people have always been complaining about changes to the family structure. You have Teddy Roosevelt in the early 1900s complaining about the high rate of divorce. With families, the other thing that complicates it is that most often we compare today’s patterns with what was happening in the baby-boom postwar period, from the late ’40s to the early ’60s. And that time period was very historically unusual — we had low rates of divorce, we had high rates of fertility, we had people getting married at younger ages than they had in previous generations. So when you look at the trend charts over the 20th century, you see fertility going down in the early 1900s, and then you see it jumping in the 1950s. You see the divorce rate climbing in the late 1800s, and then dipping. So this is a very unusual time period, and when we look at this period, it exaggerates the differences between then and today. It’s true that many white, married women were not in the labor force in the early 20th century — but the single women certainly were. And many women found other ways to earn money. Even if they weren’t doing work outside the house, they were taking in laundry, they were taking in boarders, they were taking in piecework at home.

Certainly, the big change is you’re going to have more same-sex couples that are married, and as a result, get divorced rather than just break up. Now we’re going to have government data on marriage and breakup for same-sex couples, and it will be interesting to see if their rates of marriage formation and dissolution are similar. My guess is that is going to be similar, and the same dynamics you see with straight couples, you’ll see with same-sex couples. The expansion of legal marriage to same-sex couples is in so many ways very consistent with redefinitions of marriage that have been going on for well over a hundred years. In the late 1800s, when marriage started to be redefined as a union of two people in love, when the foundation of marriage came to be love and partnership — that wasn’t always the case. In previous eras, marriage was an economic arrangement. It was an exchange of resources, and you really needed to find a partner who was going to be a hard worker, because your survival, in a very literal way, depended on it. With industrialization that started to shift, and people started to fall in love before they got married. There’s a certain sort of logic and consistency in our time to expanding that to same-sex couples. If marriage is about romantic love and commitment and companionship, then it’s difficult to make the argument that that should not apply to same-sex partnerships.

Is the number or gender of parents in a child’s life truly an indicator for how that child will prosper in school or into adulthood?

The research on same-sex parenting has shown very consistently that it’s pretty much the same as opposite-sex parenting. Kids who grow up with same-sex parents are similar in all sorts of outcomes as kids who grow up with straight parents. In terms of single parenting, there’s a correlation with child outcomes where on average — and that’s a very important qualifier — on average, kids who grow up with single parents tend to have lower levels of educational achievement, they have more behavior problems in school, and so on. But it doesn’t mean that single parenting is causing that. What seems to be going on are several things. One is economics: Single parents are more likely to be poor, and it’s that poverty that contributes to the kids’ negative outcome. The second thing just has to do with stability: The more transitions a child experiences, the higher their risk of negative outcome. So if a parent is having different romantic partners moving in and out of the child’s life, if they’re changing residences often, those are other things that contribute to parenting outcomes. The other thing that researchers have been paying attention to more lately is getting away from only looking at averages. Comparing a kid raised by a single parent and a kid raised by married parents on average gives an incomplete picture. There’s a really wide variation. A lot of kids actually do better when their parents divorce, because they were living in a high-conflict family situation. And a lot of kids do have negative outcomes. But really, most kids come out fine either way.

Do you find that audiences tend to reject statistical assessment that doesn’t reflect their experience?

I’ve had one or two people question it and just dismiss the data — “You can’t believe anything the government tells you.” But for the most part, people are very open to it, because it reflects their reality, it reflects what they see around them, it reflects the complexity they see in their own families. Even if they live in a traditional family, I think most people are open to it. What’s most controversial is same-sex marriage — when I talk about that, I think not everyone approves, but they don’t really question the data. Now that the Census Bureau is asking questions about same-sex relationships as well as cohabiting relationships, we do have a much broader picture.