“Unveiled: Feminism, Orientalism, and Perceptions of the Middle East” and “Earth, Interrupted: Climate Change and Geoengineering” will close out spring season. 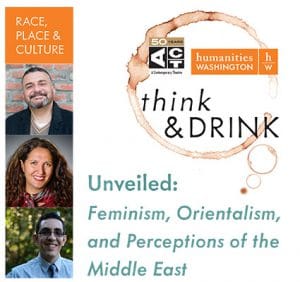 JUNE 8: “Unveiled: Feminism, Orientalism, and Perceptions of the Middle East”

“For decades, many women believed they had to choose between their Muslim identity and their belief in gender equality,” writes Elizabeth Segran in The Nation about the rise of Musawah, a global Islamic feminist movement that means “equality” in Arabic. What does it mean to be a Middle Eastern feminist? And from dramatic events like the attempted murder of Malala Yousafzai to the everyday wearing of the hijab in many parts of the Middle East, is the lens through which the West views Middle Eastern women too focused on their oppression—either real or perceived?

Can we fix the climate like it’s a leaky faucet? Should we? In late June, two Think & Drink events will take the big questions surrounding geoengineering and climate change out of the realm of academic conferences and into two Seattle bars. “Earth, Interrupted” will explore the promise, problems, and ethical implications of using technology to intervene in the Earth’s natural systems.

“Installing mirrors in space to reflect the sun or spraying sun-blocking particulates into space might sound like science fiction, but tweaking the climate in these ways is being legitimately proposed,” said Zaki Hamid, program director and Humanities Washington. “We want to hold a public conversation that asks a question rarely addressed in the media: Are these proposals ethical?”

A SELECTION OF UPCOMING EVENTS AROUND THE STATE

PROSSER: June 12, 7:00 p.m., Princess Theatre: What do we envision when we hear “American family?” How is the definition of ‘family’ changing and why? American families are more diverse than ever, and the structures of families are changing through social and cultural shifts. Join Sociologist Teresa Ciabattari at “Family Diversity: Past, Present, and Future” to explore the complexity and history of modern American families.

BURIEN: June 18, 9:00 a.m., Navos: What stereotypes persist for Asian Americans? How is life in America different for Asian refugees than for Asian immigrants? Histories, traditions, and cultures vary greatly between different Asian groups, making the experience of confronting stereotypes and others’ preconceived ideas of “Asian” disturbing. In “Slanted Eyes: The Asian-American Experience,” psychologist and former broadcast journalist Sam Louie uses spoken word poetry and a presentation to guide audiences to better understand the depth of cultural issues that confront Asian Americans today.

RICHLAND: June 18, 7:00 p.m., Richland Public Libraries: What does it mean to be Muslim in a modern world? What if much of what we believe about Islam is incomplete or simply wrong? For more than 1.3 billion people across the world and many people in Washington State, Islam is not only their religion but also a way of life. Led by scholar David Fenner, “Islam 101: Perceptions, Misconceptions, and Context for the 21st Century” focuses on Islam and the many aspects that form the substance of a rich culture, traditions, and a way of life.

BREMERTON: June 27, 3:00 p.m., Sylvan Way Kitsap Regional Library: When conversations about gender, race, or ability are met with hostility, how do geeks who are committed to social justice foster inclusivity? Inspired by their love of fandom, tech, comics, games, television, costuming, and conventions, they are using their powers of good to challenge the self-appointed gatekeepers of geekdom with efforts that ensure their beloved culture is progressive, representative, and inclusive. Join GeekGirlCon Co-Founder Jennifer K. Stuller for “Using Their Powers for Good: How Geektivists, Geek Grrls, and Gaymers Are Creating More Inclusive Communities,” a talk that explores the people and organizations that are using community-building to create alternative spaces and crowd-sourcing to circumvent traditional modes of production, media criticism to challenge and raise awareness, and performance to subvert gender norms.

VANCOUVER: July 2, 7:00 p.m., Clark County Historical Museum: How did Roosevelt achieve so much? In 1903, President Theodore Roosevelt made a stop in Washington State as part of a 17-city national tour, inspiring thousands of Washington residents on both sides of the Cascades. “Theodore Roosevelt: Wilderness Warrior in Washington State” is a presentation that combines music, anthropology and history led by Scott Woodward. He explores how the formation of all of these refuges, parks and monuments resulted from the particular leadership methods used by President Roosevelt and his personal mission to preserve natural resources. Woodward also discusses Theodore Roosevelt’s signature approach to getting things done: combining politics with citizenship that crossed all political lines and built legacies for future generations, as well as establishing the sense of place we have today.