The Clark County Historical Museum hosts A Taste of Native America to highlight the local food and traditional Native American food culture of the region. 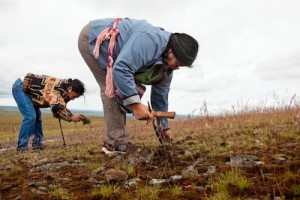 Long before Washington was a state, food was bringing people here together. For the area’s Native inhabitants, hunting, fishing and gathering provided vital sustenance, while ceremony and ritual gave food its important place in Native culture.

A new traveling exhibit at the Clark County Historical Museum delves into this rich tradition, past and present. Opening this past July, A Taste of Native America showcases local foods and the vibrant Native American food culture in Clark County. This exhibition is built around a Washington State Historical Society traveling exhibit that was brought to Clark County with support from a Humanities Washington grant; it will remain open until Dec. 29.

“The general public has gotten too far removed from the food process,” said Susan Tissot, executive director of the Clark County Historical Museum. This exhibit is a way “to get people to think about food sources and where their food comes from,” she said.

Who: The Clark County Historical Society & Museum
Established: The historical society was founded in 1917 and established the museum in 1964
Mission: The Clark County Historical Society is dedicated to the collection, preservation, and interpretation of the cultural history of Clark County and the Pacific Northwest, and to sponsoring educational programs and exhibits for the enrichment of all members of the public.
Serves: 15,000 visitors annually, 70,000 annually via digital services
On the Web: cchmuseum.org

At the same time, it showcases the fact that in Clark County the “native community is alive and well,” said Tissot.

Exhibit displays include dried foods, instruments like a root digging stick and beaded bags with Camas flowers and deer designs. There are also several baskets on display – “the Tupperware” of traditional Native American food preparation, according to Tissot. For the exhibit, local artist Lillian Pitt also created a mixed-media art piece that incorporates a salmon drying rack.

Food has long been a cause for community gathering in southern Washington. Celilo Falls on the Columbia River was once a center of Native American business and trade, where dried foods were exchanged. And food continues to bring the people of the region together: The museum will put on programs to highlight the connections forged by local food – including the Harvest Fun Day on Sept. 22, to bring families out to a local farm [Details].

The Washington State Historical Society created the interpretive panels for the A Taste of Native America traveling exhibit, which were supplemented with the Clark County Historical Museum’s artifacts.

Tissot said the support of Humanities Washington grants “has enabled us to bring a lot of programs to the museum that we might not otherwise be able to do.”

Beginning in 2013, Humanities Washington will be teaming with the Washington State Historical Society to bring a new traveling exhibit to communities across the state: Hope in Hard Times.