The Caldecott Honored children’s author on her latest book Viva Frida, the turmoil that sparked her fascination with children’s books, and her upcoming project with Sherman Alexie. 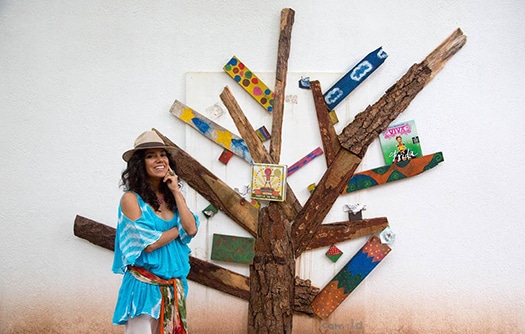 An old woman finds death at her door, telling her it’s time to leave.

“Just a minute,” she says. “I will go with you right away, I have just ONE house to sweep.”

The delaying tactic works. Death waits, and the woman performs other tasks in incremental amounts: boiling two pots of tea, making three pounds of corn into tortillas, slicing four fruits. On each page of Just a Minute: A Trickster Tale and Counting Book, the requisite numerals are written in English and Spanish in large, wavy block letters that could have been culled from a carnival sign. ONE/UNO, TWO/DOS, THREE/TRES.

In this way humankind’s greatest fear, in the form of a skeleton in a top hat, is not only defeated by a woman’s hard work and creativity, but is won over by her. At the end of the book, he joins her for the birthday party she was preparing for all along.

Just a Minute and other books by Yuyi Morales often meld fear, in the form of death or ghosts or monsters, with language lessons and messages about determination, creativity, and the importance of storytelling—themes not only present in her work, but embodied in their author.

Language, learning, and fear combined to help stir a creative spark in Morales. The four-time Pura Belpré award winner and author of numerous books including Niño Wrestles the World, Just a Minute, and the just-released Viva Frida, was born in Xalapa, Mexico. After college, she immigrated to the U.S. with her American fiancé and their young son, but she spoke very little English.

“It was very hard at first, because I lived a whole year in my mother-in-law’s house and they spoke only English,” Morales told Publisher’s Weekly. “I became terrified of answering the telephone, worried I would not understand what the caller was asking.”

The local library—the children’s section in particular—proved her salvation. She found comfort in the simple juxtaposition of words and images, and used children’s books to grow her English skills. She eventually became fascinated enough with the medium to become a children’s book author herself.

Her latest book, Viva Frida, about the life of Frida Kahlo, has taken her career to new heights: In February, it won a Caldecott Honor.

Humanities Washington brought Morales to Washington State in late February, where she gave presentations in Walla Walla, the Tri-Cities, Sunnyside, Yakima, and Bellingham.

Humanities Washington: Were children’s books a large part of your childhood growing up in Mexico, and was that what led you to your career as a children’s illustrator?

No, not at all actually. Back in Mexico when I was growing up they didn’t really have books for children. It wasn’t part of my childhood at all. I read some of the books that my parents had which were adult books, though I didn’t really understand them. When I was growing up I would have never ever imagined that making, writing, and illustrating children’s books could be a career or even a possibility. It wasn’t until I was an adult and came to the United States.

Do you think the absence of children’s books when you were younger is what intrigued you about them later on?

Yes definitely. Comic books were what I was reading. I read a lot of Spanish language translations of American comic books. I read also a lot of Mexican productions. There were a lot of artists doing these comic magazines, graphic magazines I guess you’d call them.

It sounds like you’re particularly attracted to visual narratives.

I love the visual narrative.

What is it about the visual narrative that inspires you more than written text?

When I came to the United States I had no experience with children’s books and I didn’t speak English. I knew very few words. And one of my first important encounters was with picture books for children. These books were for children 4-8 years old. And they were very, very important to me because, just like children who don’t know how to read, I was going through the same process: I knew a few English words—enough to kind of find them in these books and just know they were there—but I was unable to make sense of the rest of the story. But because the text was sparse, that could be very helpful.

But the main thing was they had illustrations. The illustrations made all the difference in the world because I was able to read from the illustrations and figure out the text. So from the very beginning I learned from picture books. Ever since then I’ve made them part of my life in many ways.

I had a baby when I came to the United States and we learned and we grew with these books. I learned how to read and then I decided I wanted to try to make them. They just became an important part of my life. But you are right that it is because of the visual narrative they gave me.

I think you might have answered my next question, which was: Did your experience as an immigrant to the US, and feeling intimidated by the language barrier, lead you to finding comfort in visual images?

Yes, yes. Absolutely. I didn’t speak much English at all. I was a new mother. I didn’t know what I was going to do. I didn’t have a job. Everything I studied back in Mexico was good for nothing, especially if I didn’t speak English. That was part of my experience. So it was partly about the language barrier with books but also the fact that I needed to feel like there were familiar things [from Mexico] around me, of which there were very few. A way to bring them into my life was through making stories and illustrations. So my books are very influenced by where I come from and the customs and things that I missed at the time. My books are a combination of my culture growing up, but also my entering a new culture as an immigrant and having to learn—to re-learn—everything so that I’d actually be able to survive in a new country.

How did the idea for Viva Frida come about?

It came from many places, but one of them was from when I was a kid. I knew about Frida Kahlo the painter, but it was hard to relate to her—to understand her—and her artwork. But I knew that she loved to paint self-portraits. I like to do the same too. I’m not great, but I loved learning to draw by drawing my own face, and sometimes when I did it I thought about Frida Kahlo. I imagined this well-known artist. I thought, “If she could do it, why can’t I do it myself?”

The other thing was when I came to the United States many years later. Although I knew about Frida Kahlo back in Mexico, she really wasn’t that famous back home. But in the US she was a superhero. Everyone used her as a symbol for many different things. And I started realizing that I wasn’t sure that the sense some people have about Frida in the U.S. was the one I had from her. I wanted to learn more about Frida Kahlo through my own perspective.

So I had this idea for a while about creating a book about her. I also wanted to because she was a woman who, in the creation of her own identity, from how she dressed to what she did to her political activities—all of those things, were part of her own pride in who she was. And it was through creating this identity that she also was creating art.

It wasn’t only because of her painting [that I was inspired]. She was very proud of her Mexican heritage, and she showed it in the way she dressed and all sorts of things. I had just come to the United States, a place where I didn’t know how I felt about my identity as a Mexican woman, and it was her pride that had an impact on me and made me realize that I had things to be proud of too. 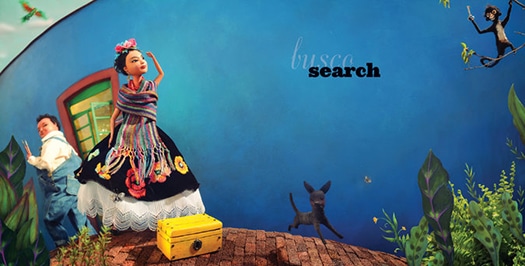 I understand that you’ve had this idea for a while, but the book itself came because you drew the idea out of a hat?

Yes! [laughs] In my writer’s group every year at the end of the year we give ourselves an assignment. We put some words and ideas for books on pieces of paper and draw them from inside a hat. Whatever those words are, we use them to create a new story, and at the last meeting of the year we have to come up with that story. We can use the words any way we want—we can use those words in the story, or we can use them to give you an idea—anything. And the words I drew that year were “baby book.”

So I had been wanting to create this book about Frida Kahlo and I thought, “Ok, I’m going to use this frame, and the frame is ‘baby book.’” So I started to think: How could I create a book about someone as complex as Frida Kahlo—one that could become a baby book, a book that a baby might relate to and understand? I came to this place where I wanted to show in this book something simple but meaningful, and that also related to little kids. So [the book] became about how we have everything we need to be creative. The text became about how we all see, we all search, we all play. The idea of the story comes from the simple things we are all capable of doing that can lead us to be creative people just like Frida Kahlo.

What’s your next project?

I have a book that I’m about finished with. It’s a picture book written by Sherman Alexie. I can tell you just a little bit about it. It’s Sherman Alexie’s first picture book. It’s a book about a boy, and the title so far is Thunder Boy. It’s about a boy and his name—how he’s named after his father, and how they both have the same name. He’s searching for a self; he’s trying to come up with a name that reflects what he’s good at and what he does, and in the process, he also finds a connection to his father. It’s great—beautiful.

You just completed a tour of Eastern Washington and Bellingham. What message do you hope kids took away from your presentations?

I hope they fall in love with books. I loved seeing this special time where parents come and bring their children and look at books—it’s like a party. I hope that what happens is the children see reading books, creating books, loving books, is a celebration. And that books can be a part of everything beautiful in life. And that hopefully they’ll have them next to their beds, on tiny tables in their bedrooms, everywhere they end up in life. And also that they can use these books to practice being the heros in their own lives. I’d love that.

1 thought on “Viva Yuyi: An Interview with Yuyi Morales”